DOLORA ZAJICK, who over the span of a forty-year career has established herself as one of the most distinctive voices in opera and a preeminent dramatic Verdi mezzo-soprano, has announced her plans to retire from the opera stage in a statement issued today by her publicist. Zajick's final performance will take place at the Metropolitan Opera in the spring of 2020, when she will make her role debut as Kabanicha in performances of Janáček's Káťa Kabanová scheduled for May 2, 6 and 9.

Zajick, who in 2005 became one of the first artists to receive an Opera News Award, began her career in 1982 when she won a bronze medal at Moscow's Seventh International Tchaikovsky Competition. After graduating from Manhattan School of Music, Zajick was recruited for Columbia Artists's vocal roster, and in 1983 she joined San Francisco Opera’s Merola Program and subsequently became an Adler Fellow. She made her professional debut at San Francisco Opera as Azucena in 1986, and the role would also serve as the vehicle for her Metropolitan Opera debut in 1988, the same year the mezzo debuted at Lyric Opera of Chicago as Amneris. Zajick has sung more than 260 performances with the Met, and her seminal interpretations there have included roles ranging from Verdi's Azucena, Amneris, Eboli and Ulrica, to Rusalka's Jezibaba, Santuzza in Cavalleria, Marfa in Khovanshchina, Adalgisa, Elvira Griffiths in Tobias Picker's An American Tragedy, the Countess in Queen of Spades and Gertrud in Hänsel und Gretel. Elsewhere, Zajick has expanded her repertoire to comprise Laura in Ponchielli’s Gioconda, Mamma Rosa in Cilea’s L’Arlesiana, Madame de Croissy in Dialogues des Carmélites, Ortrud in Lohengrin and Mrs. Grose in Britten's Turn of the Screw.

In 2006, Zajick founded the Institute for Young Dramatic Voices, a Nevada-based training program intended for "large or unusual voices," designed to foster their development according to their unique needs, and to help these young singers reach the world stage. The program offers a three-week summer intensive that includes studies with coaches and voice teachers skilled in the training of dramatic voices.

Re: Dolora Zajick to retire

We saw her quite a few times over the years including last season's Aida-enjoyed her alot. Len
Top

Re: Dolora Zajick to retire

lennygoran wrote: ↑
Thu Sep 12, 2019 7:00 am
We saw her quite a few times over the years including last season's Aida-enjoyed her alot. Len

Dolora Zajcick has made few recordings, but has appeared in several MET telecasts, most notably in my mind as Azucena with an interpolated high C with conductor Armaliato roughly 10 years ago. I admire her tremendously: she's been a reliably great singer throughout her great career at the MET.

Some time ago she recorded a recital album for Telarc: it's still in print and highly regarded: 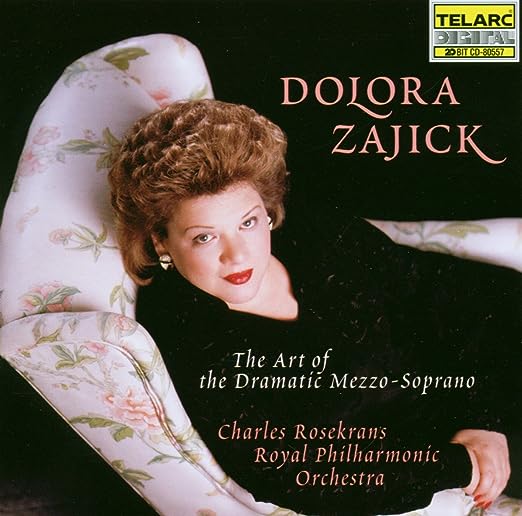 Users browsing this forum: No registered users and 42 guests