Reading the article I came upon this:
"The Metropolitan Opera offers similar advice on its website: “Tip: Snap a pic of the cast during curtain call!” There's a nice 18 second video clip if you can get to the site. Regards, Len 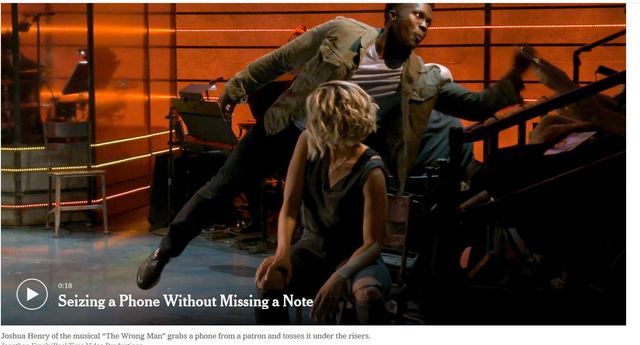 A seized phone. A stopped concert. A text from Rihanna. All are new fuel for a heated debate about theater etiquette in the digital age.


By Michael Paulson and Michael Cooper

Joshua Henry, the star of a new Off Broadway musical called “The Wrong Man,” had tried repeatedly to signal his disapproval to the man in the onstage seating who was using his smartphone to capture his performance, but he wasn’t getting through.

By the third song, Mr. Henry had had enough. So he reached into the seats, deftly grabbed the phone out of the man’s hand, wagged it disapprovingly, and tossed it under a riser — all mid-song, without skipping a beat. “I knew I had to do something,” he explained later.

Just a few nights earlier, in Ohio, the renowned violinist Anne-Sophie Mutter had stopped playing Beethoven mid-concerto to ask a woman in the front row to quit making a video of her. After the woman rose to reply, she was escorted out of the hall by the Cincinnati Symphony Orchestra’s president, and the music resumed.

Both artists were cheered — first in person, later on social media — for taking a stand against the growing ranks of smartphone addicts who cannot resist snapping pictures and making recordings that are often prohibited by rule or by law, that are distracting to performers and patrons, and that can constitute a form of intellectual property theft.

But such confrontations are fueling a new debate about digital-era etiquette. No one likes a ringing cellphone to interrupt a cathartic moment. But both theater and classical music have aging fan bases and a desire to attract younger and more diverse audiences, and some suggest that an emphasis on behavioral restrictions is a form of off-putting elitism.

“It’s turned into a battle over who belongs, and who gets to set the rules,” said Kirsty Sedgman, a lecturer in theater at the University of Bristol and the author of “The Reasonable Audience,” a book about contemporary debates over theater etiquette.

“Everyone goes into the theater thinking their own personal vision of what theater should be like is clearly the right one,” said Dr. Sedgman, who noted that expectations that audiences will be reverential date only to the 19th century, and that in Shakespeare’s time patrons were famously rowdy.

On the night a few weeks ago when Rihanna visited Broadway to see the edgy “Slave Play,” she texted the playwright, Jeremy O. Harris, during the intermission-free show. Instead of chastising her, he celebrated the exchange on Twitter, saying, “When my idol texts me during a play I’ve written, I respond.”


Predictably, his tolerance of her texting prompted a backlash. But he was unapologetic.

“I’m not interested in policing anyone’s relationship to watching a play ESPECIALLY someone who isn’t a part of the regular theatergoing crowd,” he said on Twitter.

The ultimatum by Ms. Mutter, one of the world’s leading violinists, prompted criticism — and not only of the videographer.

One dissenter argued on Twitter that “people who wholly submit to and enforce outdated/archaic concert rituals that require insane amounts of cultural capital to begin with are going to be completely irrelevant in about 15 years’ time.”

Many a performer-vs.-machine confrontation has become the stuff of legend.

Patti LuPone famously seized a phone from a patron at an Off Broadway show. Lin-Manuel Miranda declined to greet Madonna backstage because she was texting during “Hamilton,” and earlier this year in Puerto Rico he improvised a lyric change in the song “My Shot” to rebuke a woman taking a video. (“I got a lot of brains but no polish” became: “Lady filming in the fourth row, please stop it.”)

Then there was the time an actor in “The Cher Show” tweeted at Kanye West, mid-show, for using his phone. In an unforgettable defense, Mr. West later claimed he was so impressed by the musical he wanted to take notes.

Presenters are now trying to adjust and write new sets of rules.

This fall Lincoln Center will make four concerts in its White Light Festival cellphone-free, using Yondr, a service where audience members can stash their devices in locked pouches during performances. The service said this will be its first use in classical music. (Both Madonna and Rihanna have used Yondr to create phone-free spaces at their own events — Madonna for her Madame X tour, and Rihanna for her Savage x Fenty show.)

But others are trying to embrace the digitally tethered: Some orchestras, including the Philadelphia Orchestra, have experimented with letting people keep their phones on during some concerts and offer an app to guide people through the music. The Boston Symphony Orchestra does this, too, at select “Casual Fridays” concerts, in certain designated seats.

And then there are the compromises: When Bruce Springsteen was on Broadway in 2017 and last year, the production put an insert in the Playbill, urging fans accustomed to rock concerts not to use their phones during the show, but promising that Mr. Springsteen would stay onstage during the curtain call long enough for people to take pictures. The Metropolitan Opera offers similar advice on its website: “Tip: Snap a pic of the cast during curtain call!”

The issue is complicated because so many audience members have become habituated to photographing and videotaping sporting events, pop concerts, even dinner. And the truth is that live performers, who have long battled piracy and bootlegging, also rely on fan-fueled social media to bolster ticket sales.

Some observers suggest that the restrictions on audience behavior are snobbish, elitist, or even manifestations of white privilege.

Writing about the “Slave Play” texting contretemps in The San Francisco Chronicle, the critic Lily Janiak argued: “What inflames American theater about Harris’s stance isn’t that people are using cellphones in a theater, but that he’s a young black man unapologetically claiming the right to question old norms and forge new ones in a historically white institution.”

Ms. Mutter, the German violinist who stopped mid-concerto, said she was in favor of sealing phones at concerts. In her first interview about the Cincinnati incident, Ms. Mutter said that she had grown distracted as she played the first movement of Beethoven’s Violin Concerto because a woman in the first row was holding up her phone and filming her. After Ms. Mutter shot her stern looks, she said, the woman put down her phone.

“The first movement is over, and I’m trying to concentrate and stay calm,” Ms. Mutter recalled. “Then she takes out a second phone, and a power bank. I continued the second movement, but it’s already boiling in me. I’m totally out of the flow.”

“I feel violated in my rights, of my artistic property,” she said, noting that unauthorized filming is illegal. “As an artist you take such care when doing a recording — that you have your own sound engineer, that the mics are hung in the right spots. The sound is a part of you, you want your voice replicated in a way that really represents what you have worked on for an entire life.”

The audience expressed its approval of her stance, she said, and “erupted in long, powerful applause.”

As to complaints that such rules of etiquette could keep young people from embracing classical concerts, she noted that some pop musicians were also growing concerned by audiences who seem more interested in filming concerts than in experiencing them.

“The beauty of such an event, a pop concert as well as a classical concert,” she said, “is really being there, taking it in, having your own personal, really private memory of it.”

Mr. Henry, who sings virtually nonstop in “The Wrong Man,” which is now in previews at New York’s MCC Theater, said he had mixed feelings about the episode in which he seized a patron’s phone.

But his experience has a happy ending. Mr. Henry emerged from the theater to find the offending attendee waiting to apologize to him. The two had a friendly conversation and continue to communicate.

“For him to apologize was so disarming,” Mr. Henry said. “We have talked about connection and empathy and forgiveness, and that is the big take away — yes, we don’t want phones in the theater, but I never want to come across as ‘Not in this space,’ because theater is a space where everyone, even people who don’t know all the rules, can come and share an experience.”

Re: Filming the Show: Pardon the Intrusion? Or Punish It?

One thing the article doesn't mention is that halls have strict rules about recording concerts that are rigorously enforced by union contract. When I would rent Carnegie Hall for my presentations, they would offer me a contract to record the concert if I wanted to. Said contract would specify that no copies of the recording could be made (even for the singers), and that I would retain the only copy. Once a singer offered me money in front of the recording engineer, who then informed me at the end of the concert that her portion of the evening had not been recorded "by mistake."

Recording anyone without their permission is forbidden by law in New York State. Also, it's infuriating to the artist being recorded, robbing them of artistic rights to their performance.
Top

Re: Filming the Show: Pardon the Intrusion? Or Punish It?

It's also extremely off putting to those distracted by the light from the phone.
A year or two ago, at the end of the first work at a concert, I asked a woman in front of me to put her phone away because it was distracting - she was texting - and at interval half a dozen people thanked me. I was not hostile, I just pointed out politely that it was distracting. A couple of grunts of agreement from around her helped persuade her.
I know I'm old, but courtesy does not belong to any single generation.
Top
Post Reply
3 posts • Page 1 of 1