Tomorrow we head into the city for 2 operas at the Met-hope we will not be adversely effected. Where's the infrastructure improvements we need so badly! Len 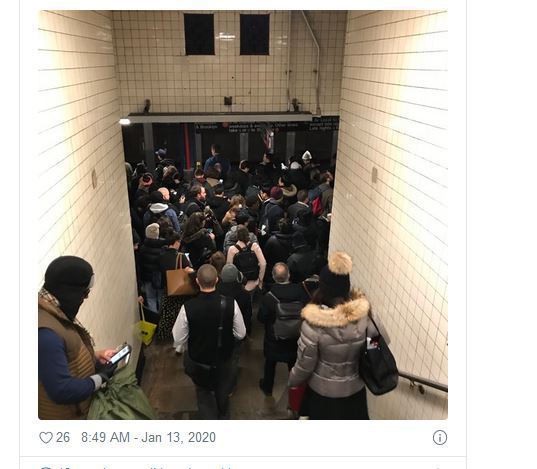 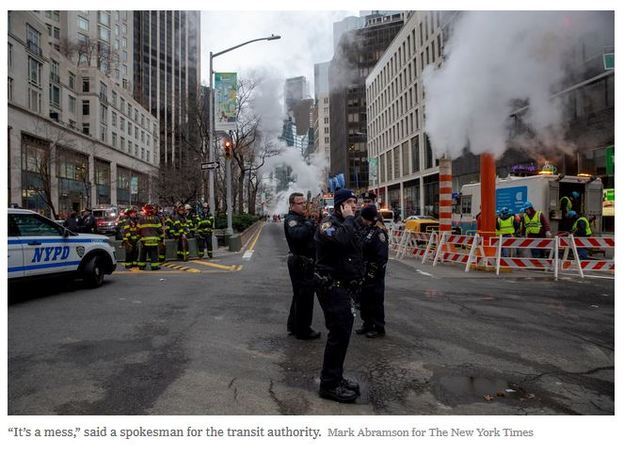 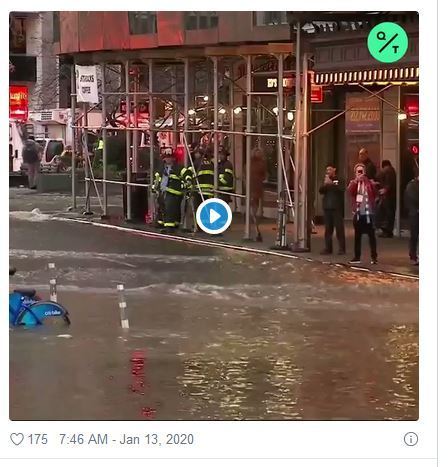 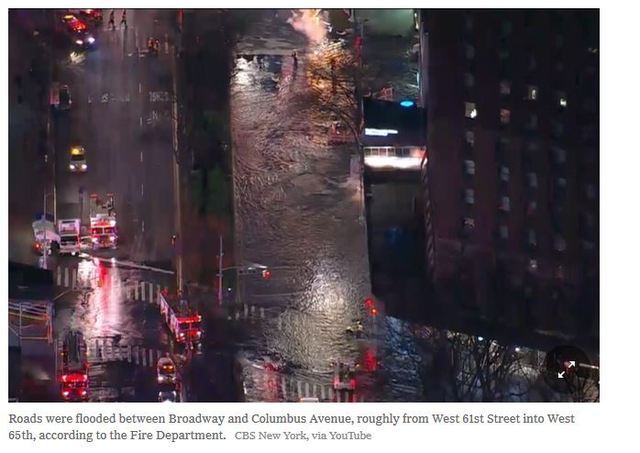 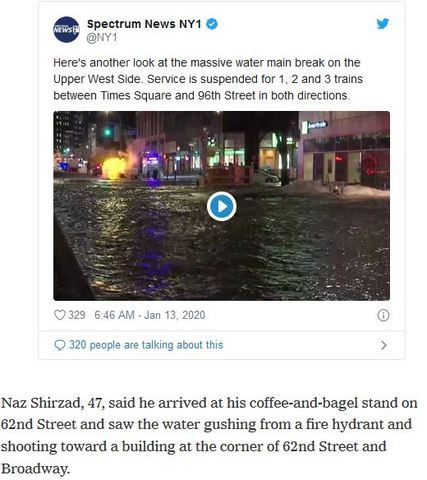 Subway service on the No. 1, 2 and 3 lines has resumed in time for the evening commute after water flooded the area around Lincoln Center.

By Michael Gold and Mihir Zaveri

A water main break early on Monday morning shut down several New York City subway lines and flooded a swath of the Upper West Side around Lincoln Center just before the start of the morning rush hour.

The incident disrupted subway service on the No. 1, 2 and 3 lines, with no trains running between 42nd Street and 96th Street, according to the Metropolitan Transportation Authority. Several bus routes were also detoured.

Just before 4 p.m., service on all three lines was running again, with delays, the transit authority said.

The break occurred around 62nd Street and Broadway at around 5 a.m., officials said. Flooded roads spanned Broadway and Columbus Avenue, roughly from West 61st Street into West 65th, according to officials.

The cause of the break remained unknown. Officials said it would not be determined until workers could expose the inside of the pipe to examine it.

Throughout the morning, commuters were confronted with a lake of brown water lapping at the steps of Lincoln Center and fire trucks gathered nearby. Video on social media showed gushing water, as deep as a foot in some places.

Naz Shirzad, 47, said he arrived at his coffee-and-bagel stand on 62nd Street and saw the water gushing from a fire hydrant and shooting toward a building at the corner of 62nd Street and Broadway.

A spokesman for the Department of Environmental Protection, Ted Timbers, said that its crews had isolated the source of the leak and shut off the water by 8 a.m. As of 11 a.m., much of the floodwaters on the street level had been cleared.

The city’s subway system is permeable by nature: As it weaves underneath the streets, it is constantly surrounded by groundwater.

The transit authority has the capacity to siphon off up to 1.5 inches of rain per hour, but a massive flow can overwhelm the system.

By the time the water was shut off, there were already 500,000 gallons in the subway system, said Frank Jezycki, the executive vice president and chief operating officer of the city’s subway system.

Tim Minton, a spokesman for the transit authority, said the water in the affected subway stations on Monday rose to the level of the rail — far lower than the platform level — when service was disrupted starting around 5 a.m.

“It’s a mess,” Mr. Minton said. “We’ve lost a main artery of the subway system in rush hour, and until the Department of Environmental Protection can do the work that they need to do, we’re essentially beholden to the fact that we have water on the tracks.”

At around 10 a.m. on Monday, dozens of workers were underground at the 66th Street-Lincoln Center station working to clear the water. They used portable pumps to remove some of the water and hoses to siphon it up to the street.


Workers were also opening up machines and signaling equipment along the track to assess them for damage and ensure they were functioning properly.

The authority warned of “extensive delays” on the No. 1, 2, and 3 lines as the evening rush hour began.

Other parts of the subway faced their own mishaps. At around 5:30 p.m., four subway lines stopped running service from Manhattan to Queens for about 40 minutes because of a problem with a rail switch.

In a separate incident, some F and M trains were delayed after a train’s brakes were activated at 34th Street.

New York City has about 6,800 miles of water mains that carry more than a billion gallons of water to residents and businesses every day. In the past five fiscal years, the city recorded an average of 474 breaks a year, according to the Mayor’s Management Report, which assesses city services.

The city already has one of the oldest networks of underground infrastructure in the world, and aging pipes and utilities are particularly susceptible to leaks, breaks and cracks.

Wintry conditions typically make problems worse, particularly with “freeze-thaw” cycles during which moisture in the ground expands and then contracts, putting pressure on the pipes, said Mr. Timbers.


Extreme weather fluctuations such as the one that occurred over the weekend, when temperatures soared above 60 degrees on Friday only to retreat toward the 30s on Monday, also posed a challenge.

“It used to be that it would get cold and it would stay cold in the winter, and you’d just have the early winter and late winter weather fluctuations,” Mr. Timbers said. “Now we’re seeing many more fluctuations during the winter season.”

The Fire Department said that there were no reports of injuries, but some people reported that the water was leaking into basements.

The break forced street traffic to reroute away from the flooding. Cars inched along streets that were already typically congested, and commuters waited three deep at bus stops, asking bus drivers to clarify what route they were taking.

At the busy Times Square transit hub, the platforms were so crowded that lines stretched up staircases and onto the concourse.

Outside the Port Authority bus terminal, a bus supervisor at the M104 layover stop told a crowd of commuters that the break had put service 20 to 30 minutes behind schedule.

As a chorus of voices pelted him with questions, one woman’s broke through. “You’re kidding,” she said.

The supervisor replied: “I can’t make this up.”

As subway passengers sought alternate routes, several stations were also mobbed. The stairways at the 96th Street station on the B and C lines were packed with commuters seeking an alternate path to parts of the Upper West Side.

Ricardo Rose, 31, who lives in West Harlem and usually takes the 2 or the 3 train, said he was forced to exit at 96th Street.

Mr. Rose, a personal trainer, said he ran several blocks to the nearest B and C subway station so he could try and make a 10 a.m. meeting on the city’s east side.

“I’m running there right now,” Mr. Rose said as the doors of his C train shut. “I just got to sprint everywhere now.”

The Department of Environmental Protection said it was working with the Fire Department to determine whether any buildings were damaged, and how badly.

Water service had been disrupted to at least two buildings on West 62nd Street, but was restored by the afternoon, Mr. Timbers said.

Dale Elliott, 52, was visiting the city from Virginia and staying at the West Side Y.M.C.A. on 63rd Street. He said that many people used the sinks and showers in the building, but on Monday, they were not permitted.

“They told us we can’t take a shower,” he said.

You might have to learn to walk on water, Len. Been done before, apparently.

Brian thanks-tonight there was no problem but we weren't at lincoln center-Sue shopped at macys and I went to the central park zoo to see the exotic birds-we had french food at chez napoleon on 50th st and 9th ave-we didn't get close to lincoln center-tomorrow we'll be seeing porgy-hope there are no problems. Len
Top

Barney walking on water-you must mean trump-he thinks he's the chosen one! Len

Barney walking on water-you must mean trump-he thinks he's the chosen one! Len

No Len, that's far too humble for Trump. He thinks he's the one who does the choosing.
Top

Barney good point-tonight we have our Porgy and Bess-wonder what trump would think of that opera. Regards, Len
Top
Post Reply
7 posts • Page 1 of 1