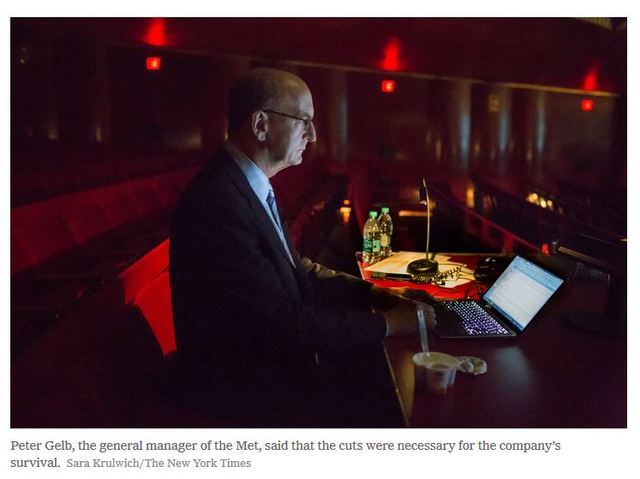 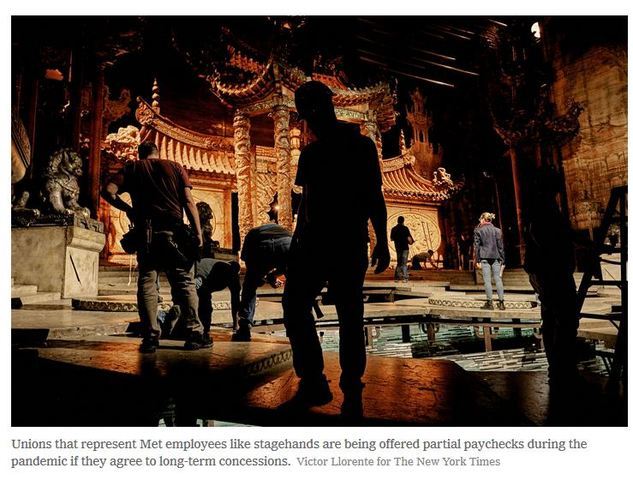 The Met is offering many employees their first paycheck in months if their unions agree to long-term cuts.

The Metropolitan Opera has offered to start paying many employees who have been furloughed without pay since April up to $1,500 a week in exchange for new union contracts that include long-term pay cuts, the company’s general manager said in a meeting with staff on Friday.

Two months after announcing that the curtains would not part again until fall 2021, the Met’s general manager, Peter Gelb, said in a video call with Met employees that the company was willing to cut a deal with unions that would mean its members would receive partial paychecks for the duration of the pandemic. The catch: Employees would have to agree to a 30 percent cut in pay, half of which would be restored once the Met’s box office returned to pre-pandemic levels.

Mr. Gelb predicted that even after the pandemic subsided, ticket sales would be depressed for several years, citing a recent study that said New York City was not likely to reach its pre-pandemic tourism levels until 2025. Another factor that he cited is that the Met’s audience leans older, meaning they may be more reluctant to return to the 3,800-seat opera house.

“For the Met to get back on its feet, we’re all going to have to make financial concessions and sacrifices,” Mr. Gelb said in the Zoom call, which was viewed live by more than 500 people.


Roughly 1,000 full-time Met employees, including its orchestra and chorus, have been furloughed without pay since April. For many, it will be tempting to start receiving paychecks again, which would amount to 70 percent of their base salaries and would be capped at $1,500 a week.


But the unions would have to agree to new contracts that would reduce their workers’ take-home pay, which is often significantly more than their base salaries, by 30 percent, mostly through a series of changes to work rules.

The unions that work with the Met are against making such significant concessions that could affect workers long after the most severe impacts of the pandemic subside, and have accused management of taking advantage of the outbreak in order to get them to agree to cost-cutting measures.

“The Met’s opportunistic approach seeks to permanently gut our contract way beyond the end of this crisis,” said Len Egert, the executive director of the American Guild of Musical Artists, which represents the company’s choristers, stage directors, and dancers, in a statement on Friday.

Mr. Egert said that his union members “have no interest in selling out their future for short-term relief.”

The pandemic has severely strained arts institutions across the country, and even the Met, the nation’s largest performing arts organization, has not been spared. The Met’s finances were perilous even before the virus struck: its annual budget is $300 million a year, and it earns less than a third of that through box-office sales, leaving it heavily reliant on donors. The company has lost more than $150 million because of the shutdown, and its announcement in September that it was canceling its entire 2020-21 season signaled that the losses were only just beginning.

A Met spokeswoman declined to say what kind of changes to work rules were under discussion because the company is in the middle of union negotiations.

Part of union opposition to the requested concessions is that half of the salary cuts will only be restored when the box office recovers, which could easily take years.

The Met’s box office was projected to make $88 million in the 2019-20 season before it was cut short by the pandemic, Mr. Gelb said, and the company projects that its next season starting in the fall of 2021 will only take in about $49 million. Under his proposal, even when the box-office sales recover, employees would still be paid 15 percent less than they were before the pandemic struck.

I've been saying all along that Gelb would bury the Met. The pandemic is just an excuse to do what he intended to all along: drastically cut the cost and turn our opera house into a cross between a Broadway theater and an experimental music venue a la BAM or Armory. I don't think the Met can survive.
Top

While nothing can compare to live performances, those of us who love great music-making can still hear the best that we have in our recording collections. For that, I am most appreciative even though it is not the same as attending live performances. It looks bleak for young artists in universities and colleges who want to be musicians and live performers. What future can they have whether here, Europe, or anywhere else? This, I worry about.
I went by a large AMC theater house with many individual screens ... the place has been vacant for months. Will it all open again? Hopefully so, but when, after they've gone bankrupt? In the era in which we live, however, we can still watch the great old/newer movies on TV or DVD, which replaces even going to the big screen. For that, I am also thankful. In America, indeed, we have much for which to be thankful! •
Lance G. Hill
Editor-in-Chief
______________________________________________________

Notice that Gelb waited until a vaccine was announced to make his offer.

Frankly, I think, in spite of the unions' initial objections, it's a good deal for both the MET and its employees. The pandemic relief program from Washington is due to end very soon, and the MET's musicians will need income to continue to live here while waiting to work again. Paying them a salary will keep them loyal to the MET in the meantime. By the same token, Gelb (who has taken pay cuts in the past) is right that attendance at the MET for the near future will probably be lower than previously projected.

MHO is that the unions will settle rather quickly. Remember that, for example, chorus members cost the MET well over $200,000/yr each in salary, plus $100,000 in benefits. That's unsustainable in today's economy. If conditions improve more rapidly than projected, the unions can always renegotiate.
Top
Post Reply
4 posts • Page 1 of 1

Users browsing this forum: No registered users and 81 guests