We saw it at Bard and enjoyed it alot. Regards, Len

In the early 20th century, Smyth was probably the most famous female composer of her generation, but her music fell out of the repertoire. Glyndebourne Festival Opera is bringing back her 1906 maritime opera. 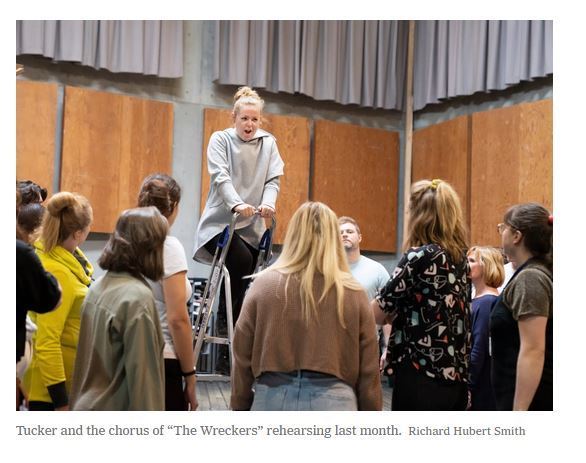 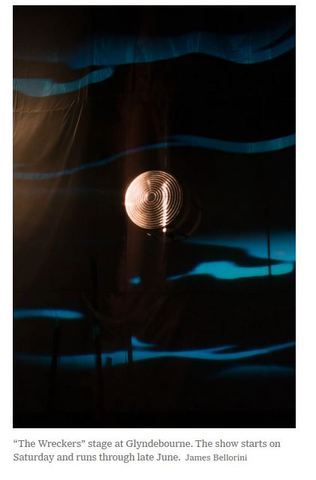 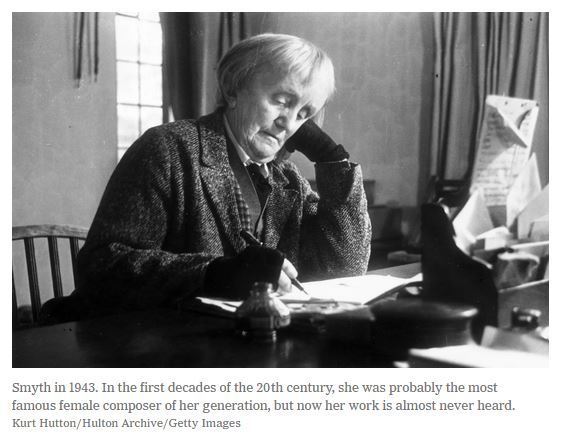 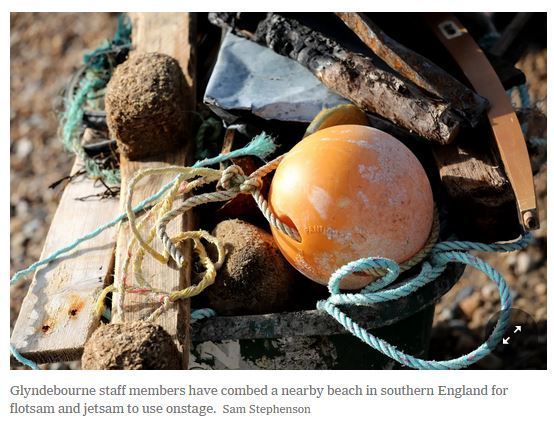 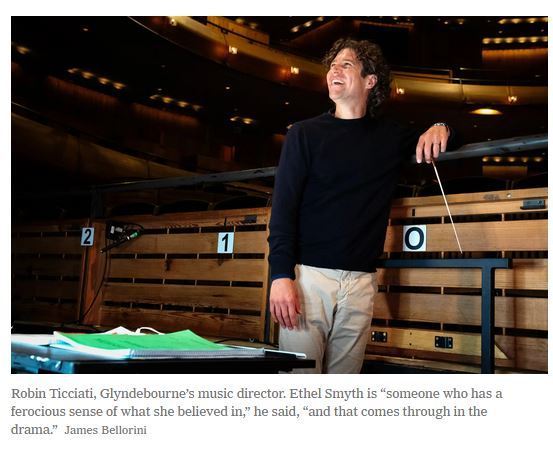 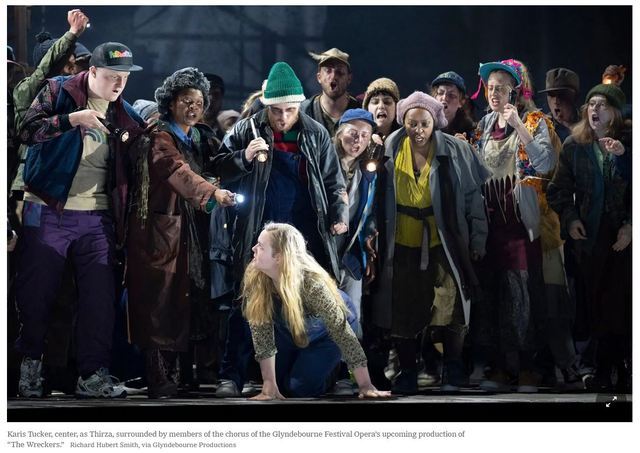 LEWES, England — Late last fall, there was an unusual sight on a beach in southern England: a team of staff members from Glyndebourne Festival Opera combing the shingle for flotsam and jetsam, then carting it off in wheelbarrows for use onstage.

It is an unusually true-to-life approach for one of Glyndebourne’s productions this season — “The Wreckers,” by the British composer Ethel Smyth. The action is set among an impoverished seaside community in 18th-century England, whose inhabitants make their living from scavenging the wreckage of ships they have driven ashore (as many did, historically).


Glyndebourne is lavishing a lot of effort on “The Wreckers,” which, despite premiering in 1906, has been staged professionally only a handful of times. For nearly three years, Glyndebourne’s archivist has been combing through documents and old musical scores to assemble a new performing edition that matches the composer’s intentions as closely as possible. A production of this news restored version, which runs Saturday through June 24, will be sung in French, as the original was.

A chorus of over 50, a team of dancers and a 75-piece orchestra have been hired to give the production some oomph. And, as a mark of respect, “The Wreckers” has been placed in pole position as the summer festival’s opening show, displacing the operatic big-hitters that generally take up this spot.

“We’re trying to do Ethel justice,” Robin Ticciati, Glyndebourne’s music director, said in an interview. “Quite honestly, it’s about time someone did.”


In the first decades of the 20th century, Smyth was probably the most famous female composer of her generation, but now her work is almost never heard. She was championed by Mahler and by the conductor Thomas Beecham, who proclaimed “The Wreckers” a masterpiece and put it on at the Royal Opera House in London. In 1903, Smyth became the first woman to have a work staged at the Metropolitan Opera (and, astonishingly, remained the only one until 2016).

Yet after her death in 1944, Smyth’s music gradually faded from the repertoire. There were fewer and fewer outings for her symphonies, choral works or chamber pieces, and even fewer stagings of her six operas. Only a handful of recordings exist: The sole version of “The Wreckers” currently available is from a 1994 live performance.

Patient advocacy by the American conductor Leon Botstein yielded a production of “The Wreckers” at the Bard SummerScape Festival in 2015 at Bard College in New York, and there have been scattered performances of Smyth’s other works since. In November, the Houston Opera will also put on “The Wreckers” in its own new staging.

Smyth might have arched an eyebrow: near nothing for decades, then two new shows at once.

Leah Broad, a music historian at Oxford University who is writing a group biography that includes Smyth, said “gender prejudice” was one of the chief reasons Smyth’s music was so little performed.

“There are other issues, but that’s a lot to do with it,” Broad said. “She’s a really significant historical composer.”


Smyth also has one of the great life stories in musical history. Brought up in a military household, she was initially forbidden from studying music by her father, but she eventually won out and attended the Leipzig Conservatory in Germany in 1887.

Although she dropped out after a year, unimpressed by the teaching, while she was there she met Dvorak, Grieg and Tchaikovsky — who wrote in his diary that Smyth was “one of the few women composers whom one can seriously consider to be achieving something valuable.”

A formidable networker, Symth later befriended many well-known people, including George Bernard Shaw and Empress Eugenie of France, and she had much-gossiped-about romantic affairs with both men and women.

Smyth got many of her works performed and won a degree of acceptance, but always battled the assumption that what she was doing was essentially second-rate. Writing in The Times of London in 1893, a critic praised her “virile” compositions and commended “the entire absence of the qualities that are usually associated with feminine productions.”

More humiliatingly, Smyth was often treated as the butt of a joke — as famous for her forceful personality, many dogs and penchant for wearing men’s suits as anything she had written. Virginia Woolf, who carried on an intimate correspondence with the much-older Smyth, nonetheless complained in her diary that becoming the subject of Smyth’s affections was like being “caught by a giant crab.”

In 1910, Smyth became involved with the women’s suffrage movement. Two years later, she was sent to Holloway prison in London for several months after throwing a rock through the window of a government office. When Beecham visited her in jail, he later recalled, he was astonished to see Smyth conducting an exercise-yard performance of her rousing “March of the Women” from a cell window “in almost Bacchic frenzy, with a toothbrush.”

Like much of Smyth’s music, “The Wreckers” is an intense experience. Inspired by visits the composer made to remote coastal villages in Cornwall, in southwest England, it centers on a local preacher’s wife, Thirza, who is torn between her sense of duty to her puritanical husband and her love for a kindhearted fisherman.

Not incidentally, Smyth was herself involved in a romantic triangle with the opera’s librettist, the married American poet Henry Brewster, and his wife, Julia. “There’s such passion in the love music,” said Karis Tucker, who sings Thirza at Glyndebourne. “She knew what she was writing about.”

Ticciati said the score had both power and remarkable range, sounding “sometimes like Brahms, then Mendelssohn, then French exoticism, even late Debussy.” He added: “You think: ‘What is this?’ And then you realize that this is Ethel Smyth; this is what she sounds like.”

As well as conjuring a fogbound maritime atmosphere, infused with snatches of folk song and sea shanties, Smyth seems to find particular relish in crowd scenes, as her supposedly God-fearing villagers prepare to lynch shipwrecked sailors before turning on each other.


There’s more than a hint of “The Crucible” about “The Wreckers,” and as Broad, the music historian, pointed out, the pre-echoes of another seafaring work, Benjamin Britten’s “Peter Grimes” (1945), are even stronger. “Britten owned a score of ‘The Wreckers’; it’s right there in his library,” Broad said. “He was never polite about Ethel Smyth’s music, but he was clearly influenced by it.”

Finally, more of us will get the opportunity to make up our own minds. In addition to the Houston production, Glyndebourne will take a semistaged version of its “Wreckers” to the BBC Proms festival this July. The Proms is making Smyth a major focus and spotlighting other works of hers, including Mass in D and Concerto for Violin and Horn.

“She’s so overdue her moment,” Broad said. “When you hear her, it’s like a gap in music suddenly gets filled.”

Fearlessly inventive, sensuous and sometimes shocking, “The Wreckers” is a fine testament to the woman who created it, Ticciati said. “She’s someone who has a ferocious sense of what she believed in, and that comes through in the drama,” he argued.

“I don’t want to say Ethel was larger than life,” Ticciati added, “because I think that was her life.”

The Wreckers
May 21 through June 24 at the Glyndebourne Festival in Lewes, England; glyndebourne.com. 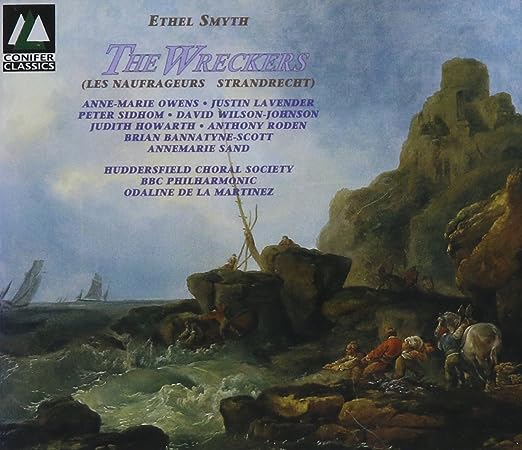 Maybe there will be a DVD of the production? Above is the only recording I could find in print. Interestingly, I could only find The Prison on Spotify, her other recorded opera.
Top

Brian youtube has the one we saw-we liked it alot-it's free and with captions! Regards, Len

Brian youtube has the one we saw-we liked it alot-it's free and with captions! Regards, Len