What is your take on this compatriot of Hovhaness*?
I possess plenty of Prokofiev and Shostakovich, but have no K because the weasels, stoats, mustelids, rodents, ferrets and martens only play GAYANE, SPARTACUS and the Violin Concerto--all good works, but I'm more than a little tired of them.

*How did H take the emancipation of his homeland? Did he write anything to celebrate the occasion?
Let every thing that has breath praise the Lord! Alleluya!
Top

"Compatriot of Hovhaness"? That's a novel perspective, considering that Khatchaturian was born in Tiflis (Georgia, not Armenia) and Hovhaness was born in Somerville, Massachussetts. Anyway, I don't think much of Khatchaturian's music. The violin concerto is showy and effective but for me it's pretty empty; the same with the Sabre Dance from "Gayane," the only music I know from that score; and "Spartacus" gives me a kind of aural indigestion. If he wrote any better music than this, I haven't heard it.

Hovhaness's homeland was emancipated in 1783, when the British army surrendered to George Washington after the successful siege of Yorktown. He composed his Symphony No. 65 ("Artsakh"), op. 427, in 1991; the title refers to a province of Armenia. What if anything this has to do with Armenia's independence from Soviet Russia in 1990, I don't know.
John Francis
Top

His Piano Concerto is one of the most, well, badass pieces I've heard. Love it.

Playing this was my introduction to Khachaturian back in high school.

IcedNote wrote:His Piano Concerto is one of the most, well, badass pieces I've heard. Love it.

Oh yes, I've heard that too, in the William Kapell recording, but repressed the memory.

His music is a lot of fun. Great energy.
Top

John F wrote:Oh yes, I've heard that too, in the William Kapell recording, but repressed the memory.

Khachaturian's piano concerto is, by tradition, always taken too slowly at the tempo primo, which is marked Allegro ma non troppo e maestoso. Even the most famous pianists take Kappell's tempo, which is too slow, emphasizing the maestoso and forgetting about the allegro part of the equation, making the music deadly dull. The only recording I have that's correct IMHO is an obscure Supraphon production (issued on Parliament LPs in this country and later on a Urania CD in 1989) with Antonin Jemelik as pianist and the Czech Philharmonic led by Alois Klima. Absolutely authoritative, this recording leaves others in the dust. There are three used copies on Amazon, reasonably starting at $14.99. 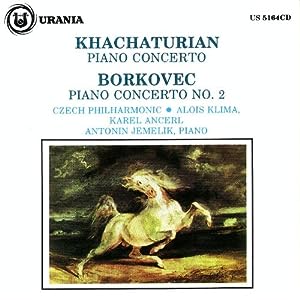 Khachaturian also wrote an excellent Second Symphony, recording it in the West with the Vienna Philharmonic (on London) and about a decade later in Russia. Believe it or not, the CD available on London has more distortion than the Russian recording, which is really superb, both led by the composer himself. 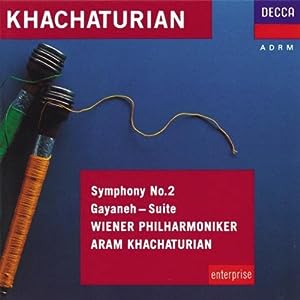 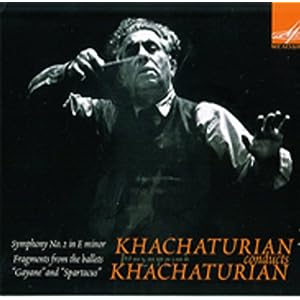 Finally, Spartacus is an excellent ballet, second only to Prokofiev's Romeo & Juliet. The authoritative conductor for this score would be Alex Zhuriatis on this DVD: 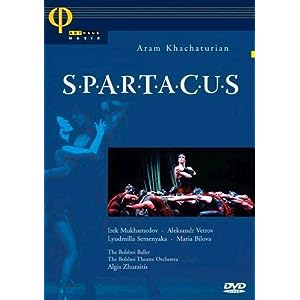 Just listen to his records, the guy knows how to compose...
Sent via Twitter by @chalkperson
Top

johnQpublic wrote:His Symphony #3 is big, bold and brassy (15!!.. count 'em...15 extra trumpets!!) But only get the Stokowski/CSO recording.

I don't think the choice of recording makes much of a difference. Nobody chooses a dentist by the brand of drill they use.

Sure, the symphony (if that's the right word - a matter of debate in itself) has 15 trumpets. And an organ. But as they all do much the same thing for a very long time, it really doesn't matter after the first half-minute. As a music-lover, you'd get much better value, and infinitely more fun, if you bought a kazoo instead.
Top

Well, Burbage, I'm not saying it's a great work of art, but it is one of his more exciting pieces; and to say that a specific recording can't make this (or more broadly) any other piece come off better is just wrong. In the case of the 3rd, the ASV recording which I also own does not do the piece justice. Stoki's recording sells the piece (if you're in the market).

Yes! It's also scored for optional theramin in the second movement, the only repertoire piece I know that uses that instrument.

Frankly, it works just fine without, but it's a fun idea.
Top

Yes! It's also scored for optional theramin in the second movement, the only repertoire piece I know that uses that instrument.

That's a flexatone, isn't it? A percussion instrument, not electronic. It caught on in Russia - I've seen it used in pieces by Schnittke and Gubaidulina. The closest thing to a theramin in orchestral music is probably the ondes martenot.
John Francis
Top

Well, let's add to the confusion, by my stating that Khachaturian scored the second movement for a "musical saw" and since there aren't a lot of those players around it has been substituted by other instruments like flexatone, theramin, etc

The original score calls explicitely for a "Flessatone" (the nomenclature of instruments is in Italian) which should have a "whistling" and not a "ringing" tone ( note by the composer).

No musical saws, Theremins or whatsoever are required or asked for.

An invention for a flexatone occurs in the British Patent Records of 1922 and 1923. In 1924 the 'Flex-a-tone' was patented in the USA by the Playatone Company of New York. (Wiki)

The theremin (/ˈθɛrəmɪn/[1]), originally known as the ætherphone/etherphone, thereminophone[2] or termenvox/thereminvox is an early electronic musical instrument controlled without discernible physical contact from the player. It is named after its Russian inventor, Professor Léon Theremin, who patented the device in 1928. The controlling section usually consists of two metal antennas which sense the position of the player's hands and control oscillators for frequency with one hand, and amplitude (volume) with the other, so it can be played without being touched. The electric signals from the theremin are amplified and sent to a loudspeaker.

The theremin is associated with a very eerie sound, which has led to its use in movie soundtracks such as Miklós Rózsa's for Spellbound and The Lost Weekend and Bernard Herrmann's for The Day the Earth Stood Still and as the theme tune for the ITV drama Midsomer Murders. Theremins are also used in concert music (especially avant-garde and 20th- and 21st-century new music) and in popular music genres such as rock. Psychedelic rock bands in particular, such as Hawkwind, have often used the theremin in their work.

Having read all your responses, I'm afraid that your consensus is that Khachaturian is not to be regarded as on the same stature as Gospodin Sergei and Gospodin Dmitri.
Let every thing that has breath praise the Lord! Alleluya!
Top

Eventually all that will be remembered of him will be his Sabre Dance--a true one tune pony.
Let every thing that has breath praise the Lord! Alleluya!
Top
Post Reply
19 posts • Page 1 of 1

Users browsing this forum: No registered users and 52 guests