A magnificently shocking CD from Lisitsa!

A magnificently shocking CD from Lisitsa! 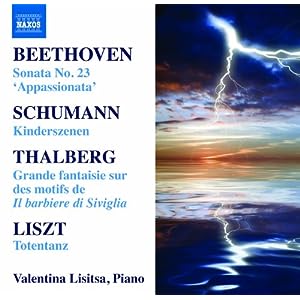 I was one of the lucky ones. I had the occasion to prepare Ukrainian pianist Valentina Lisitsa's piano on two occasions (four concerts) over the years. She was a joy to work with, knew the piano backwards and forwards, and even sideways. She plays the piano with intense perfection. Some may well remember her Audiofon CDs, which are now exceedingly hard to come by. I managed to get a number of them. Most of the Audiofons were made in one take.

Having had some correspondence within the last year-and-a-half or so, it was my understanding from her that all the Rachmaninoff piano concertos and Paganini Rhapsody were coming out on Naxos as well as the Beethoven 32. So far, nothing has come forth in that regard, though Lisitsa did record a trumpet recital for Naxos as well as a solo piano CD, which is what this post is all about.

In a word, it is astounding. Here's the program:

I've lost count on the number of Appassionatas I have on discs. Right from the outset, I have to say that this one is one of the most riveting I have heard while simultaneously being highly individual in its concept. It was so unique in its musical concept that I had to hearit immediately once again.

Fact is, this is a difficult Naxos disc to find. Having been recorded in 2008, I have waited for a long time to finally secure this disc and a HOT one it is! It is also priced higher than the usual Naxos CDs, even from the American distributor. (Lisitsa's new all-Chopin disc and DVD, apparently on her own label, is also something to look into if you're following the Lisitsa career.) The Schumann Kinderszenen immediately caught the attention of the Mrs. who has often played the work and was wonderfully entranced by Lisitsa's playing. For me, both the Thalberg Grand Fantasy and the Liszt Totentanz are winners from the word go, like everything on this recording.

The piano has been lovingly prepared by one of the greats in the piano technician business, Gerd Finkelstein, whose name appears on a number of labels, including Hyperion, is a master. He must be one busy fellow among artists.

The cleanliness of the Lisitsa technique is flawless and when combined with the Lisitsa musicality and sound, we have something very special. This is one pianist you will want to continue to keep your eye (ears) on. She is now an apparent exclusive Decca artist. Announcements have been made about Decca's MP3 versions of the four Rachmaninoff concertos and the Paganini Rhapsody performed by Lisitsa ... no physical CDs, at least at this moment. I hope that changes because I'm not into MP3s.

These two are even harder to find, and when they are available, they are obscenely expensive ($150-200 ea): 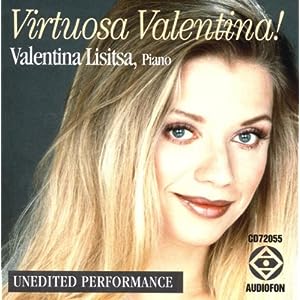 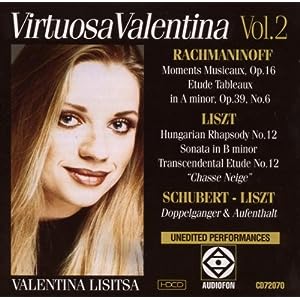 Guitarist wrote:These two are even harder to find, and when they are available, they are obscenely expensive ($150-200 ea):

I can help out folks if they want to hear that one. Just message me.
George
Top

I think she's also Hilary Hahn's partner on her recent Ives sonata disc and there's a CD/DVD of her live at the Royal Albert Hall that is fairly widely available.

Just ordered it from Amazon.

When you rave like this, I feel compelled to respond.

Will let you know !
Top

Here in the UK, Naxos seems to be re-releasing its Lisitsa disc at the end of this month, at its standard price. There have presumably been some contractual wrangles over it, which may account for its extraordinarily patchy availability in the past. (It really is as good as everyone says, by the way.)
In other Lisitsa news, MP3s of her Rachmaninov 2 and 3, and the Rhapsody, have been available since before Christmas. I don't really do MP3s either, but they're priced so cheaply that I thought it was worth downloading them as a taster for the full CD release, which is supposed to be in March. On a first hearing, they are very impressive: super-confident, technically assured piano, occasionally verging on the over-heated -- everything is very fast, perhaps too fast. The really pleasant surprise is the splendid orchestral sound and playing; of course, this is the LSO, but it was recorded very quickly and with a junior conductor. Even at the reduced quality of MP3 sound, instrumental detail comes across better than I've heard it before.
One question: her Chopin recital, mentioned above, seems to be completely unavailable here. Does anyone know anything about it? It's not a Decca or Naxos release, as far as I can see.
Top

arnolj10 wrote: {snipped} One question: her Chopin recital, mentioned above, seems to be completely unavailable here. Does anyone know anything about it? It's not a Decca or Naxos release, as far as I can see.

I feel lucky that I was able to obtain a copy of this Lisitsa all-Chopin disc. If ever a CD was released without paying much attention to the label, it is this one. Actually, this is a two-piece set: 1 DVD [83'] and 1 CD [56']. The "CD differs slightly from the main DVD disc and contains some additional pieces that are not included on the DVD." Quoted from the CD/DVD cardboard overwrap. Back to the label of this production: it appears nowhere on discs, front cover insert (no booklet!) or card inlay. Very strange. I have seen it advertised as "Valal Productions." (I guess this would indicate the first three letters of VALentina's name and the first two letters of her husband's name, ALexander.) 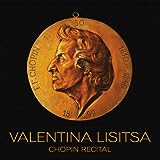