Ronald Brautigam is currently recording the complete Beethoven music for solo piano on the Swedish BIS label. So far, 12 CDs with the complete sonatas, including the early "Kurfursten" sonatas and the sonatinas, as well as the bagatelles and several sets of variations have been issued, with five more volumes coming.

The reviews have been almost entirely positive, even enthusiastic. I myself am very much taken with them.

thanks, listened to some on Youtube and that is just what I was looking for
Top

Arthur Shoonderwoerd made the most period of all HIP recordings of the piano concertos, not for everybody but absolutely fascinating.
Top

Ronald Brautigam appears in a TV series, "Piano Notes" of about 10 minutes each 'episode' - when he plays sections from the works of Scarlatti and Beethoven right through to Chopin and Schumann on a fortepiano. I love the sound and clarity that is achieved hearing these works on a fortepiano, but I would never be without the performances on a modern concert grand. Both approaches are necessary, I feel.

And Brautigam is such delicious and intense 'eye-candy'! See what I mean from the attached: 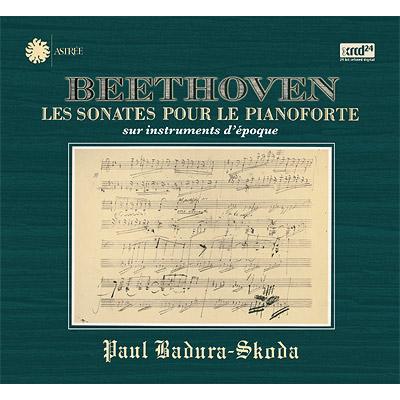 Todd wrote: Back in the mid-aughts, when I was buying new LvB cycles two and three at a time for months at a stretch, I picked up Paul Badura-Skoda's Gramola cycle, where he plays on a Bösendorfer, and it came at the right time, as I was slogging my way through Anton Kuerti's cycle. I much preferred PBS' approach in every regard and almost every sonata. I had known about Mr Badura-Skoda's HIP cycle for Astree, and though not a big fan of HIP keyboard playing, I figured I should look into it. Alas, the cycle was out of print. Now, though, it is a available in Japan, reissued by JVC using the XRCD24 process, for the low, low price of ¥27,000. While expensive, it is not the most I have paid for a cycle (both Ikuyo Nakamichi's and Akiyoshi Sako's cost more), and, well, I just had to have it.

It's an all Japanese affair. Only one page of the booklet is not in Japanese, so this makes me think it will not get wider distribution. And packaging for this deluxe set is, well, it's deluxe. There are four robust two disc packages, and one robust single disc package, along with a robust booklet, all snuggled inside a robust box. (It's almost identical to King International's issue of Wilhelm Kempff's 1961 cycle.) The discs themselves, emblazoned with not one, but five logos for labels and technologies, are stiffer than normal and seem to be slightly thicker than normal. I assume this has to do with the vaunted XRCD24 technology the discs use. This technology supposedly offers superior sound when compared to normal CDs, though that strikes me as impossible given that it's red book. That written, part of the XRCD and XRCD24 process, as I understand it, is that the recordings are remastered. Since I have not heard the original Astree issues, I cannot say whether the current issue offers better sound, but I can report that it offers almost state of the art sound – which is impressive given that the cycle was recorded mostly in the 80s. Clarity matches the best recordings I've heard, timbre and tone strike me as very accurate, and dynamics are super swell. Maybe the sound can be just a smidge bright, but then, I often found myself listening at higher than normal levels, which I usually don't do with bright recordings. The sound is almost on par with the essentially perfect sound evident in Penelope Crawford's late LvB disc.

So is the playing. Prior to this cycle, my only complete LvB cycle on period instruments was Ronald Brautigam's. I'll just get straight to the point here: Badura-Skoda not only bests Brautigam, he stomps the Dutchman's guts out. He does this by not being a one-trick pony like Brautigam – FAST! – but rather, to continue with an animal metaphor, by being a world class dressage horse. PBS plays everything the way I like it. Fast movements are fast. Slow movements are slow – but not too slow. There's tonal variation aplenty. Dynamics are subtlety shaded, or not, depending on what the music calls for. The music flows, except when it shouldn't. It's aggressive where it should be, playful where it should be, deep and transcendent where it should be. PBS plays quiet when he should, and as loud as his instrument of choice will allow, or something close to it, when he should. This is one of those lovely sets where I can't really pinpoint this or that sonata as being really great and this or that sonata as being bad. Everything is uniformly excellent – or better. Think Friedrich Gulda's awesome Amadeo cycle, but on period instruments, and that's the kind of sustained excellence I'm talkin' 'bout. Okay, for those who need nitpicking, Op 28 is not as lyrical as it could be, but then, fortepianos don't generate the same tonal luxuriance that modern grands can, and maybe PBS pushes things a bit in Op 106, losing the last degree of precision and control, but that's something I can easily live with.

About those instruments, they sound pretty damn good. All of them offer more color, more dynamic range, more everything than I'm used to from fortepianos. No, they do not match a modern Steinway, or Stuart and Sons, or Bechstein, but they more than do the job. Perhaps one downside is their mechanical noise, exaggerated perhaps by the obviously very close miking, but here, if anything, it adds a little pizazz to the proceedings.

So, Paul Badura-Skoda's HIP cycle offers not just great HIP Beethoven, but great Beethoven, period. I like everything about it. Even if it does not join the ultra-elite (ie, my Top Ten), it does join the elite, nesting with the likes of Francois Frederic Guy, Claude Frank, and Claudio Arrau. August company, to be sure. Perhaps a shoot-out or two is needed, to see where PBS will land. A solid top ten finish is most certainly not out of the question.

My only complaint about the cycle is the extraneous noise, particularly some occasional low-frequency noise. Some of it is clearly the pedal mechanism of the instruments, but some of the other noise seems more distant and unrelated to the instruments – I assume something like a truck or train or HVAC is going in the background. It detracts but slightly. 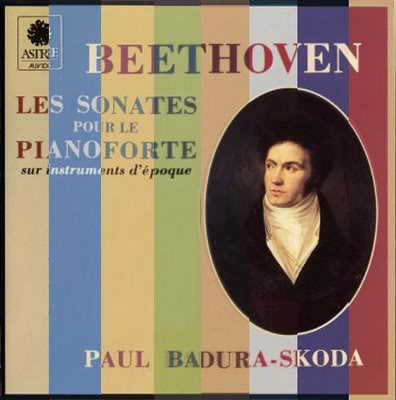 Info on the instruments in PBS's set:

Marginally off topic, but Stephen Isserlis and Robert Levin have just released the complete cello music with Levin on fortepiano.
Top

I am a great admirer of Ronald Brautigam, and have in fact, presented a radio broadcast in tribute to him. Also, as a concert piano technician, I don't particularly enjoy the sounds of most fortepianos (some are exceptional), though I hold a much greater appreciation for the harpsichord in comparison. I much prefer the modern-day piano, at least those made from around 1853 to the present. I have enjoyed the artists that play on them. In Brautigam's case, he also plays modern-day pianos. I can understand the concept of hearing the music as the composer heard it ... that is of great historical interest to many. One wonders how Bach, Beethoven, Mozart or any of the greats might have changed their "style" of composing if they had a superb concert grand at their fingertips (not that it would or might change at all).
Lance G. Hill
Editor-in-Chief
______________________________________________________

Yes, the period pianos are interesting, but I could not listen to them exclusively. However I generally don't listen to baroque music played on modern pianos
Top

<One wonders how Bach, Beethoven, Mozart or any of the greats might have changed their "style" of composing if they had a superb concert grand at their fingertips (not that it would or might change at all)>

They would have composed completely different to explore the possibilities of the Concert Grand, and no doubt in my mind, Mozart would have loved it, but sadly that never happened, and so, I think, to play him in a modern piano is rather like painting him watching TV....

But then, he might have enjoyed Downton Abbey and dear Martha playing his piano concertos...

josé echenique wrote:<One wonders how Bach, Beethoven, Mozart or any of the greats might have changed their "style" of composing if they had a superb concert grand at their fingertips (not that it would or might change at all)>

They would have composed completely different to explore the possibilities of the Concert Grand, and no doubt in my mind, Mozart would have loved it, but sadly that never happened, and so, I think, to play him in a modern piano is rather like painting him watching TV....

Yes, it's a pity we missed all those pieces that ranged from A0 to C8. Not just by Bach, Beethoven, and Mozart, but Schumann, Chopin, Brahms, Debussy, Rachmaninoff, Shostakovich, Ligeti.... And just think if they had had a Bösendorfer.

There's nothing remarkable about it. All one has to do is hit the right keys at the right time and the instrument plays itself.
-- Johann Sebastian Bach
Top

Lance wrote: I can understand the concept of hearing the music as the composer heard it ... that is of great historical interest to many.

No, it is of great musical interest, because the nature of the music is intimately related to the instrument it is composed for.


Lance wrote: One wonders how Bach...... might have changed "style" of composing if he had a superb concert grand at his fingertips

Thanks God, Bach hadn´t a Steinway to his disposal. Then we might possibly not have all the great masterpieces, he wrote for the harpsichord.
Top
Post Reply
12 posts • Page 1 of 1