Recently, I picked up a copy of EMI 57888, Orff's Carmina Burana with Sir Simon Rattle conducting the Berlin Philharmonic. The only reason I wanted this was the inclusion of the spectacular tenor Lawrence Brownlee, his part of which was not disappointing in the least - nor the other soloists for that matter. I must say that, technically, this is the worst recording of the work I have ever encountered from a pure sound point of view. The balances are strange. I usually set my volume control where most recordings give adequate sound. The lows in Rattle's recordings are too low, and suddenly the sound bursts explosively. I could find no area of volume control that would cover the entire recording effectively. While recognizing natural acoustics as the composer implied, I am fearful that the engineers did not do justice to the recording.

Some of the soloists sound as though in a hollow canyon. Baritone Christian Gerhaher's voice did not record to his advantage. Those of the superb soprano, Sally Matthews and tenor Lawrence Brownlee were recorded more naturally. Above all, the levels of the recording are bothersome, to say the least. The BPO, as you might expect, is quite outstanding.

I was first introduced to Carmina Burana through the Ormandy/Philadelphia Orchestra recording on Columbia/Sony and was on the edge of my seat the first time I heard the LP recording. Naturally, I have the CD counterpart, which is equally convincing.

These are the recordings I have of Carmina Burana:

I have the first two you mention and have enjoyed them several times. My favorite, though, is Giulini/Philharmonia/EMI.
Top

Unlikely as it might seem, I don't have any. None at all. It's not that I dislike Orff's music, I have recordings of four of his operas, but somehow this piece rings false to me and always has, from the first hearing.
John Francis
Top

When I was young .... this was one of my favourites.

To be honest, I don't listen to it anymore, with the odd exception of course, but I've always liked Herbert Kegel (once re-issued on Philips Silver Line Classics), Kurt Eichhorn (the (in)famous Ponnelle movie/DVD with Lucia Popp, John van Kesteren and Hermann Prey) and last bot not least Riccardo Chailly (RSO Berlin, Decca), despite a small castanets error in the 'Tempus est iocundum'.
Top

For me, this piece lives or dies by the opening numbers: "O Fortuna" and "Fortune plango vulnera". (Sort of like the Strauss Zarathustra?) I get by with Michael Tilson Thomas and the Cleveland Orchestra (Judith Blegen, sop; Kenneth Riegel, ten; Peter Binder, bar) on CBS Masterworks, MK33172. It's a piece I return to every now and then, when the mood strikes. Too, I've utilized this music for stage sound design, most notably in a production of a Frankenstein play that featured a masked Halloween ball, where it served well as the Act III curtain opener!

SONNET CLV wrote:For me, this piece lives or dies by the opening numbers: "O Fortuna" and "Fortune plango vulnera". (Sort of like the Strauss Zarathustra?) I get by with Michael Tilson Thomas and the Cleveland Orchestra (Judith Blegen, sop; Kenneth Riegel, ten; Peter Binder, bar) on CBS Masterworks, MK33172. It's a piece I return to every now and then, when the mood strikes. Too, I've utilized this music for stage sound design, most notably in a production of a Frankenstein play that featured a masked Halloween ball, where it served well as the Act III curtain opener!

Coincidence: that's my favorite recording of the piece as well, altho I admire Ormandy, who also recorded Catulli Carmina. Never issued on CD AFAIK, CC makes an excellent follow-up. Richard Kness, the MET tenor who won a Grammy for that recording, was on my panel of judges for two years.
Top

My seminal recording of this work was: 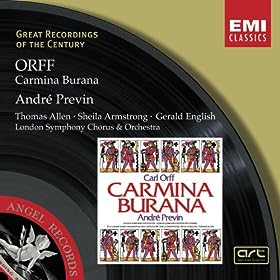 and it still rates very highly. However, I also acquired the Ormandy and like Lance, I tend to see this as the version I prefer above all others. There is a lot of support for the Jochum but it doesn't do it for me.
Top

The Ozawa/Boston Symphony recording with its slightly naughty cove has long been a critical favorite (avoid Seiji's Philips remake). It's the only one in my collection since I don't like the work. The best thing about Carmina Burana is the parodies of the opening chorus -- "Gopher Tuna," "Oh for Tuna," etc. You can find them on YouTube. 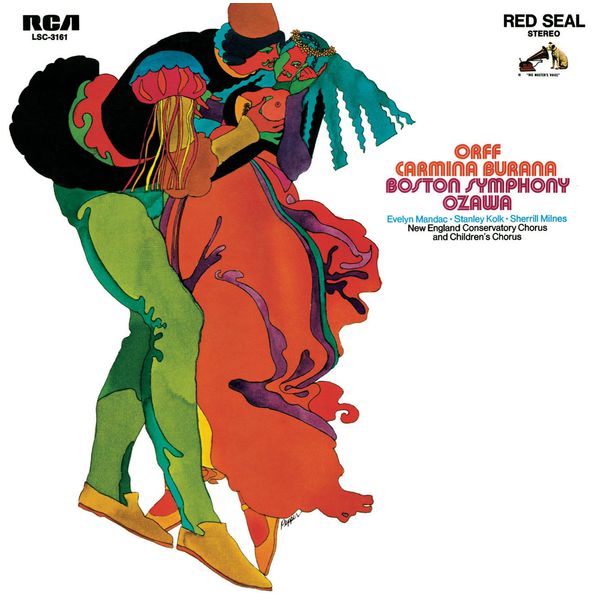 My favorite has never been released--Neeme Jarvi's Detroit Symphony live performance from the '91-'92 season. It's the friskiest, most impetuous of all and Jarvi stirs his forces into a very fine frenzy. More rapid tempos than usual.

Makes one wonder at his mellow rendition from the '94-'95 season....really off-putting..
If I could tell my mom and dad
That the things we never had
Never mattered we were always ok
Getting ready for Christmas day
--Paul Simon
Top

A recording will be available next fall/winter.

"Carmina Burana" is not one of my favorite works - it's one of those that I really liked initially, but after much exposure it lost its attraction - perhaps it's the repetitious sing-song-y quality of so much of it that puts me to sleep...
there are certain selections I do enjoy, tho - and I always enjoyed playing the "cooked goose" bassoon solo with as much humor, pathos, and tongue-in-cheek as I could muster...

have always filled the bill for me.
I don't listen to it much, tho.

That said - my favorite version[s] of Carmina are the small wind ensemble arrangements done by one of Orff's students - for double WW 5tet - 5 of the selections are done for this arrangement - very fun, most enjoyable...very Stravinsky-like in sound - similar to IS' 8tet, or L'Histoire..
I am hoping to program these little gems for my chamber group over the next year or two...
Last edited by Heck148 on Fri May 30, 2014 9:50 pm, edited 1 time in total.
Top

I've never liked this one. I've tried very hard to like it and I have six or eight different recordings, but it sounds coarse and fake to me. Maybe someday the light will go on in my head and I will get it. It's happened before.
Top

Harold Tucker: a thousand pardons, I meant Rafael Frühbeck de Burgos, but was looking at the Giulini/Verdi/Requiem cover when I keyed that in. So very sorry.
Top

I've had a few recordings pass through my CD rack, starting with the Fruhbeck De Burgos but the only one that really captures the spirit and vitality to me is the Ormandy/Philadelphia. An old recording, maybe, but the rest now seem fairly pedestrian with a few highlights and nothing overall to write home about.
Top
Post Reply
15 posts • Page 1 of 1