I do like the Polish scene-sue me! Regards, Len

It’s one of the RO’s hottest tickets — a rare occurrence for this opera, in my experience — and for the first time in decades the company performs the original seven-scene version, without a break. In recent European productions, this has become the new normal for Boris productions, although it goes back to Pavel Lamm’s radical edition for a 1928 Leningrad production, when the version made for the great Russian bass Feodor Chaliapin by Rimsky-Korsakov in 1908 was jettisoned for Musorgsky’s shorter, pithier 1869 score — austerely orchestrated and rejected by the great Russian theatres.

There may be some who hanker after the glitter and glamour of a Rimskyfied Boris, with its “Romantic” Polish act, but Musorgsky’s first thoughts strike me as more coherent and dramatically convincing. They certainly do in this staging, full as it is of Jones’s directorial tics: singers striding across the stage, a dumb show in which the real Tsarevich Dmitry (Ivan the Terrible’s son, whose disappearance haunts Russian history as much as the Princes in the Tower do ours) is repeatedly murdered by masked assassins.

Almost everything Jones does in Miriam Buether’s handsome set — a black box embossed with bells, with a vaulted second stage above — is stylised, yet Boris’s tragedy and that of the Russian people are movingly outlined. Renato Balsadonna’s reinforced chorus is the evening’s star turn, especially in the Coronation scene, where Nicky Gillibrand costumes them as if for a Diaghilev Ballets Russes spectacular.

Terfel takes a couple of scenes to get his bass-baritone into gear, and he wears his coronation robes awkwardly, but by the time he gets to his monologue “I have attained supreme power”, his voice relishes the words, and his psychological depiction of the guilt-racked monarch deepens, reaching its climax in his heartbreaking encounter with the Holy Fool (Andrew Tortise) outside St Basil’s Cathedral and, above all, in his final meeting with his son Fyodor (a beautifully observed cameo from the boy treble Ben Knight). His confrontations with the other principal players, John Graham-Hall’s easily dislikeable, Uriah Heep-like Shuisky and Ain Anger’s gravely sung Pimen — a Boris in the making — ooze a creepy sense of political machination. Boris’s mad appearance in the council chamber has rarely been more frightening.

It’s a good ensemble cast that achieves much more thanks to Pappano’s conducting. The RO’s music director hasn’t done much Russian opera, but on the evidence of this darkly unfolding panorama of that nation’s history, he should obviously do more.

"'No,' they answered me, 'it's impossible. How can there be an opera without the feminine element?! Mussorgsky has great talent beyond doubt. Let him add one more scene. Then Boris will be produced!'"[18]
— Lyudmila Shestakova, in My Evenings, her recollections of Mussorgsky and The Mighty Handful, 1889

Other questionable accounts, such as Rimsky-Korsakov's, allege that there were additional reasons for rejection, such as the work's novelty:[19]

"...Mussorgsky submitted his completed Boris Godunov to the Board of Directors of the Imperial Theatres ... The freshness and originality of the music nonplussed the honorable members of the committee, who reproved the composer, among other things, for the absence of a reasonably important female role."[20]
— Nikolay Rimsky-Korsakov, Chronicle of My Musical Life, 1909" Wiki
Top

Gergiev put out an excellent set of 5 CDs which contains complete recordings of both of Mussorgsky's versions, with and without Marina Mnishek and Rangoni. For Boris fans, it should definitely be in your library, along with the Rimsky version: 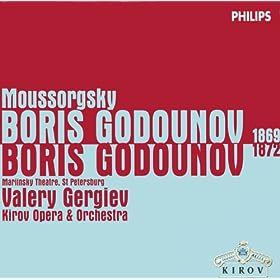 Canning is entitled to his opinion, but I definitely don't share it. Musorgsky added what's now Act 3 on demand from the theatre, but he put his best into it, and from his lifetime until recently the opera was never performed without it. This is not the same as what Canning calls the Rimskyfied version; the choice between that and Musorgsky's original versions is a completely different issue from whether or not to include Musorgsky's original Polish act.

Incidentally, by the 1960s the Kirov Opera had replaced the Musorgsky original with the version by Shostakovich, which is based on the Lamm edition and leaves the music as is, but with new orchestration. Shostakovich was no textual purist and included everything Musorgsky composed for "Boris," including the Polish act. Meanwhile, down the road at the Bolshoi Theater, Rimsky-Korsakov's version was used without apology at least until the 1970s, when they brought it to the Met on tour. That has its own kind of authenticity, since it's how "Boris Godunov" became known and entered the world repertory when Musorgsky's original failed to do so. And between you and me, I like it better, though today I can only hear it in older recordings such as those with the great Boris Christoff.
John Francis
Top 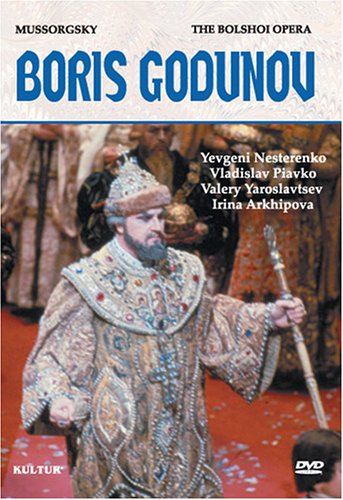 This DVD recorded in 1982 with Nesterenko as Boris is based upon the Rimsky version, although it does not include the confrontation scene between Marina and Rangoni due to Soviet preferences. That scene was cut in Russian performances because government censors did not like how the scene showed that the church could apply political pressure to leaders of the state. 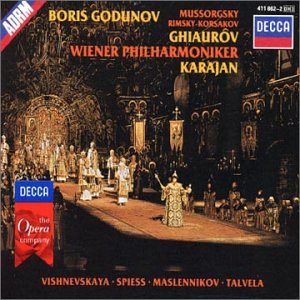 Ghiaurov's Boris was recorded in Vienna with HVK and includes the complete Rimsky-Korsakov score IIRC.
Top

I have this one and love it. Regards, Len

Though I love the Gergiev, the Karajan and the old Melyk-Pashaev versions, it is the Abbado the one I enjoy the most.
Top

The Rimsky version is highly effective on its own terms , but among other things, it bowdlerizes some of Mussorgsky's audacious harmonies , which his friend Rimsky-Korsakov thought much too rough and musically "ungrammatical ".
Top

The reharmonization is one reason why I like the Rimsky-Korsakov version. One need not think Musorgsky's original "ungrammatical" or incompetent to feel somehow unsatisfied when listening to it. Rimsky's version made a "Boris" enthusiast of me in my teens and it still satisfies me very much.
John Francis
Top

John F wrote:The reharmonization is one reason why I like the Rimsky-Korsakov version. One need not think Musorgsky's original "ungrammatical" or incompetent to feel somehow unsatisfied when listening to it. Rimsky's version made a "Boris" enthusiast of me in my teens and it still satisfies me very much.

John, you are spot on. The R-K version is how I came to love Boris in my teens and I still listen to it, usually with the great Boris Christoff and his once in a lifetime voice.