Finish to Schubert's symphony was far from artificial
Donal O’Keeffe

Taking my seat in Belgravia’s historic Cadogan Hall for the first public performance of Unfinished Symphony, a modern-day completion of a revered work of classical music using the artificial intelligence in a smartphone, I found myself thinking of Star Trek’s android Lieutenant Commander Data.

When Franz Schubert left his Symphony Number 8 in B Minor unfinished beyond its second movement, some said the work was so perfect, it didn’t require a third. That didn’t prevent others from attempting to complete the Austrian master’s work in the almost two centuries since Schubert’s death. The latest effort to finish the Unfinished Symphony uses technology as far beyond the early 19th century as warp drives and positronic brains are beyond our own.

Schubert had sketched out a third movement in 1822, and – legend has it - a fourth movement was ready to go, but reportedly he ended up recycling the music planned for the fourth into a more pressing project, the incidental music for the play "Rosamunde, Fürstin von Zypern" which premiered the following year.

Some think Schubert - who died in 1828 at the tragically young age of 31 – was already suffering the onset of the syphilis which is thought to have killed him (though it was recorded officially as Typhoid Fever). While it is theoretically possible he was distracted by ill health, a look at the prodigious works completed by Schubert in his final years suggests it’s more likely he was distracted from his great work on the Eighth Symphony by his great work on all of his other great works. He was a powerhouse of innovation and originality right to the end.

We’ll likely never know why Schubert abandoned his Eighth. But now, 197 years later, the Chinese technology giant Huawei has embarked upon an intriguing project to complete it, using – at least in part – an Artificial Intelligence model benefitting directly from the processing power of the dual NPU (Neural Processing Unit) in the Huawei Mate 20 Pro smartphone. The A.I. analysed the timbre, pitch and meter of the first and second movements, using this data to generate melodies replicating Schubert’s style. Huawei then employed Emmy-winning composer Lucas Cantor to arrange those melodies into a hypothetical completed Symphony No 8.

The finished work is beautiful, but sounds – to these untrained ears – uneven, in the sense that there appears to be a clear temporal shift from Schubert’s original first and second movements, which are of the early 19th century, and the new third and fourth movements which feel very much of the early 21st century. That said, Cantor had an impossible task. Had he produced a slavish reproduction of Schubert’s style, he would likely have been accused of soulless painting-by-numbers...

Listening to an orchestra play music composed – for the most part – by the artificial intelligence inside a smartphone, I found myself wondering if our phones mightn’t now be smarter too than a robotic innocent savant from the imagined 24th Century.

Which brings me to Data.

"Star Trek: The Next Generation," a sequel to the original 1960s show, began in 1987. Data, played by Brent Spiner, was Science Officer on the USS Enterprise NCC 1701-D, a ship launched a century after the Enterprise captained by William Shatner’s James T. Kirk. Data was the spiritual heir to Leonard Nimoy’s Spock, but where the superior Spock disdained and denied his own half-human emotions, poor white-faced, golden-eyed Data was an artificial life form which lacked human feelings but strove tirelessly to understand and emulate humanity.

As I watched the premiere of Unfinished Symphony, I remembered a 30-year-old Star Trek episode called “The Ensigns of Command”. In it, Data plays the violin in a string quartet. He warns Captain Picard (Patrick Stewart) that while it is technically flawless, he has been told his playing lacks soul. On hearing Data replicate and combine successfully two very disparate playing styles, Picard disagrees, complimenting him on his creativity.

With a human being still needed to curate the melodies generated by Huawei’s smartphone A.I., we are not yet at the point where artificial intelligence can be independently creative, but – as Commander Data might put it – Huawei’s Unfinished Symphony is an intriguing experiment which shows considerable potential for future innovation.

OK, so here it is, about 7 minutes of it before the recordist cut it off::

The music starts at about 5:00. If you kind of recognize the beginning, you aren't the only one.

I recall an lp which had the 3rd mvt section. Seems like it was on the Odyssey (Columbia product) label.
Top

In Neville Marriner's set of the Schubert symphonies, Brian Newbold completed and orchestrated the third movement and then used extracts from "Rosamunde" to construct a fourth movement. I don't play the set very often, but at least the results are inoffensive. 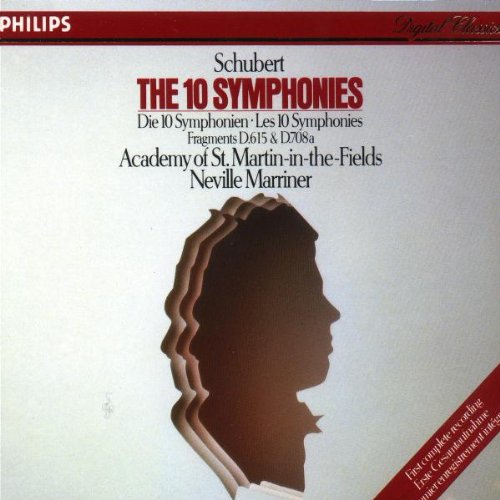 Users browsing this forum: No registered users and 71 guests