The news has just come out that conductor Michael Gielen just died. The German website I've linked to describes him as a composer, but I remember him mainly as a conductor.

Specifically, I remember him as the conductor of a 1973 recording of Schoenberg's Moses und Aron which I found mind-blowing and eye-opening in my college years. I used to play the Golden Calf scene for my music-student friends, and they'd say they didn't realize they could enjoy Schoenberg and 12-tone music so much.

The news doesn't seem to have reached the English-language press yet, though I'm sure it soon will.

I heard a wonderful Ring Gielen led in Germany during the 1980s. I also collected his Cincinnati recordings. I thought he was an important conductor of 20th-century modernists.

Gielen was a great friend and supporter of Carlos Kleiber and he can be seen talking about Kleiber in one of the documentaries made about the conductor in 2010/11.

A life well lived. Thanks for the great contribution to music, Maestro Gielen.
Top

I agree. In addition to his "Moses und Aron," I have a broadcast performance of "Die Jakobsleiter" that outdoes the Boulez recording. Less so in earlier repertoire, I think; I heard a "Magic Flute" from him in 1961 that I thought was rather brutal. But in what he was good at, Gielen was very good indeed.
John Francis
Top

Gielen has been around for a long time. I have nothing considered "contemporary" him on recordings, and I didn't realize he was a composer. The recordings I have are not on major labels but include collaborations with Alfred Brendel, Friedrich Führer, Felicja Blumental, Stefan Litwin, Nelson Freire (all pianists in concertos), and some orchestral music of Ravel, Stravinsky and Schreker. I see that Hanssler did him great honors by presenting an "edition" for the conductor. A complete Beethoven and Brahms symphony cycle, some Schubert and Schumann, and quite a few others. Lots of Bruckner and Mahler. I see that Brilliant brought on his Schoenberg "Moses und Aaron." The Cincinnati Symphony Orchestra recordings appeared on the Vox label with some available on CD.
Lance G. Hill
Editor-in-Chief
______________________________________________________

Thanks to a friend in Germany, I have a LOT of live Gielen conducting, and I particularly like his Mahler 3, 4, 5, 7, 9. I think of him as being in the Scherchen/Rosbaud/Maderna tradition.

Much to my surprise his 1986/7 Frankfurt Opera Ring really grabbed me. I had not associated him with Wagner. He also conducted Mozart: Don Giovanni at the Met in 1960:
Last edited by jserraglio on Sat Mar 09, 2019 8:41 am, edited 1 time in total.
Top

Informative interview recorded backstage at Orchestra Hall in Chicago on March 22, 1996, illustrated with some of his recording album covers.

Free listening for awhile ( I have not heard ):

Thanks, I will listen.

The Flight of Lindbergh
https://www.youtube.com/watch?v=1834Pk8kGCM

I missed this thread while in nyc and posted my own message which I just deleted. Regards, Len 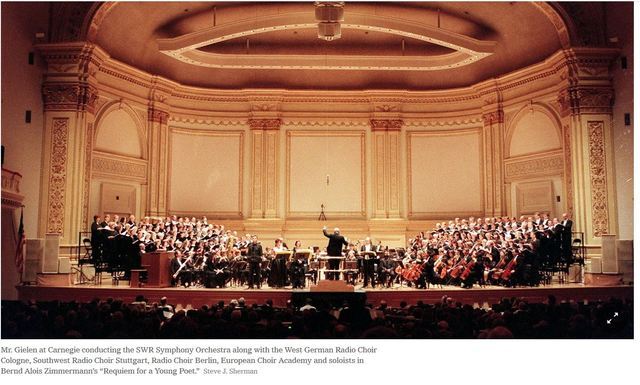 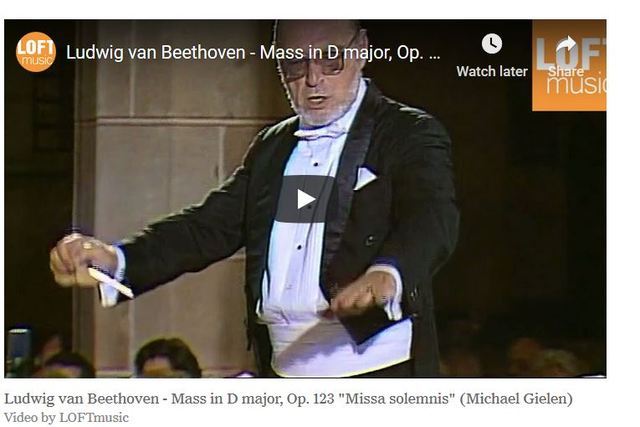 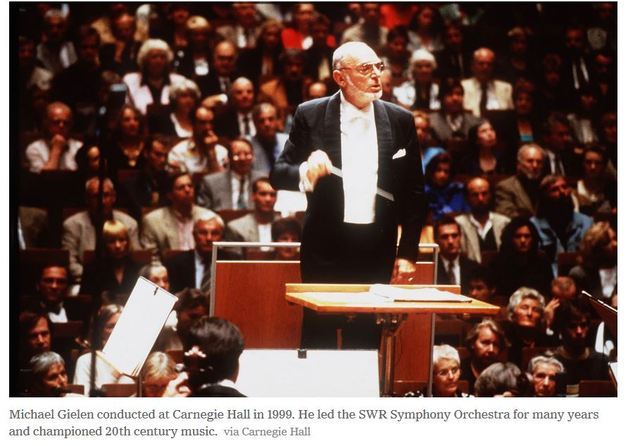 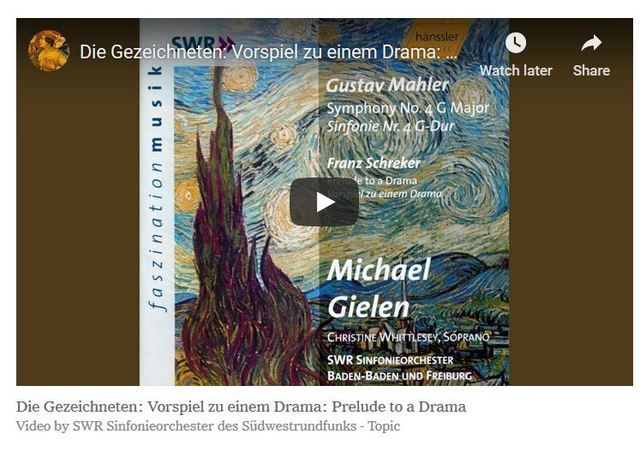 Michael Gielen, a probing conductor who championed contemporary music and daring opera productions, died on Friday at his home near Mondsee, Austria, east of Salzburg. He was 91.

His death was confirmed by the German broadcaster SWR.

Mr. Gielen was active mostly in Europe, and one of his most important posts was as general music director of the Frankfurt Opera, a job he held for a decade starting in 1977. There he gave the German premieres of works by Luigi Nono and Alban Berg, revived overlooked works by Ferruccio Busoni and Franz Schreker, and invited the most ambitious directors to stage standard repertory.

Working with the dramaturge Klaus Zehelein, Mr. Gielen collaborated with Jürgen Flimm, Harry Kupfer, Hans Neuenfels (including for a pivotal “Aida” in 1980) and Ruth Berghaus, who produced Wagner’s “Ring” in notably symbolic fashion.

In 1987, John Rockwell of The New York Times called the Frankfurt house “the most prominent exponent in the world of radical operatic stage direction and design.”

That orchestra, backed by the resources of German state radio, gave him the freedom to promote the newest of music, especially at the Donaueschinger Musiktage, a festival in southern Germany for contemporary composers.

He remained the orchestra’s permanent guest conductor after stepping down in 1999, and later protested its merger with a sister ensemble in Stuttgart.

His SWR orchestra recordings included a particularly lucid Mahler cycle, the symphonies of Beethoven and Brahms, and pieces by Bruckner, Stravinsky and the composers of the Second Viennese School. All prized detail and restraint over overt emotionality.


The conductor Daniel Barenboim, who knew Mr. Gielen for almost 70 years and appointed him principal guest conductor of the Staatskapelle Berlin in 1999, said in a telephone interview that Mr. Gielen had always been “in search of what he considered the musical truth, for the solutions that were given to him by the score — and not by outside ideas.”

Mr. Gielen, who won the prestigious Ernst von Siemens Music Prize in 2010, viewed music as a disciplined intellectual pursuit that, more than providing comfort or entertainment, should shed light on the conflicts of the age, both in the world at large and in humanity’s inner life. He particularly argued for confronting the horrors of the mid-20th century, represented by Auschwitz and Hiroshima.

“If musical life does not convey this central experience of our time, which is the ‘Age of Anxiety,’ ” he said, “then it is not a cultural life, but a cultural lie.”
Ludwig van Beethoven - Mass in D major, Op. 123 "Missa solemnis" (Michael Gielen)CreditCreditVideo by LOFTmusic

Mr. Gielen conveyed his views through programming. A typical ploy was to preface Beethoven’s Ninth Symphony with Schoenberg’s reflection on the Holocaust, “A Survivor From Warsaw.” He even inserted the piece between the symphony’s heavenly slow movement and its paean to human brotherhood, the “Ode to Joy.”

In a program note for the Cincinnati Symphony, Mr. Gielen wrote, “The greatness of the Ninth, its beauty, the shattering horror of the fanfare that begins its finale, these can fully reach us today only when we confront the other side of man.”

Michael Andreas Gielen was born on July 20, 1927, in Dresden. His mother, Rose Steuermann, was an actress and soprano noted for her account of Schoenberg’s “Pierrot Lunaire;” his father, Josef Gielen, was a director at the city’s state theater, entrusted by Richard Strauss with the premieres of “Arabella” and “Die Schweigsame Frau.”


Though their mother was Jewish, Michael and his older sister, Carola, were baptized as Catholics in 1935, but the Nazis hounded them all the same. They followed their father first to Berlin, then to Vienna, and finally to Buenos Aires, in 1940.

In Argentina, Mr. Gielen was brought up among an exiled musical elite. He studied piano and composition under Erwin Leuchter, who had been Anton Webern’s assistant, and heard the operatic repertoire under the baton of Fritz Busch.

After he withdrew from the University of Buenos Aires in 1946 and became a coach at the Teatro Colón, Mr. Gielen rehearsed “Tristan und Isolde” with the soprano Kirsten Flagstad and the conductor Erich Kleiber in 1948. When Wilhelm Furtwängler led Bach’s “St. Matthew Passion in 1950, Mr. Gielen played the recitatives.

Again following his father, Mr. Gielen returned to Europe in 1950, and to the Vienna State Opera, where he assisted Clemens Krauss, Dmitri Mitropoulos and Karl Böhm. He continued to compose, and his Variations for String Quartet (1949) were performed in Darmstadt, the home of postwar experimentalism. But podium opportunities proved more alluring, and Mr. Gielen became a staff conductor at the opera, leading everything from Mozart to Honegger.


As the music director of the Royal Swedish Opera from 1960 to 1965, Mr. Gielen oversaw a radical production of Stravinsky’s “The Rake’s Progress,” with Ingmar Bergman directing.

As a guest conductor Mr. Gielen had a string of successes in famously challenging new music, overseeing the premieres in 1965 alone of Gyorgy Ligeti’s Requiem in Stockholm, Aribert Reimann’s “Traumspiel” in Kiel and, in Cologne, Bernd Alois Zimmermann’s “Die Soldaten,” a major but neglected work of the last century. He was at the helm of the Belgian National Orchestra from 1969 to 1973 and the Netherlands Opera from 1973 to 1975.

Survivors include his wife, Helga Gielen, a soprano he married in 1957; their two children, Claudia and Lucas; and several grandchildren.

Among Mr. Gielen’s compositions was “Pflicht und Neigung” (1988), which he recorded together with works by Schoenberg, Berg, Webern and Eduard Steuermann, his uncle, as a tribute to those 20th-century figures. The title translates to “Duty and Inclination.”

“In order to make musical life meaningful, profoundly meaningful,” he told The Times in 1982, “one needs this kind of music as part of the program. I cannot live with the conscience of the truth being there waiting to be said and not being said.”