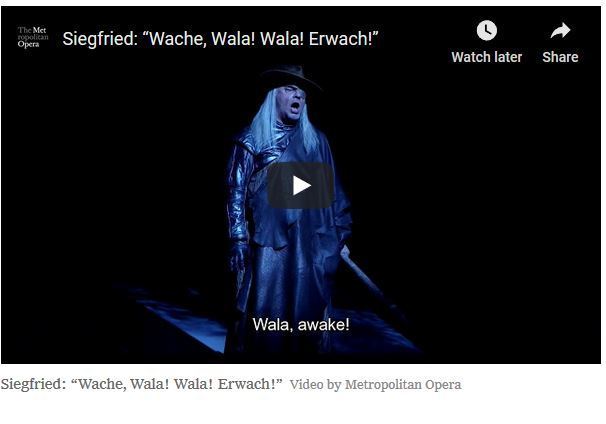 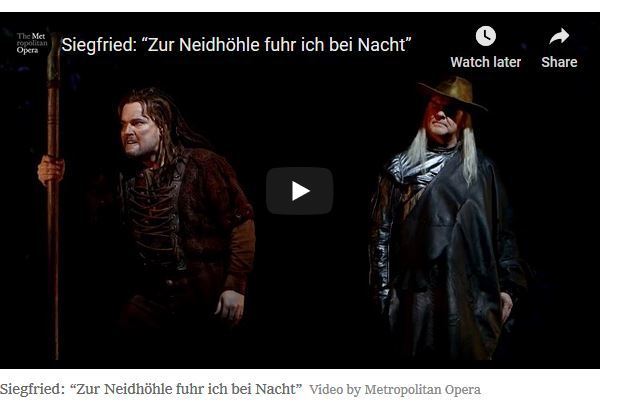 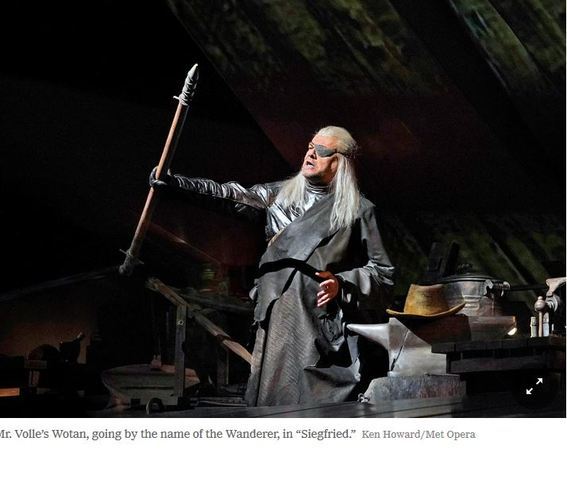 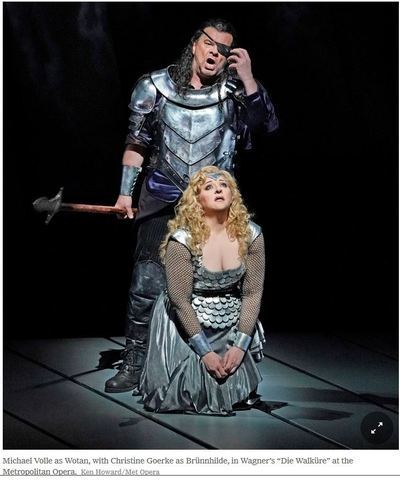 It is one of the pinnacle roles in all of opera: Wotan, king of the gods in Wagner’s epic “Ring.” It’s a nearly fathomless part that demands a beautiful voice, power, subtle acting, keen intelligence and stamina. Great Wotans don’t exactly grow on trees.

At the Metropolitan Opera, the German baritone Michael Volle has donned an eye patch and picked up a spear to sing his first complete “Ring” cycle (performances continue through May 11). Here, three of The New York Times’s classical music writers — Michael Cooper, a reporter, Joshua Barone, a senior staff editor and critic, and Seth Colter Walls, a critic — discuss his astonishing performance so far.

MICHAEL COOPER I was struck by how Mr. Volle navigated a chilling moment in “Die Walküre,” the second “Ring” opera.

Wotan has just reluctantly caused the death of his own son by intervening in an earthly battle.

His sad duty done, the heartbroken, furious god dismissively dispatches the victor he has just assisted, and, with just a word — “Geh!” (“Go!”) — strikes his son’s killer dead.

Some great Wotans of the past would almost whisper that “geh,” including Hans Hotter, whose recordings I literally wore out, and James Morris, whose rich, fluid voice made him the Wotan of my youth. I once heard John Tomlinson practically roar it, and Bryn Terfel contemptuously snarl it.

Mr. Volle growled it ferociously — the kind of growl it almost hurts your throat to hear. But he returned in the next act singing as well as ever. One moment he was terrifying in his wrath, the next he was singing the tenderest, most lieder-like of lullabies in his farewell to his rebellious daughter, Brünnhilde. It was as gutsy, and colorfully varied, a Wotan performance as any I can remember.


JOSHUA BARONE Growl is exactly the word for that moment in “Walküre,” the “Ring” opera in which he may give his best performance. But I don’t want to discount his Wotan in “Das Rheingold,” the opening of the “Ring,” or “Siegfried,” the third of the four operas — especially since he so distinctly inhabits each stage of the god’s downfall.

There wasn’t a lot of nuance to Mr. Volle’s “Rheingold,” which I realized was exactly what the role calls for then: Wotan is fatally confident and carefree, from beginning to end. The cocksure patriarch who thinks he can manipulate his way to a free fortress is the same one who, annoyed by the Rhinemaidens lamenting their lost gold, barks at Loge to silence them as the opera comes to a close.

In “Siegfried,” which he was singing for the first time, I found Mr. Volle ever more desperate.

COOPER Yes, his baritone — which is on the bright side for a Wotan — brought out the god’s delight in toying with his foes early on. But as the night progressed, the existential terror beneath the surface kept peeking through, as the doomed god vacillated between accepting his fate and resisting it. His vocal acting made his final scene — in which Wotan picks a stubborn old man’s quarrel with the impetuous grandson he loves and loses his power — into a “King Lear”-like tragedy.

BARONE With each note, his characterization is clear, a trait he shares with the excellent bass-baritone Tomasz Konieczny, who is singing Alberich. That’s why their shared scene in Act II of “Siegfried” — as sung by Mr. Volle and Mr. Konieczny, a glimpse into the desperate and different ways two characters hungry for power try to reclaim it — is a highlight of that opera, rivaled only by Mr. Volle’s farewell to the saga, in Act III, in which his Wotan is by turns exasperated, determined and jaded.


But back to “Walküre”: His emotional goodbye to Brünnhilde in the final scene was the first time that sadly beautiful music had me fighting back tears. And how about his monumental narrative in Act II?

SETH COLTER WALLS Yes! The Act II narrative in “Walküre” was one of the most astonishing passages of the evening, as both music and drama. When I was listening to it, I realized I was no longer bothered by the on-the-nose (on-the-eyeball?) quality of this production’s video projections.

How did Mr. Volle manage that? For one thing, his scene partner here — the soprano Christine Goerke, as Brünnhilde — is mesmerizing even when she’s just listening. It also helps that Mr. Volle gives her something to react to throughout this long bit of exposition, which can come across as a “Previously on ‘Valhalla’”-type recapitulation.

Mr. Volle’s Wotan has a lot of moods. In “Walküre,” he knows what ails him, but he’s not resigned to it, yet. He’s still processing. And this Wotan’s access to a quick-marshaling anger also reflects some of Wagner’s stage directions: wanting the character to sound subdued during one little section, then more animated for a couple of beats, then ramped back down. (Those directions are included in a recent translation of the “Ring” librettos by Penguin Classics.) Mr. Volle observes these varied indications, even when the production is all too static.

I was lucky enough to catch one of James Morris’s Wotans in the Met’s previous production, by Otto Schenk. I can confirm that his voice remained luxuriously rich and smooth in this part as recently as 2008. But he was also perhaps a little too smooth, in terms of dramatic characterization. For me, the value of Mr. Volle’s performance is the way it opens up new interpretive avenues.

COOPER Those rapid changes of voice and mood allowed Mr. Volle to embody both sides of Wotan’s many paradoxes: his power and impotence, his idealism and unscrupulousness, his warring desires for love and power. I have heard nobler Wotans and more craven ones, but by giving voice to both aspects Mr. Volle showed that they were not only not mutually exclusive, but intimately related.

He is 59, so it is difficult to say how long Mr. Volle’s reign in Valhalla will last. He has another full “Ring” cycle this September at the Berlin State Opera, under the baton of Daniel Barenboim, and is planning to sing it in Dresden, Germany, in a future season with Christian Thielemann.

But at the Met, when he took his bow on Thursday night after singing his first complete “Ring,” flipping up his eye patch to take in the cheering crowd, a bouquet of pink flowers was tossed at his feet. There was a new Wotan in the Wagnerian firmament.

Re: A New Wotan Reigns in the Metropolitan Opera’s ‘Ring’

The mediocre Greer Grimsley has been singing Wotan in this season's Ring cycles, including the HD transmission of "Die Walkure," and I didn't know that Michael Volle has been brought in to sing the final Ring cycle only. That's certainly an improvement, and he should have sung them all, though neither of them nor indeed Bryn Terfel are a patch on Hans Hotter, the Wotan of my lifetime.
John Francis
Top

Re: A New Wotan Reigns in the Metropolitan Opera’s ‘Ring’

Well, Mr. Volle's performance sounds like something to look forward to.