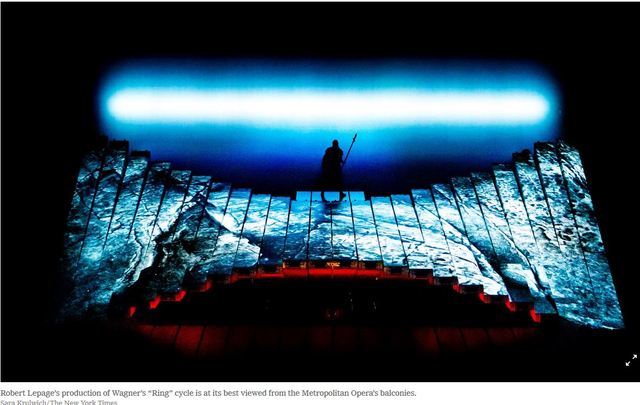 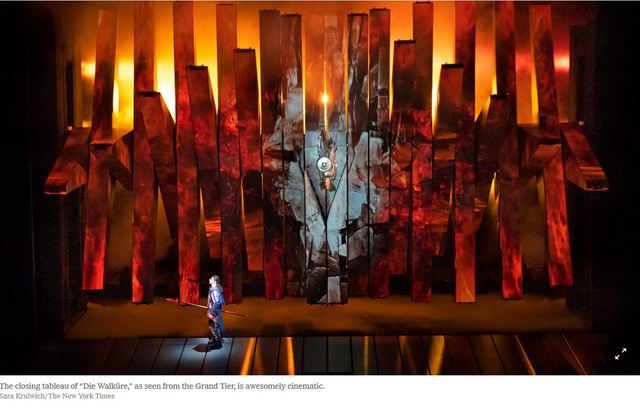 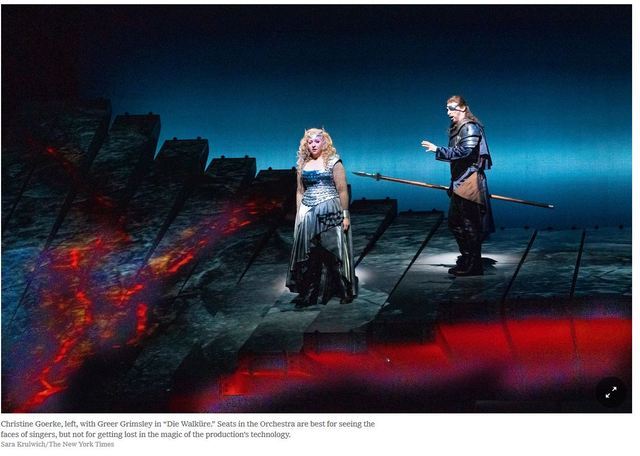 When the Metropolitan Opera began to roll out Robert Lepage’s production of Wagner’s “Ring” cycle, in 2010, I was a student who spent most of my time at the Met in the Family Circle — the uppermost, least expensive seats.

The “Ring” I remember was musically imperfect but visually awesome, with moments of stunning grandeur. This wasn’t the “Ring” I read about in the press, though.

Most of the critics loathed the 45-ton machine at the heart of Mr. Lepage’s production: a hulking kinetic sculpture made of 24 planks that spin into a variety of configurations conjuring the dozen-plus sets called for in Wagner’s four-opera saga. (The scenic design is heavily reliant on animating the machine with video projections.)

Anthony Tommasini, in The New York Times, called it “the most frustrating opera production I have ever had to grapple with.” Alex Ross, in The New Yorker, went so far as to say, “Pound for pound, ton for ton, it is the most witless and wasteful production in modern operatic history.”

I have wondered in the years since whether this disconnect between my experience and theirs was simply a matter of perspective. Is it possible that the “Ring” could feel like two different productions depending on whether you’re seeing it from up close, where most reviewers sit, or far away?


So when the “Ring” returned this season — there is one more cycle that continues through Saturday — I saw all 15 or so hours of it twice in a row: from the Grand Tier (the third level up) and from the ninth row of the Orchestra section.

The short answer is that yes, this “Ring” works best from farther away and, more important, higher up. But the reason reveals how Mr. Lepage’s production provides little more than thin spectacle and leaves singers stranded like actors performing against a green screen.

Luckily, this run of the “Ring” has been exceptionally well cast, and Mr. Lepage’s dramaturgical deficiencies have been more than made up for by, say, Tomasz Konieczny’s complexly noble Alberich, or Andreas Schager’s comically bumbling Siegfried, or Michael Volle and Christine Georke’s heart-rending Wotan and Brünnhilde in the final scene of “Die Walküre.” And Mr. Lepage’s machine’s aluminum surfaces amplify what are already powerful voices, allowing singers to penetrate the orchestra even when, under the baton of Philippe Jordan, the playing was at its mightiest.


The set has the singer-friendly acoustics of the Bayreuth Festival theater where Wagner first presented his “Ring” in the 1870s. From my seat near the Met stage, the voices didn’t have to struggle to compete with the orchestra. With some distance, in the Grand Tier, the sound was superbly balanced.

That’s why I occasionally found myself, despite the ever-present machine, focused only on the music. The singers sounded like they were interrogating every syllable of Wagner’s libretto even when Mr. Lepage appeared to be looking no further than the description of each scene’s setting.

Never is Mr. Lepage more ambitious than in “Das Rheingold,” the first installment of the “Ring.” The machine is restless: wavy as the arpeggios of the prelude bring the Rhine River to life, then reconfiguring itself as fluidly as the opera, which unfolds over four scenes with no break.


Which is also what makes “Rheingold” the noisiest of Mr. Lepage’s productions. Although the machine is significantly quieter than in the original run nearly a decade ago, it still creaks and sighs — from close up, at least. In the Grand Tier, I barely heard a thing.

Other aspects of the technology, too, suffer from proximity. From the Orchestra, the projections look pixelated, like a low-resolution image blown up, and it’s impossible to avoid noticing the ropes that support acrobatic body doubles. You can’t see what you wish you could: I nearly missed the giant Fasolt’s death, it was so obscured by the machine; and the stage’s apron often blocked singers from the waist down.

But with some distance, the projections are sharper — especially the pebbles of the Rhine, animated to roll around under the Rhinemaidens’ fins — and acrobatic moments, like the descent into Nibelheim and the crossing of the Rainbow Bridge, inspire awe.

With “Die Walküre,” Mr. Lepage achieves something more refined while still exploiting the machine’s potential. Act I blends analog theater with the virtual: Stage snow falls in the background while, farther downstage, the planks evoke a wood ceiling dimly lit by flickering fire. Siegmund’s narrative — and Wotan’s in Act II — is animated by large and clarifying (if a bit obvious) films that cater to the audience in the cheap seats.

And from the balcony levels, the “Ring” doesn’t get any better than the closing tableau of Brünnhilde asleep on the mountain, surrounded by fire — a scene that, up close, allows you to see the singers’ facial expressions, but also the woeful digital fire projections.

You get the feeling Mr. Lepage had lost faith in his problematic machine — or perhaps had run out of time for sophistication — by the final two “Ring” operas, in which the planks become little more than a curtain for projections. These two productions all but require distance to tolerate: The forest animations of “Siegfried” have the quality of video games from the 1990s and early 2000s, an era when you might have also seen the spirograph and screen-saver-ish projections of “Götterdämmerung.”

In the closing moments of that final opera, a scene in which a cleansing fire and flood devour civilization and offer rebirth, Mr. Lepage comes up only with a wall of water projections and some smoke surrounding statues of gods. This should be the apotheosis of Wagner’s epic, but it’s the low point of Mr. Lepage’s production. No change in perspective could fix that.