The Central Park Five” is now an opera.

The Central Park Five” is now an opera. 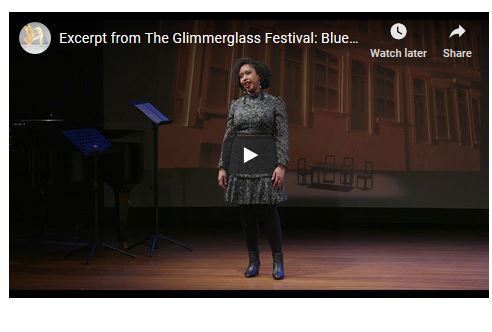 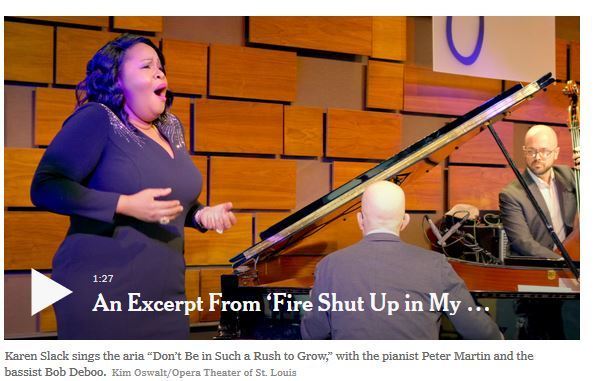 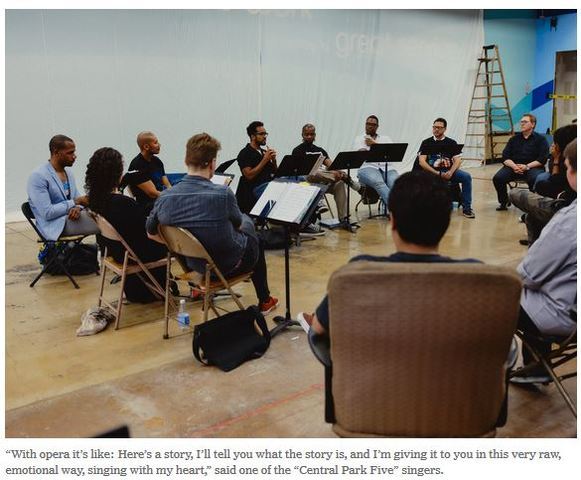 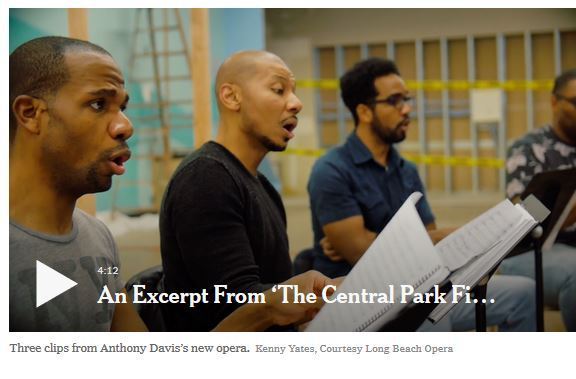 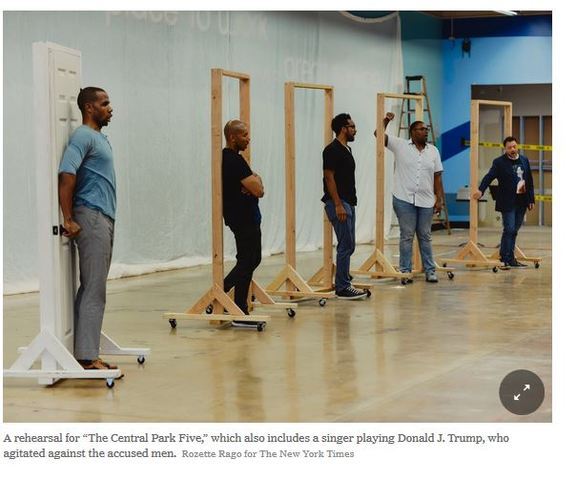 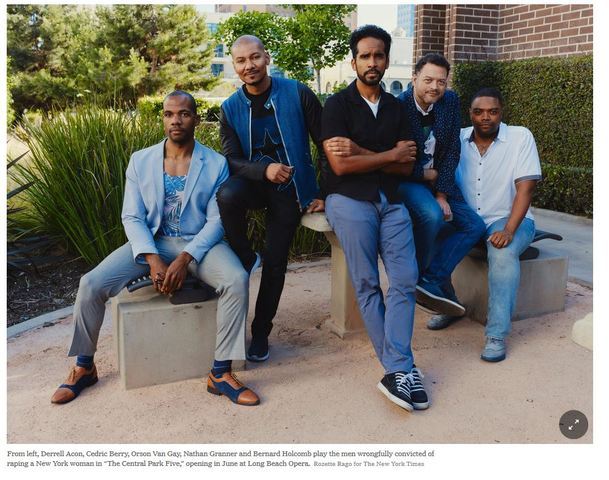 This Summer, Opera Grapples With Race

LONG BEACH, Calif. — Even before he became president, Donald J. Trump was a character in the opera Anthony Davis was writing about racism and injustice, “The Central Park Five.” But the role grew as the piece was reworked for its premiere in June at Long Beach Opera.

“Bring back the death penalty!” Trump, the opera character, sings in one scene. The line comes straight out of a full-page ad that Mr. Trump took out in New York newspapers in 1989, shortly after five African-American and Latino teenagers were charged in the brutal beating and rape of a jogger in Central Park.

In the wake of breathless news coverage that stoked fears of crime and inflamed racial tensions in the city, the five men spent years in prison for the attack before another man confessed, DNA evidence backed his account, and their convictions were overturned.

Their story has already been told in books, documentaries and a new Netflix series. Now it is becoming an opera.


“The Central Park Five” is one of several new works through which American opera companies are exploring questions of race, identity, personal history and the criminal justice system, as the often staid world of opera works to catch up to other art forms. When it comes to telling diverse stories by diverse creative teams, opera has remained strikingly pale, even compared with #OscarsSoWhite Hollywood.

“I have been so thrilled seeing these operas coming out now, writing blackness into history in this unlikely place: on the opera stage,” Naomi André, a professor at the University of Michigan who wrote “Black Opera: History, Power, Engagement,” said in an interview.

The same day “The Central Park Five” opens in California, “Fire Shut Up in My Bones,” a new opera by the jazz trumpeter and film composer Terence Blanchard based on the memoir by Charles M. Blow, will open at Opera Theater of St. Louis. In July, the Glimmerglass Festival in Cooperstown, N.Y., will give the premiere of “Blue,” an opera by the Tony Award-winning composer Jeanine Tesori about an African-American family whose son is killed by a police officer.

The focus on race in the opera houses comes after a white nationalist march in 2017 in Charlottesville, Va., was met with an equivocal response from the president; a series of scandals about state officials wearing blackface or using images of it in their yearbooks; and a stream of shootings of black men by the police. It is a change for an art form that told such stories only sporadically, if at all, in the past.

Mr. Davis may be considered the dean of African-American opera composers. He has been writing operas for more than 30 years, going back to “X: The Life and Times of Malcolm X,” which Beverly Sills brought to New York City Opera in 1986, and “Amistad,” which had its premiere at Lyric Opera of Chicago in 1997 — grand stories, grandly told.

In an interview, he remembered a conversation he once had with a prominent director who maintained that the age of the epic opera had passed.

“I told him, ‘No, no, no, just because you white guys are done with it, we’re not done,’” Mr. Davis recalled. “Because our stories have not been told. So forget that!”

Here is a look at the works having their premieres this summer.


In a cavernous, abandoned supermarket that Long Beach Opera had commandeered as a rehearsal space recently, the quintet of singers playing the five wrongfully convicted men were harmonizing about the fragility of their worlds when they began trading lines weighted with an all-too-recognizable history:

It can be snatched in a minute

A man can take it with a word

A woman can take it with a scream

Mr. Davis has been working on the opera, with a libretto by Richard Wesley, for years. An earlier version, called simply “Five,” was given its premiere in Newark in 2016 by the opera company Trilogy before it was reworked and renamed.
“With opera it’s like: Here’s a story, I’ll tell you what the story is, and I’m giving it to you in this very raw, emotional way, singing with my heart,” said one of the “Central Park Five” singers.

“I want people to experience the opera so they identify with them, so they think they’re one of the five,” said Mr. Davis, who wrote harrowing music for the interrogation scenes that led to what the young men later said were coerced confessions.

Derrell Acon, the bass-baritone singing the role of Antron McCray, one of the five, organized a conversation series with local community groups to discuss some of the issues raised by the opera. Some have drawn hundreds of people. But he said that ultimately the opera itself was the most powerful communicator.

“With opera it’s like: Here’s a story, I’ll tell you what the story is, and I’m giving it to you in this very raw, emotional way, singing with my heart,” he said. “It’s almost like as audience members you don’t have a choice but to listen. How you deal with it, or what you do next is up to you.”

“When I was in my 20s, man, I wanted to be Miles Davis — but then when you get a little bit older you can still listen to Miles Davis but you understand that that was him, and you have to find your own thing,” Mr. Blanchard said in an interview. “That’s kind of the relationship I’m having with Puccini’s music right now.”

After the success of his first work for Opera Theater of St. Louis — “Champion,” in 2013 — Mr. Blanchard was asked by the company to come back for more. “Fire Shut Up in My Bones,” is based on the memoir of the same title by Charles M. Blow, an Op-Ed columnist for The New York Times. The book centers on Mr. Blow’s upbringing in a segregated town in Louisiana; the scars left by childhood molestation; meditations on masculinity and sexual identity; and efforts to escape cycles of violence.


The opera’s librettist, Kasi Lemmons — a writer, actress and film director who has worked with Mr. Blanchard on several of her films, including “Eve’s Bayou” and the coming “Harriet,” about Harriet Tubman — said that she had been drawn to Mr. Blow’s portrayal of his youth.

“He’s a character who’s very comfortable in his own skin, but the people around him are not comfortable with him,” said Ms. Lemmons, who wrote lines like:

I was once a boy of peculiar grace.

A dangerous existence for a man of my race.

James Robinson, the artistic director in St. Louis, said that the company has tried to tell a more diverse array of stories that bring in new audiences.

“A lot of these are gateway operas, for people who have never seen opera before,” said Mr. Robinson, also the director of a production of “Porgy and Bess” that will open the Metropolitan Opera’s season in September. “The old idea was get them hooked on ‘Madama Butterfly,’ and then you’ll get them for life. I was never a firm believer in that. I thought, Why not try to hook them on something new, more resonant, and then see how they like classic rep?”

Mr. Blanchard said that while he had been raised by an opera-loving father, it was not until recently that he had experienced the power of the art form live.

“Film is great, and it’s been a big part of my life,” said Mr. Blanchard, who has written powerful scores for many films, especially those by Spike Lee. “But sometimes if I’m going to the sixth screening, I’ll say, ‘Hey man, I’m going to go grab some dinner and I’ll come back and do the Q. and A. after the film is done.’ With opera it’s not like that. Every time they do ‘Champion’ I want to go to every performance, because I find something different each time. It’s a living, breathing thing that constantly evolves — and it’s beautiful to watch.”
Black Lives Matter as opera: ‘Blue’

When he was asked to write the libretto of “Blue,” Tazewell Thompson reflected on the talks many black parents have with their children about how to safely survive encounters with the police.

That fear will suffuse the opera:

“Blue” was conceived by Francesca Zambello, the artistic and general director of Glimmerglass, who commissioned it after watching the country convulse in recent years over a series of shootings of unarmed black men by police officers. Washington National Opera, which she also leads, will also perform it at the Kennedy Center next year.

To write the score she enlisted Ms. Tesori, who has written a number of successful musical theater works, including “Fun Home” and “Caroline, or Change,” and an opera, and who recently became one of the first women to have an opera commissioned by the Metropolitan Opera.

“It can only be an opera, this story, for me,” Ms. Tesori said. “Because we are part of this giant system that has become a Greek tragedy, where there is not really a free will. We are riding the wave of hundreds and hundreds of years that have brought us here.”

It was Ms. Tesori who came up with one of the opera’s twists. While Mr. Thompson had originally wanted the father of the African-American family at the center of the opera to be a musician, Mr. Tesori thought it would add complexity and nuance if they made him a police officer.

Mr. Thompson said that his initial response was negative. But he reconsidered, and interviewed African-American police officers about their lives and how they are seen by their families and communities. Ms. Zambello said the opera had grown in depth as they tried to fairly represent different points of view of a fraught subject.

Re: The Central Park Five” is now an opera.

It's a good thing this is happening in this day and age.

Re: The Central Park Five” is now an opera.

It's a good thing this is happening in this day and age.