I had never heard of any of the composers Corigliano mentions. Regards, Len 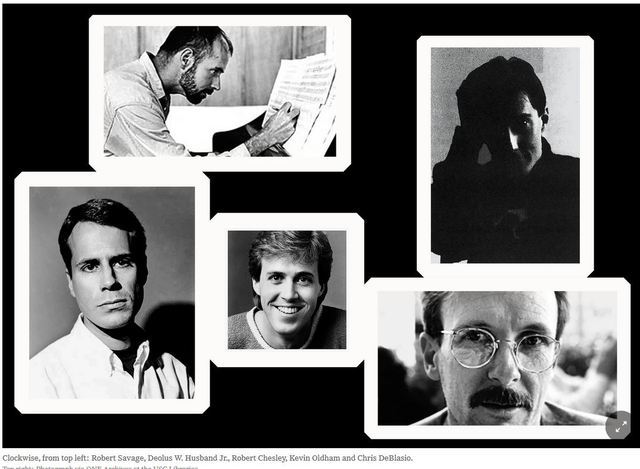 Listen to works by composers who died during the crisis, the focus of a New York Philharmonic concert.

What the composer John Corigliano remembers most about the AIDS crisis is the look of horror in his friends’ faces when they received their diagnoses.

“Everyone had fear,” he said in a recent interview. “You would be watching friends die, and wondering if you were next. And musicians were affected enormously.”

Mr. Corigliano wrote his Symphony No. 1 in tribute to those who were lost to AIDS. The New York Philharmonic is performing the work, which had its premiere in 1990, on Saturday, as part of its season-ending series “Music of Conscience.”

Later that evening, the Philharmonic will present one of its Nightcap concerts, which are meant to offer glimpses into the minds of living composers — in this case, Mr. Corigliano, who has assembled a program including works by five colleagues who died at the height of the AIDS crisis.

“The Philharmonic is playing my First Symphony,” he said, “but it is not a complete evening until you hear the music of the young composers who didn’t make it. The real people who died need a voice, too.”

Many of these artists died without the luxury of the personal estates or foundations that often help to keep composers’ works in the repertory. Instead, their music was preserved largely through the efforts of the Estate Project for Artists with AIDS, which was formed in 1991, and whose records are now housed with the New York Public Library.

Even so, you would be hard pressed to find these five men represented in concert halls today. And they were still growing as artists when their lives were cut short: Unlike instrumental virtuosos, who typically find fame in their teens and 20s, most composers don’t blossom until middle age.

“This is the tragedy,” Mr. Corigliano said. “These guys were mostly in their 30s; they were just beginning to find their voice.”


Mr. Corigliano remembers Chris DeBlasio, a student of his, as “just a very terrific young man who was in love with music.” He was a singer and a composer, and often both at once.

He wrote musical theater and operetta, as well as incidental music — including for “Night Sweat,” a play by Robert Chesley, another composer on this list — and eventually composed “Psalm 41” for an interfaith service on the eve of World AIDS Day in 1992, not long before his death.

“Walt Whitman in 1989” may be Mr. DeBlasio’s most famous song. Mr. Corigliano has a theory about its lyricism: “Most of these composers were writing tonal works,” he said. “Maybe they were desperately trying to speak to people, like they were saying, ‘We want to go down leaving works that people want to hear.’”
Deolus W. Husband Jr., 1959-89
‘The Angel’

Deolus W. Husband Jr. also studied with Mr. Corigliano, as well as with Ludmila Ulehla at the Manhattan School of Music, where he received his doctorate in 1987. During the final years of his education — and after, when he worked with dance companies and, for his last commission, the Harpsichord Music Society — he lived in Upper Manhattan, in an Inwood apartment with his partner, Edwin Alexander, and their three cats.

Few recordings of his works survive. The score for “The Angel,” a setting of William Blake, features experiments in graphic notation, which Mr. Corigliano found adventurous. “He went out of the standard kind of language,” he said. “This is a highly sophisticated piece.”
Robert Savage, 1951-93
‘AIDS Ward Scherzo’

Robert Savage studied with Mr. Corigliano and other important gay composers, including David Del Tredici and Ned Rorem. He was also a pianist, and wrote mainly for that instrument, often performing his own music. Outside the music world, he was a member of the Zen Mountain Monastery in upstate New York; at the Gay Men’s Health Crisis, he ran a Zen meditation group for people with AIDS.

He wrote “AIDS Ward Scherzo” while a patient at St. Vincent’s Hospital in Manhattan. “I wonder if he was taking the word ‘scherzo,’ which means ‘joke,’ to make a point,” Mr. Corigliano said. “It’s extremely lyrical. With people around him dying, he must have found something really beautiful to cling to.”
Robert Chesley, 1943-90
‘Autumn’

Robert Chesley studied music at Reed College in Oregon, but he became better known as a writer. He wrote 10 full-length plays — including “Night Sweat” (1984), regarded as the first play to reckon with the AIDS crisis — and 20 one-acts, as well as short stories, novels and an opera libretto.

Among his nearly four dozen musical works are songs that struck Mr. Corigliano as necessary for the Nightcap concert, even though he never knew Mr. Chesley personally. When he first heard “Autumn,” he said, he thought of the best of Schubert.

“It’s completely simple, but without being simple-minded,” Mr. Corigliano said. “The melody is clear and beautiful, and great art song is made of doing something so ingenious with so few notes.”
Kevin Oldham, 1960-93
Sarabande and Toccata

Kevin Oldham didn’t write music until he received his AIDS diagnosis. He was a Juilliard-trained pianist who had made a name for himself as the soloist in Rachmaninoff’s “Rhapsody on a Theme of Paganini.” But he gave up concertizing when he made the switch to composing.

“It seems to me that whether you stay alive or not seems to be the trivial part,” Mr. Oldham told The New York Times in 1992. “It’s your work itself that must have a life of its own. If I can make sure that my music will continue to have life, that seems to be the more important consideration.”

Being a pianist, Mr. Corigliano said, helped Mr. Oldham write “extremely good music” for the instrument, including the Toccata that will open the Nightcap concert. “He knew how hands work on the keyboard.”

His Concerto for Piano had its premiere in 1991 and was broadcast on national television. The piece didn’t have another hearing until 1993, with the Kansas Symphony Orchestra. By then, Mr. Oldham was hospitalized and diminished. But he left his bed to perform as the soloist in his own concerto, one last time.

Re: The Music Nearly Lost to AIDS


Anthony Tommasini wrote:From its first performance, in 1990, Mr. Corigliano’s Symphony No. 1 brought catharsis and comfort to many listeners, and acclaim to its composer. It also stirred pushback from some critics who found the music too blatant: How many episodes of pummeling percussion, gnashing chords, screeching brass and sorrowfully wafting string melodies can one piece contain? I used to share those reservations.

Yes, and critics and others of refined, superior taste used to put down Tchaikovsky and Mahler for being too emotional - wearing their hearts on their sleeves, as the saying used to go. When I first heard Corigliano's symphony I was in no doubt of its importance, not just as a personal lamentation but as music. I have never bought into the notion that classical music can be too emotional, or understood why some people have such notions. If they're uncomfortable with the open artistic expression of emotions, that's their problem, not the composer's or classical music in general.
John Francis
Top
Post Reply
2 posts • Page 1 of 1

Users browsing this forum: No registered users and 51 guests