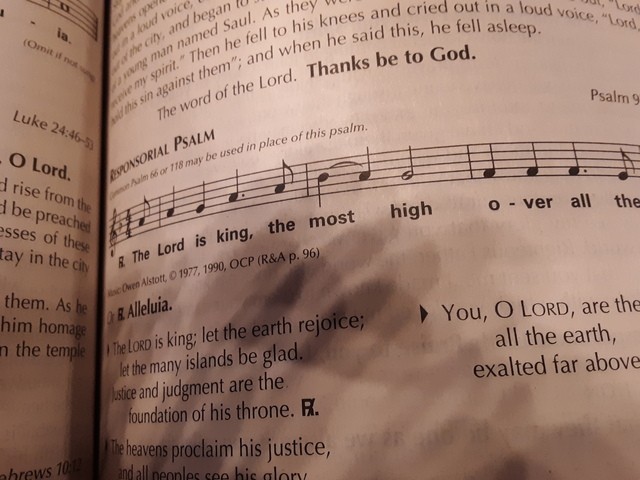 I haven't attended a Roman Catholic Mass in years but our good friends were renewing their marriage vows of 50 years at a church in NJ. There was a lot of the music of Owen Alstott--I never heard of him but found this:

"a prolific composer with a special mastery of sung texts for liturgy. Born and raised in Oregon, he attended high school seminary and the novitiate at Mt. Angel Abbey, a Benedictine monastery in the Willamette Valley. He graduated from college at Mt. Angel with a BA in philosophy and from the School of Theology in 1974. He also attended Willamette University for advanced studies in pipe organ and Marylhurst University where he worked toward a degree in music. Owen served OCP 1976–1992 as music editor, editor of missal and music publications and eventually as publisher. In 1992, he moved to London, England, where he founded a company that publishes and distributes religious education materials.

A gifted song text writer, Owen is a master of adapting, translating and setting texts to music for assemblies and choirs to sing at Mass. He is the composer of the popular Heritage Mass, as well as the chant-style responsorial psalms and Gospel acclamations in Respond & Acclaim, used by more than 10,000 Catholic parishes across the US. He is also the composer of beloved hymns such as “Come, O Holy Spirit,” “Gather Us Together,” “O Holy Mary” and “Wood of the Cross.”

Currently Owen lives in London with his wife, British composer Bernadette Farrell, and their daughter. He was appointed to the OCP Board of Directors in 2015."

The rituals themselves were impressive and made me think of the Verdi La forza from a few weeks ago! Regards, Len