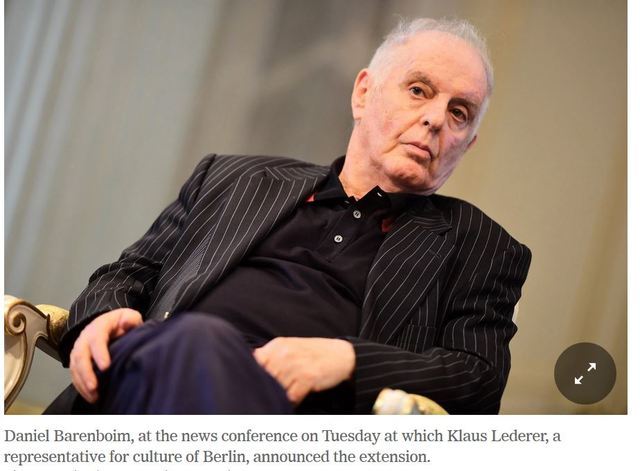 By Thomas Rogers and Alex Marshall

BERLIN — Daniel Barenboim, the venerated musical director of Berlin’s Staatsoper who was accused this year by some of its orchestra members of creating a culture of bullying and a “climate of fear” in the institution, has had his contract extended until 2027.

The decision was announced at a news conference on Tuesday afternoon by Klaus Lederer, Berlin’s highest-ranking representative for culture. Mr. Barenboim’s contract had been set to expire in 2022.

In a statement, Mr. Lederer described Mr. Barenboim as an “exceptional artist,” and said that a third-party investigation initiated by Berlin’s culture ministry this year, had found that “none of the legally relevant accusations could be confirmed.”

Mr. Barenboim, 76, is one of the world’s most admired conductors and a high-profile public figure in the German capital. Alongside his musical leadership of the Staatsoper, the city of Berlin’s premier opera house, and his position as principal conductor of the Staatskappelle, as its orchestra is called, he has founded the West-Eastern Divan Orchestra, a youth ensemble with members from across the Middle East, and a conservatory and a concert hall.

The investigation did find that there was room for improvement in the institution’s working climate, Mr. Lederer said, and as a result, an ombudsperson would be introduced to mediate disputes.

“Today was only the beginning of a process of change” to improve working conditions, he said, adding that “artistic excellence should never excuse a deviation from the rules of careful interaction among people.”

Mr. Lederer also noted that “the large majority of the orchestra” wanted Mr. Barenboim to remain.

Berlin’s culture ministry was unable to immediately clarify the standards for misconduct used by the investigation.

The accusations against the conductor first appeared in February in an article in VAN, an online classical music magazine in which current and former employees described numerous instances of bullying, including temper outbursts and the public berating of staff members. Willi Hilgers, a former timpanist with the Staatsoper, later described to The New York Times being repeatedly singled out by Mr. Barenboim for humiliation in front of the rest of the musicians, leading to “high blood pressure, depression” and a need to use beta blockers and antidepressants before performances.

In an email to The New York Times in February, Mr. Barenboim said he sometimes used a “harsh tone” with employees, but disputed being a “bully” and argued that the accusations had been suspiciously timed to coincide with his contract renegotiations. Speaking at the news conference Tuesday, Mr. Barenboim said, “I am very thankful that the orchestra wants me to continue.”


Leo Siberski, the music director of the Plauen-Zwickau Theater in Germany who played trumpet under Mr. Barenboim from 1992 to 2003, in February accused the conductor of having bullied and humiliated him and other members of his orchestra. In a phone interview on Tuesday, after the announcement, he said that he had spoken with the third-party organization that looked into the allegations.

He said the investigators’ questions were directed at whether incidents crossed legal boundaries, rather than centering on irresponsible behavior. “They were only interested in black-and-white things and of course, this case is not black and white,” he said.

Of Mr. Barenboim’s contract extension, Mr. Siberski said he didn’t care what happened to his former boss anymore. “I said what I said, and I’m very happy I did,” he explained. “It’s Berlin’s business now. Whatever they feel is best for Berlin, is best for them.”

As for Mr. Barenboim, when asked Tuesday what personal reflections he had in the wake of the accusations, he responded only that he would “tell that to the orchestra.”

Susanne Schergaut, a member of the orchestra leadership, said that as a result of the controversy, the conversations in the organization about disagreements had gotten more “intensive.” She pushed back against media reports, saying that “we don’t want our relationship to our boss to be explained to us from the outside.”

Great music-making ain't beanbag. Sometimes, in preparation, a conductor has to raise his/her voice. It's that simple. As to "a climate of fear," well, that exists in every musical organization I've known, but it should not be excessive. Just enough to keep everyone on edge so each musician plays and sings at his/her best. Being an authority figure is not by its very nature a popularity contest.

Going too far (and bullying IS going too far) is another matter entirely, and it should be addressed. Picking on individuals on the orchestra so they have to medicate is beyond the pale, as far as I'm concerned, and not necessary.
Top

I can't believe Barenboim has behaved more badly toward his orchestra than Toscanini did toward the NBC Symphony. And one of the few conductors with a reputation among singers and orchestral players as Mr. Nice Guy is James Levine, who got in trouble for other reasons.
John Francis
Top

John F wrote: ↑
Wed Jun 05, 2019 3:16 pm
I can't believe Barenboim has behaved more badly toward his orchestra than Toscanini did toward the NBC Symphony. And one of the few conductors with a reputation among singers and orchestral players as Mr. Nice Guy is James Levine, who got in trouble for other reasons.

Users browsing this forum: No registered users and 53 guests