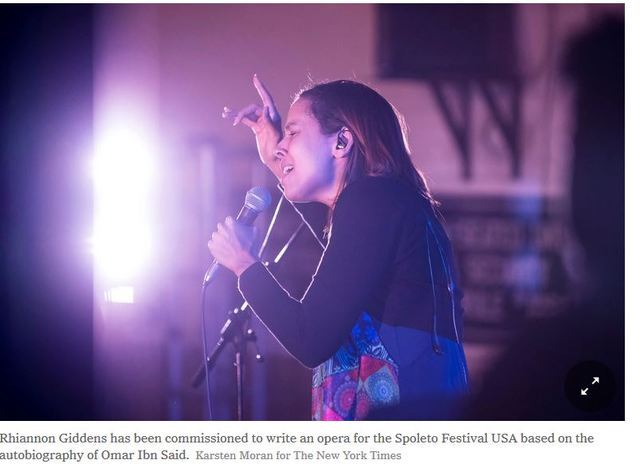 The musical polymath Rhiannon Giddens has mined African-American folk traditions and the deep and varied roots of old-time music as a founding member of the Carolina Chocolate Drops and a successful solo artist. She also studied opera at Oberlin, and hosted a quirky podcast called Aria Code that deconstructed excerpts from Puccini and Verdi.

Now Ms. Giddens is working on a project that promises to unite many of her musical interests: She has been commissioned to write an opera based on the autobiography of Omar Ibn Said, a Muslim-African man who was enslaved and transported to the notorious Gadsden’s Wharf in Charelston, S.C., in 1807. The opera will have its premiere next spring in Charleston at the Spoleto Festival USA, which commissioned it with Carolina Performing Arts.

“My work as a whole is about excavating and shining a light on pieces of history that not only need to be seen and heard, but that can also add to the conversation about what’s going on now,” Ms. Giddens, who has won Grammy Awards and a MacArthur “genius” grant, said in a statement. “This is a story that hasn’t been represented in the operatic world — or in any world.”

Ibn Said’s autobiography was written in 1831, and is the only known extant memoir of a slave that was written in Arabic in America. It recounts his youth and studies in West Africa, his enslavement in Charleston, and his escape, recapture, jailing and eventual sale to a brother of North Carolina’s governor. The Library of Congress recently digitized it and put the manuscript and a trove of related documents on its website.

The new opera, which has not yet been named, will open the Spoleto Festival on May 22, 2020, at the College of Charleston’s Sottile Theater. Nigel Redden, the director of the festival, said in a statement that “this opera gives us a way to look at Charleston in a more comprehensive way.” It will be staged later at Carolina Performing Arts in Chapel Hill, N.C.

The music and libretto are being written by Ms. Giddens; Michael Abels, who composed the score for Jordan Peele’s film “Get Out” and is credited as a co-composer, said that the music would reflect Arabic and African influences. Not all of the casting has been announced, but the role of Ibn Said will be sung by the tenor Jamez McCorkle.