Never heard of this work before? Regards, Len 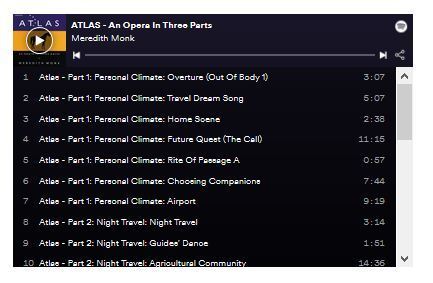 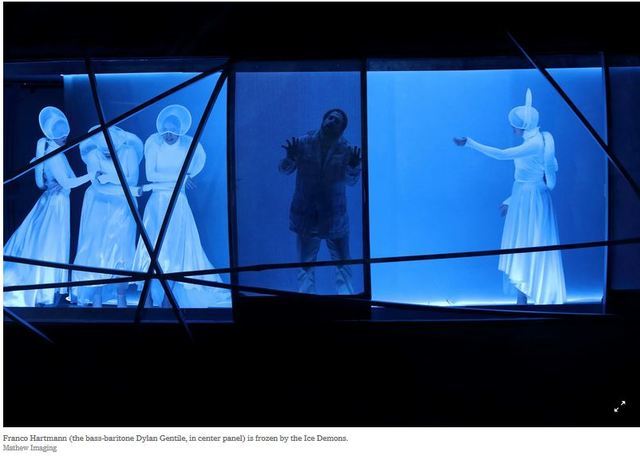 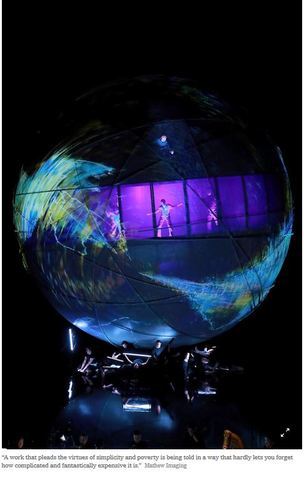 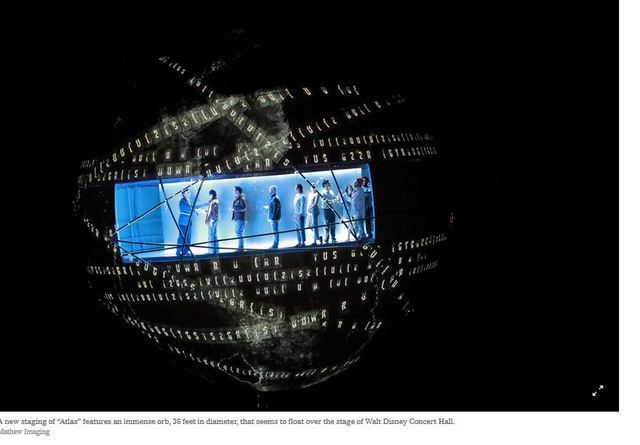 
The Los Angeles Philharmonic brings an operatic masterpiece back to life, with a lavishly glowing sphere.

LOS ANGELES — In some ways, Meredith Monk’s “Atlas,” which the Los Angeles Philharmonic is presenting in a lavishly glowing production through Friday, is as traditional as opera gets.

It has arias, duets, trios, choruses, instrumental interludes. It has dance sequences. It has spectacle — here at Walt Disney Concert Hall, an extraordinary sphere, 36 feet in diameter, seems to float over the stage — and a female protagonist facing adversity. It even has that rarity in contemporary music: earworm tunes, little cells of melody that stick with you for weeks.

What it doesn’t have is words.

At its premiere, at Houston Grand Opera in 1991, “Atlas,” the parable-like tale of a girl’s maturation into an explorer, brought into an old-school opera house for the first time the avant-garde style that Ms. Monk had by then been cultivating for three decades. Starting with luminous solos, she had detached her voice from text, but not from storytelling — instead conveying meaning through tone, speed, rhythm, volume, texture, vowels, wild shrieks, low coos, flowing babble, rapid-fire stutter.

Her endeavors got grander, eventually encompassing a handpicked ensemble of singers and evening-length events that added choreography, film, sets, costumes, character and instrumentation. Progressing in marriages of poetic image and evocative sound, physical gestures mirroring vocal ones, these works were created through intimate collaboration and long processes of improvisation and rehearsal that evoked Buddhist spiritual practice, with Ms. Monk directing, designing and starring.


This made them indelible — and, often, unrepeatable. The group would move on to the next show, usually without having made full notated scores of the last. Even if Ms. Monk had sanctioned it, others couldn’t take on these sprawling, complicated, idiosyncratic pieces.

But as the years went on and Ms. Monk, now 76 and still very much creating, got no younger, the question began to be whispered: Could you do Meredith Monk without Meredith Monk? What, in other words, would happen to such personal work — largely made by and for her and her close circle — after she was gone?

The Philharmonic’s “Atlas,” the opera’s first production since the original in the early 1990s, is the beginning of an answer. Never before has Ms. Monk entrusted — that seems the most appropriate word — to other artists one of the theatrical works she masterminded.


And Yuval Sharon’s new staging, the culmination of this adventurous director’s three-year residency with the orchestra, is both a radical transformation of the piece and an essentially modest conservation of it.

Revived with the assistance of close Monk collaborators but not Ms. Monk herself, the bones, and much of the flesh, remain in an opera that’s somehow simultaneously bustling and meditative, calm at its core as action and music swirl. The main character, loosely based on the world traveler Alexandra David-Néel, leaves a cozily ordinary existence with her parents to see the world with a band of companions. Led by spirit guides, they encounter farmland, ice, forest and desert, trials of courage and premonitions of destruction, before entering an otherworldly realm that Ms. Monk calls The Ringing Place.

The scenes are poetic, almost entirely wordless, and sometimes surreal, but their narrative content is clear; they don’t pose abstract enigmas, like “Einstein on the Beach,” and Mr. Sharon has more or less stuck to them. He has hewed close to Ms. Monk’s original scenario and the original presentation — even the original appearance — of the characters. Danielle Agami’s fluid choreography evokes Ms. Monk’s graceful movement vocabulary.
Sign up for the Louder Newsletter

The results are often properly sensitive, with mystical import, but, given the production’s looming, high-tech set, the action can also sometimes feel inadvertently quaint, a tad cautious. I thought, for example, that Mr. Sharon might reinterpret and modernize the fairy-tale beings that the explorers come across: Hungry Ghost, Ice Demons, Lonely Spirit, Ancient Man. What might a lonely spirit, for example, be in 2019 guise? But these were the same storybook figures they were in 1991.

A few tweaks have been made. Apocalypse is now imagined as an internet-era digital explosion, and the climate crisis is suggested by images of fire-trailing bodies and a temperature-tracking map superimposed on the sphere.

But if this isn’t fully tribute-band Meredith, it’s a faithful cover.

With one overwhelming intervention: that set, the immense orb that’s arresting from the moment you see it through the doors to the auditorium. Serving as projection screen and playing space, with internal corridors visible through shifting panels, it is the work of the designer Es Devlin, best known for light boxes that dominated the stage in Beyoncé and Kanye West stadium shows. The projections, by Luke Halls, conjure globes and deep galaxies, chalk drawings and the surface of the moon.

It’s eye-popping, and its extravagance gives rise to some tension between medium and message: A work that pleads the virtues of simplicity and poverty is being told in a way that hardly lets you forget how complicated and fantastically expensive it is. But it also often matches the mysterious beauty, the combination of sophistication and childlike wonder, of the score; when performers were first revealed within the sphere, I giggled in sheer delight.

Especially at the beginning, there was a sense of the talented cast trying to do the piece “correctly” — an ever-so-slightly stilted quality, a degree of self-consciousness — but that eased as the evening went on and the calligraphic vocal lines began to course with more confidence and personality over the mellow orchestra. In the end, this “Atlas” was an experience a little cooler than the original production — as it comes across on video, at least — but still radiant.

Three performers play the main character as she ages. As the middle Alexandra, the part once played by Ms. Monk, Joanna Lynn-Jacobs has a more slender instrument than her matchless predecessor, but a bright tone and smiling energy. The entire cast sang beautifully — warmly and offhandedly, too, once they forgot to be overly diligent. Ms. Monk’s music should feel like conversation; it did, once this performance really got going.

The L.A. Phil New Music Group, in a subtly expanded orchestration of the piece, played with spacious flexibility, with fullness yet delicacy, under Paolo Bortolameolli. The score’s repeating figurations were propelled forward but never pushed. Near the end, the a cappella section “Earth Seen From Above” was simply exquisite, the ensemble making a softly hovering, kaleidoscopically shifting drone as an image of our planet, wrapped around the sphere, filled in with color.

While the classic recording of “Atlas” ends on that transcendent note, the opera returns its protagonist to earth. Ms. Monk writes, at the end of her description of the action of “Atlas,” that Alexandra, now an old woman back at home, “has fearlessly lived a life inspired by her wish to seek the unknown. She has learned that the unknown dwells in every moment and to honor it is to live life fully.”

Ms. Monk has honored it, too, in the difficult, uncertain and lovely gesture of beginning to pass on her precious body of work.

Users browsing this forum: No registered users and 45 guests