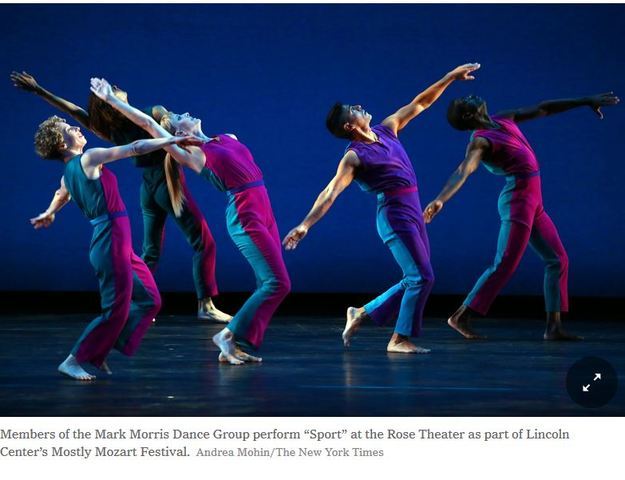 Brian but does any of this deal with the garden-what some might consider one of America's most popular activities-I would call it a sport! Regards, Len

Dancers swim, fish, golf and play tennis to piano pieces by Erik Satie in a light, witty opener to a strong program.

Each of the 21 piano pieces that make up Erik Satie’s “Sports et Divertissements” has a title defining its subject: fishing, racing, tennis, golf. The program for “Sport,” Mark Morris’s new dance to the Satie score, doesn’t reproduce those titles. For this dance, such labels would be redundant.

The work, which had its world premiere at the Rose Theater on Wednesday, the opening night of this year’s Mostly Mozart Festival at Lincoln Center, is one of Mr. Morris’s droll pantomime pieces. In each section, the dancers very clearly act out the corresponding title (though not, it seems, Satie’s accompanying prose poems). Now they’re swimming; now they’re playing blind man’s buff. To identify what’s going on takes almost no time at all.

Very little time is available, since most of the pieces (crisply played by Colin Fowler) last only 20 or 30 seconds, none longer than a minute and a half. Brevity is the soul of wit here, but also a recurring limit, as time keeps running out.

Mr. Morris contributes some continuity with choreography between the pieces, yet each section essentially stands alone. You see how a sheet becomes a sail, or a waterslide in which a dancer is dragged. You notice how four men contort into an octopus. You smile.


In a few of the longer sections, like the yachting one and the tango parody, Mr. Morris has room to suggest a more complex drama, hints of life surrounding the sport. Most of the dance, though, bets everything on cheeky plainness — bobsledding represented by nothing more than dancers stretched out supine on the floor, rocking from side to side.

As a light opener, it works, especially since the rest of program is strong and contrastive. Where “Sport” is cartoon-simple and easy to read, “Empire Garden” (2009) is forbiddingly complex, communicating in a language that’s esoteric and ambiguous.

The score is Charles Ives’s Trio for Violin, Cello and Piano. Mr. Fowler, the violinist Georgy Valtchev and the cellist Wolfram Koessel sounded like more than a trio, for this is music that goes in many directions at once, interrupting itself with collages of quotations from folk songs and other sources.

Elizabeth Kurtzman’s bright marching band costumes (“Sgt. Pepper”-like well before Mr. Morris made “Pepperland” in 2017) help set a tone of false small-town cheer, but there’s a sinister portent to the wiggly fingers and shimmying shoulders, a shadow of something wicked in the carnival. A recurring figure could be a preacher, a dictator, a con man or a band conductor. The open-mouthed bases of a human fountain fall off and roll, mouths still open. Mr. Morris doesn’t just match the music’s intricate structure; he lets it work on his imagination. No one but he would visualize the music this way.

That’s true as well of his 2001 masterwork, “V,” set to Schumann’s Piano Quintet in E flat, vibrantly played by Mr. Fowler and the American String Quartet. This is one of Mr. Morris’s dances of classical order, with a patience-testing fidelity to structural repetition that some find overly schematic.


But watch what Mr. Morris does with the funereal march section. Watch how dancers crawl across the stage, making the stately rhythm of the march look halting and difficult. Watch how, when each crosses a line of dancers crawling in the opposite direction, he or she rises erect, transfigured, only to return crawling later. Watch that, and you’ll never hear the music the same way again.

The only piece I see here is "Empire Garden." I have not heard the Ives and don't know it, but I doubt that Ives's music has anything to do with gardening per se. All in all, this doesn't seem to have much to do with Mozart, either!

The only piece I see here is "Empire Garden." I have not heard the Ives and don't know it, but I doubt that Ives's music has anything to do with gardening per se. All in all, this doesn't seem to have much to do with Mozart, either!

Users browsing this forum: No registered users and 30 guests