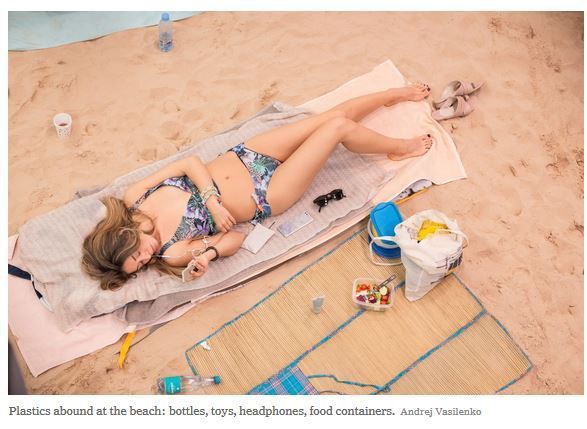 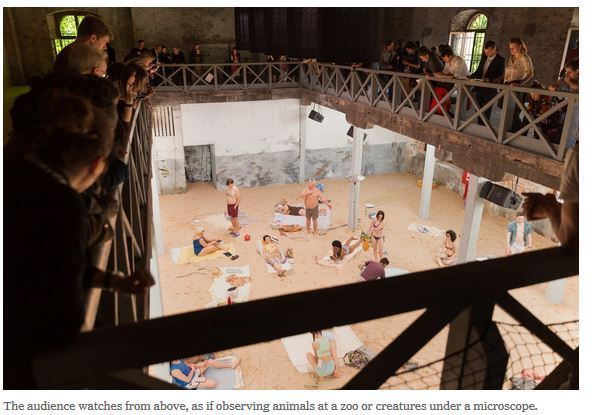 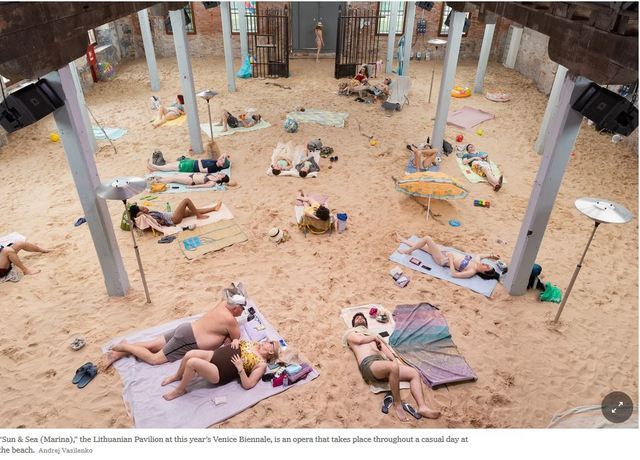 VENICE — When “Sun & Sea (Marina)” won this year’s Golden Lion, the top prize of the Venice Biennale, it was measured against works of predominantly visual art.

But “Sun & Sea” is an opera — an excellent one that, in the event of a similar contest among new operas from around the world, could still come out on top. Within a single hour of dangerously gentle melodies, it manages to animate a panoramic cast of characters whose stories coalesce into a portrait of an apocalyptic climate crisis that goes down as easily as a trip to the beach.

What’s less easy, however, is getting in to see it. The opera, Lithuania’s contribution to the Biennale, which is on view here through Oct. 31, may be a prizewinning hit. But it’s also expensive to mount, and was only recently made available two days a week, instead of one, after a passionate fund-raising effort. Even with added showings, the line to enter is long, and slow-moving.


When visitors finally do arrive inside the industrial complex where “Sun & Sea” takes place, they walk upstairs to the mezzanine of a warehouse where, below, they see a brightly lit sandy beach, populated by people to be observed as if they were in a museum’s diorama of the Anthropocene.


In this setting, the opera’s creators — the filmmaker and director Rugile Barzdziukaite, the writer Vaiva Grainyte and the artist and composer Lina Lapelyte — have found a venue for the kind of banality that reveals everything and nothing about our moment, as they did with a superstore in “Have a Good Day!,” which ran at the Prototype Festival in New York in 2014. Like that earlier effort, “Sun & Sea” avoids political didacticism with poetic obliqueness, and a haunting simplicity that insinuates itself into your memory and, possibly, your opinions.

This is a remarkable achievement for a work that, put bluntly, is about climate change and the ways humans have brought about a crisis they can’t fathom. Political art comes in all shapes and sizes, from agitprop to ambiguous elegy; “Sun & Sea” lands at neither end of the spectrum. By presenting an overwhelming dose of contemporary leisure, and all that it implies, the opera is more similar to the old-fashioned parenting trick of forcing a child caught smoking to finish the entire pack as punishment.

To start, “Sun & Sea” invites you to consider the beach itself, a fragile natural phenomenon that has now largely been engineered by humans to offer enjoyment that, in some cases, is seen as worth flying around the world for. As such, this beach is a mostly bourgeois scene, with characters like the Wealthy Mommy, the Workaholic and a long-distance couple who commute by plane.


They and the other characters, a cast of roughly 20 singers and extras, take in the sea breeze and sunlight, occasionally breaking into song about things big (globalization, ecological disaster) and small (flight times, sunscreen). You see them scrolling on their phones, playing cards and filling in sudoku puzzles. One man lies on his back, waving a hand-held spinning fan over his broad, hairy chest. There is a very good dog that mostly naps, and a very bad one that mostly yaps.

Their relaxing day — set to the lulling, soft electronics of Ms. Lapelyte’s score, which hovers somewhere between the simplicity of pop and the serenity of minimalism — sounds wonderful until it isn’t. “Not a single climatologist predicted a scenario like this,” one of the young men in the long-distance relationship (Marco Cisco) sings as a non sequitur in an otherwise pleasant number about vacation. “Maybe someone had a feeling — perhaps the bull?”

The opera often twists its metaphorical knife like this, teasing out horrifying repercussions from beautiful images. Most dangerous are the choruses, gorgeous harmonies that warn about riptides and undertows. And “Siren’s Aria,” a mostly unaccompanied solo sung by Ana Carolina de Paula Oliveira, uses seductive purity and heavenly spun melody for a story about a boyfriend drowning in the ocean.

Wealthy Mommy (Kalliopi Petrou) sings brightly about her 8-year-old son, bragging that he has swum in several of the world’s seas and visited two of its “great oceans.” Her family travels constantly, she explains from her lounge chair covered with a leopard-print towel; they’ve even sipped piña coladas in the waters of the Great Barrier Reef. (She, of course, is also the owner of the loud dog.) Their lifestyle is made possible by her husband, the Workaholic — Bruce Boreham, with a conversational bass that wearily slurs against a restless beat.

The libretto becomes more poetic as the afternoon continues, perhaps because these people have the luxury of being rendered a little delirious by the sun, like becoming sick after an indulgent dinner. One young man, lying down with his shirt open, recounts a fever dream that comes to a nightmarish swell — the loudest and most explicitly disturbing moment of the score. Another, wearing headphones, lets his mind wander to thoughts about how the modern world has made it possible for exotic produce to travel thousands of miles to your grocery store.

“Chanson of Admiration,” sung by Nabila Dandara, has a sense of wonder in its music and lyrics describing the ocean: “Jellyfish dance along in pairs — with emerald-colored bags, bottles and red bottle caps. O, the sea never had so much color!” Look around, and you’ll notice the sand isn’t much different. There are plastic bottles and toys everywhere, and a small inflatable swimming pool mere feet from the water. Fresh fruit is held in plastic storage containers. You know someone will accidentally leave behind their plastic headphones.

And there’s nothing particularly exaggerated about this beach; the one nearby at Lido would probably look the same. When, in the slyly harmonious finale, the chorus describes botanical gardens flourishing in the sea, covering their bodies with “a slippery green fleece,” the image doesn’t seem different from the news I had just seen in France of an unusual and unwieldy bloom of toxic algae on the coast of Brittany.

That’s what makes “Sun & Sea” so difficult to shake, aside from its honeyed earworms. It’s nauseating enough to take in its depiction of a world ending with quiet complacency. But then you have to walk back outside to Venice, where cruise ships drop off and pick up thousands of tourists, and countless shops sell cheaply made souvenirs that can be as insidiously forgettable as a day of leisure.