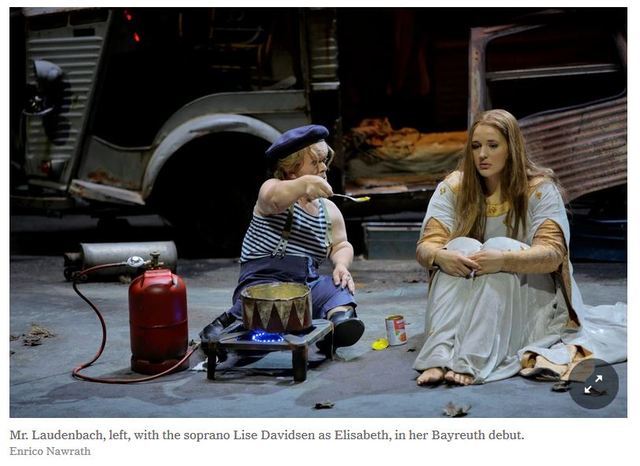 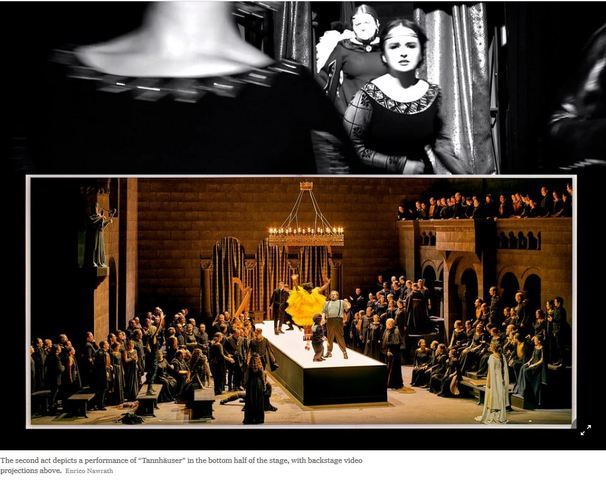 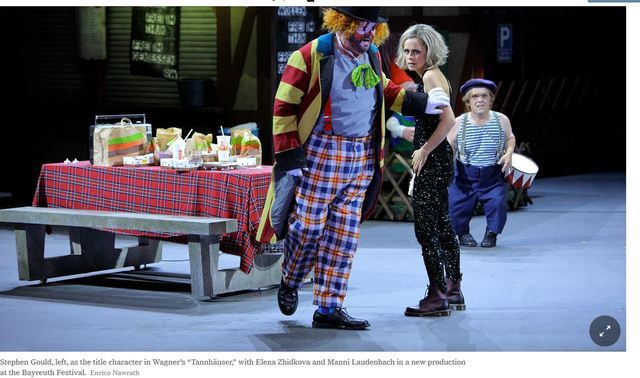 BAYREUTH, Germany — The Wartburg castle, so central to Wagner’s “Tannhäuser” that it’s part of the opera’s full title, makes an appearance only briefly in Tobias Kratzer’s new production, which opened the Bayreuth Festival here on Thursday. At the beginning of the overture, a video projected onstage shows the medieval fortress in sweeping drone footage fit for a tourism commercial. Then it’s gone.

Instead, the camera’s focus turns downward, to a scrappy Citroën van driven by a merry band of anarchists. There’s Venus, their leader, at the wheel, looking crazed and sultry in a sparkling black unitard. With her are a raggedy clown, a drum-playing dwarf and a drag queen named Le Gateau Chocolat.

This is “Tannhäuser,” I swear. It’s just that in Mr. Kratzer’s rollicking production — intelligent and surprisingly wrenching, though not quite fully formed — the Venusberg is not the libretto’s mythical pleasure realm so much as a lifestyle of young, brash artistry. That pathetic clown, it turns out, is Tannhäuser, joining Venus and company to litter the German countryside with signs saying: “FREELY WILLING. FREELY DOING. FREELY ENJOYING.”

Those words are Wagner’s, from his bad-boy days as a revolutionary in Dresden, where “Tannhäuser” had its premiere in 1845. He revised the opera in 1861 for a production in Paris, incorporating the groundbreaking musical language he used in “Tristan und Isolde” and patching some of the plot’s leaks. It wasn’t perfect, but it was better; Wagner had aspirations to continue revising it for the rest of his life.

Today, you’re likely to come across the Paris version, or some hybrid. But here, Mr. Kratzer has opted for the original Dresden score — because, he said in a program book interview, it’s truer to Wagner’s revolutionary spirit.

Regardless of how persuasive that argument may be, there was little case for it in the orchestra pit, where Valery Gergiev was making his Bayreuth debut. Throughout the evening, his interpretation of the music was unreliably thoughtful, and at times lackadaisical. The overture began promisingly, sedate and serene — with the Pilgrim’s Chorus theme, which returns near the end in the brasses, played over quiet, downward chromatic scales in the strings. But instead of a light, buzzing sound from the violins, he drew something heavier, jabbing and overly present.

The baked-in filmic qualities of the overture provided a fitting soundtrack for the movie that is the foundation of Mr. Kratzer’s production. (Manuel Braun is the video director.) Venus’s Citroën arrives at a Burger King, where her gang scams the restaurant out of a free meal. When they leave, they are cut off by a police officer on foot. Out of desperation, Venus runs him over and kills him — a sobering end to all the fun, and the beginning of Tannhäuser’s doubts about her way of life.

As the film ends and the curtain rises, we see the Citroën pulled over at a roadside food stand with the Disneyland look of a faded fairy-tale cottage. Here, Tannhäuser (the mighty tenor Stephen Gould, with ever-increasing despair) sings his ode to Venus but eventually begins to beg for escape. She can be awfully persuasive, though, especially as performed by the charismatic Elena Zhidkova. (A late replacement for Ekaterina Gubanova, she showed no signs of insufficient rehearsal time.)

So Tannhäuser gets back in the van, until he can’t take it anymore and throws himself out the door and onto the highway. A cyclist — in the role traditionally presented as a shepherd boy but here never clearly defined — rouses him and says to listen as pilgrims pass through on their way to Rome.

That city, and the pope within it, are treated metaphorically, changing with each act. In this case, “Rome” is the Bayreuth Festival Theater, revealed in miniature atop a hill toward the back of the stage. The “pilgrims” are a mirror image of the audience: making their way to Wagner’s theater in tuxedos, gowns and formal lederhosen, fanning themselves with program books. (Outside on Thursday, the temperature was nearing 100 degrees Fahrenheit.)

The theater, in a somewhat confusing turn, is also a stand-in for the Wartburg; its minnesingers — Tannhäuser’s fellow knight-troubadours — approach him wearing the lanyards you might see off-duty singers wearing around the festival grounds. Tannhäuser, it turns out, is a cast member of “Tannhäuser,” returning at last to his colleagues.


This sets up a play-within-a-play premise for Act II, a “Tannhäuser” by way of “Kiss Me, Kate.” The lower half of the stage is a traditional set for the opera’s singing contest; the upper half is a screen showing film of life backstage, adding both comedy (a lot of it) and moments of psychological clarity. We see, for example, that Elisabeth — Tannhäuser’s saintly love, sung by the soprano Lise Davidsen in an astonishingly mature Bayreuth debut at just 32 — is faithful, but not a simple archetype. She is far more complicated, her devotion to Tannhäuser almost pathological and her behavior self-destructive.

When she returns in Act III — years after Tannhäuser leaves to seek redemption in “Rome,” now meaning jail because he took the fall for the officer’s death at Burger King — Ms. Davidsen’s Elisabeth is in a downward spiral. She finds the dwarf, Oskar (Manni Laudenbach), who is living out of the decrepit Citroën, and joins him in waiting for Tannhäuser to return alongside other newly released prisoners.

He doesn’t, and her prayer that follows, which has heavenly purity on a recent Decca recording, is here more forlorn, with a dark turn to a shocking sex scene with the knight Wolfram (Markus Eiche, who sculpted a tender “Song to the Evening Star”). She forces him to dress like Tannhäuser the clown, then appears to die, though it’s not clear how or when.

That’s because Mr. Kratzer’s production begins to muddle in the third act, not always aligning with the libretto as he aspires to illustrate the divergent paths artists’ lives can follow. Oskar is homeless; Le Gateau Chocolat, we learn from a luxury billboard, sells out; Venus never changes; and Tannhäuser, back from jail, has nothing to return to. He dies — maybe — holding Elisabeth’s body and imagining the road trip they would have shared, smiling and riding into the sunset, if only he hadn’t met Venus.

Some confusion aside, Mr. Kratzer’s reading of the opera is both novel and clever. I left the theater thinking of Wahnfried, Wagner’s house in the center of Bayreuth, where an exhibition is celebrating the 100th anniversary of the birth of Wolfgang Wagner, the composer’s grandson, who is credited with establishing the “Bayreuth Workshop” model of the festival today. The idea is that our interpretations of Wagner are ever-evolving; that’s why directors are hired for several years, to tweak their productions with each revival.

Even for Wagner, “Tannhäuser” was always a work in process; for Mr. Kratzer, returning over the next few years, it will be, too, with the potential to keep refining and improving. The festival, for its part, can help by hiring a new conductor.

The festival, for its part, can help by hiring a new conductor.

If that isn't the ultimate throwaway line, I don't know what is. Gergiev disappoints again.

I'll never see this production. Even if I wanted to, and I don't, I'm unable to travel to Bayreuth at this point in my life, and the 100 degree temperature would surely do me in. Saharan heat in Europe, headed for Greenland where more ice will melt!

It sounds truly bizarre. Bring back the horned helmets!

Absolutely priceless!! I guess the horned helmets are a little close to the bone in this day and age of aggressive feminism!! But, in any case, this production sounds dreadful but I'm not surprised. Look at me; look at me!! Read Christopher Lasch: "The Culture of Narcissism: American Life in the Age of Diminishing Expectations" (1979 and terribly prescient). And, of course, it's worldwide now. Ergo, regietheater.

If I see anything with a Peter Sellars moniker I think Wilson from "Castaway" and kryptonite from Superman.
Top

Wagners's granddaughter, Friedelind, whom we knew, drove a Citroen. So maybe at least she would approve?!
Donald Isler
Top

A venerable Opera Australia production of Rigoletto has him and Gilda turning up at Sparafucile's place in a Fiat.
Top

Absolutely priceless!! I guess the horned helmets are a little close to the bone in this day and age of aggressive feminism!! But, in any case, this production sounds dreadful but I'm not surprised. Look at me; look at me!! Read Christopher Lasch: "The Culture of Narcissism: American Life in the Age of Diminishing Expectations" (1979 and terribly prescient). And, of course, it's worldwide now. Ergo, regietheater.

If I see anything with a Peter Sellars moniker I think Wilson from "Castaway" and kryptonite from Superman.

Yes, it's all so tiresome. The director's ego as key to the production.
Mind you, I took a bit of a liberty with horned helmets, which belong to the Ring rather than Tannhauser.
Top

I liked the imagery, which is Wagnerian after all!!
Top

barney wrote: ↑
Sun Jul 28, 2019 5:43 pm
A venerable Opera Australia production of Rigoletto has him and Gilda turning up at Sparafucile's place in a Fiat.

Barney the Met had a Cadillac. Regards, Len

"Neon lights flicker in the background when the storm kicks up. And after poor Gilda is killed, her body is not put in a sack to be dragged to the river but dumped in the trunk of a fantailed Cadillac." 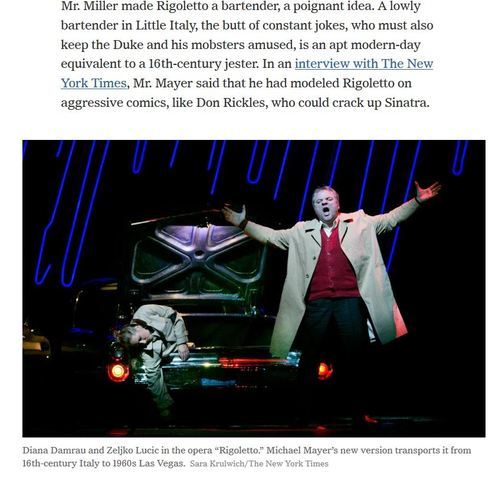 Many a Gilda would not fit in the trunk of a small Fiat. A Cadillac is a much better idea.

He's conducted quite a lot of Wagner at the Met as well as St. Petersburg, and the complete Ring here during the Lincoln Center Festival. That's probably why he was invited to Bayreuth. The performances I've heard were certainly not inadequate but nothing special either. It's not his Wagner that Gergiev is noted for.

From what I've seen and heard on YouTube, Lise Davidsen is the real thing - not a Brünnhilde but what used to be called a jugendlich dramatischer soprano, or spinto in Italian. Elisabeth is perfect for her at this stage, but whether her singing and acting develop the dramatic intensity and complexity of other memorable sopranos of the type such as Leonie Rysanek (not to mention Maria Callas) we'll have to wait and see.
John Francis
Top
Post Reply
16 posts • Page 1 of 1