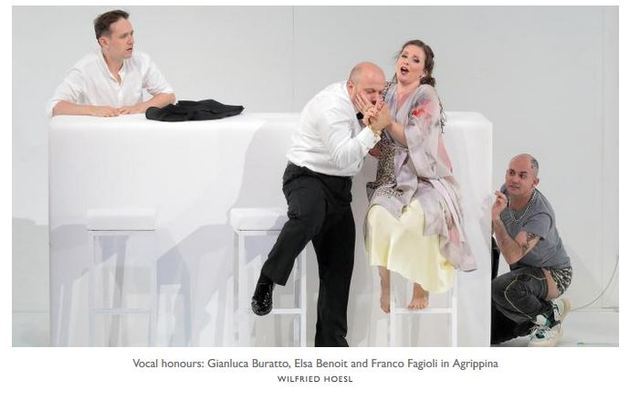 
At the time of his hugely successful staging of Handel’s dramatic oratorio Saul at Glyndebourne in 2015, the Australian director Barrie Kosky, then working for a British company for the first time, opined that there was more theatre in Handel’s English works written for concert presentation than in his Italian operas made to be staged. On the strength of his new production of Agrippina at the Prinzregententheater, in Munich — it comes to Covent Garden in September, with Joyce DiDonato in the title role and Lucy Crowe as Poppea — he has changed his mind.

After his dizzyingly madcap response to Shostakovich’s The Nose at the Royal Opera House, and a transfer of his snappy, stylised Carmen from Oper Frankfurt, this Agrippina ranks with his finest work. It’s a taut drama of political intrigue and amorous shenanigans, in which mighty men — Claudius, Nero and his rival, Otho (Ottone) — are exposed as sexually incontinent and corrupt by two astute and guileful women: Agrippina with her deceptions and Poppea with her physical charms. Agrippina sees her son Nero ascend to the imperial throne, while Poppea, chased by all three leading men, gets to marry the one of her choice.

Agrippina premiered in Venice in the Carnival season of 1709, and the ironic, action-packed text by Vincenzo Grimani is the finest Italian libretto Handel ever set. Yet partly because of the subject matter — great people behaving badly — and partly because much of the action proceeds in long passages of Italian recitative, the composer never revived it. He did, however, recycle key arias for his first London opera, Rinaldo, and motifs recur from this youthful work, completed when he was 24, until the end of his creative life. He was never one to waste a good tune.

What makes Agrippina such gripping theatre — as Kosky stages it, anyway, using two of his regular designers, Rebecca Ringst (sets) and Klaus Bruns (costumes) — is its portraits of two contrasting women, the scheming matron-empress and the seductive Poppea. The latter is the first of Handel’s sex-kitten types, of which he made a speciality in his London operas and English dramas. (Cleopatra in Giulio Cesare and Semele are the best known.)

Agrippina, played by the British mezzo Alice Coote with a steely determination that occasionally hardens her tone, has a sequence of great arias and scenes. None is more riveting here than her quasi-arioso solo Pensieri, voi mi tormentate (“Thoughts, you torment me”), in which she calls on the gods to help her son to the throne, yet fears her plots against her husband and Ottone will be discovered.

Kosky gets a commanding performance from Coote, and Bruns power-dresses her in regal couture — lots of gold and blue — before she puts on masculine attire for her beautifully sung final aria of reconciliation with Claudio, Se vuoi pace (“If you want peace”). The role should be an excellent fit for DiDonato.

Otherwise, the vocal honours were shared equally between Iestyn Davies’s raptly sung Ottone, two of whose arias are showstoppers to match any of the great lovers’ laments in the mature London operas; Elsa Benoit’s sexy, bright-toned Poppea; and Gianluca Buratto’s sonorous Claudio. The Italian bass is too young for this dirty-old-man role, but he plays up the comedy: one of the opera’s best jokes is his entrance at the moment Agrippina is crowning her son, believing her husband drowned at sea.

Ringst’s flexible set is abstract-modernist, with a central staircase that recalls the Frankfurt/RO Carmen, but doesn’t inhibit the performers. Franco Fagioli’s flamboyant Nerone, a huge hit with the local audience, is dressed as a tattooed punk until his triumph, when he puts on a camp floral dinner jacket. He dispatches his final bravura aria with panache, if not particularly alluring tone. Ivor Bolton conducts in Munich — he has been the go-to Handelian at this address for 30 years, and keeps the orchestra on its toes — but will be replaced in London by the rising Russian star Maxim Emelyanychev.

At the other end of Bavaria, the Bayreuth festival has just revived Kosky’s richly detailed and researched staging of Wagner’s Die Meistersinger von Nürnberg, which didn’t convince me two years ago. Camilla Nylund is the new Eva. In Act I, Eva is supposed to represent Cosima, the mistress of Wahnfried, with Sachs (a great performance by Michael Volle) as Wagner, Pogner as Liszt and the town scribe, Beckmesser (Johannes Martin Kränzle, none better today), as the Jewish conductor Hermann Levi.

It’s fascinating, if contrived, but the staging really loses its way in Act II, when the action moves to the Nuremberg trials and ends with a grotesque Nazi caricature of a Jew filling the stage as Beckmesser is beaten up by the locals.

This year’s new production is Tannhäuser, staged by the great white hope of German opera directors, Tobias Kratzer, whose Fidelio comes to Covent Garden next season. One hopes it will be a more sober affair than his Tannhäuser, staged here as an entertaining, laugh-out-loud romp in which a troupe of circus acts — Tannhäuser is the clown, Venus the acrobat, accompanied by a black drag queen and a dwarf — invade a more or less traditional staging of Act II, in which Venus kidnaps one of the pages and scowls at her “rival”, Elisabeth, during the Song Contest.

Kratzer’s anarchic ideas are as much about Bayreuth as they are about Tannhäuser, drawing boos from the traditionalists. Valery Gergiev, conducting just for summer, doesn’t escape them for what sounded an under-rehearsed account of the score.

Stephen Gould’s rugged, effortful hero is a known quantity, but Lise Davidsen took the Festspielhaus by storm with her big, bright, somewhat metallic soprano. She will be Fidelio in London, and one hopes Kratzer will get her to deliver the text with greater poetic force than she did here.