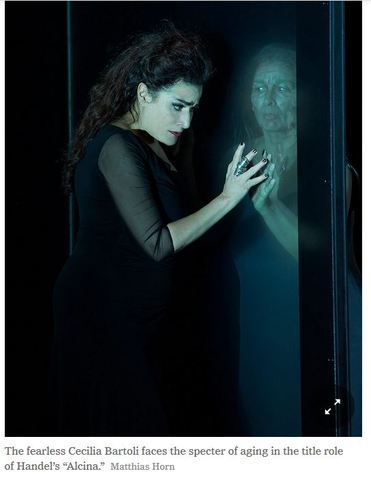 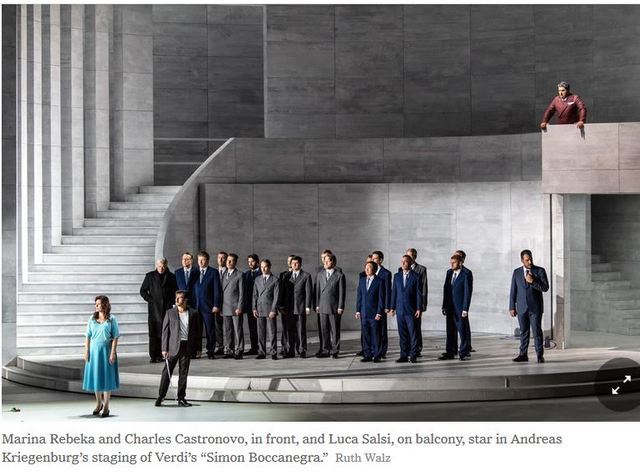 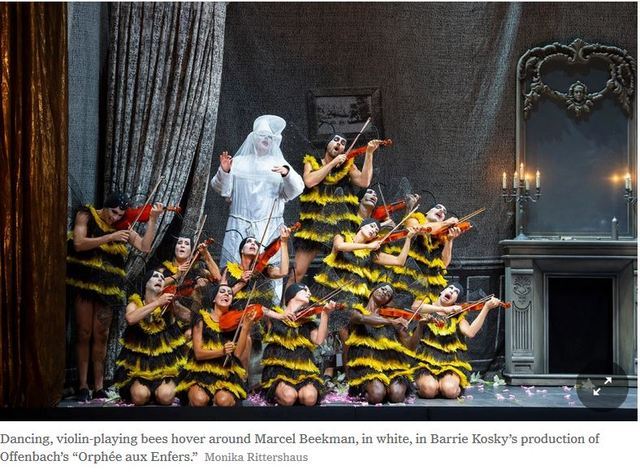 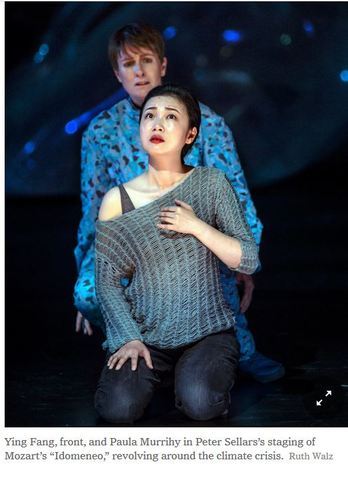 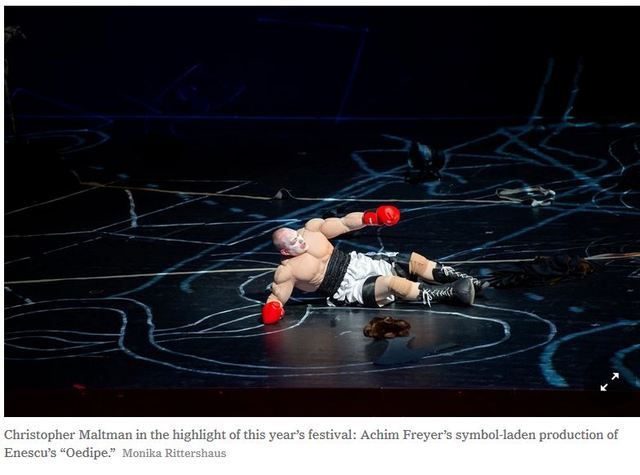 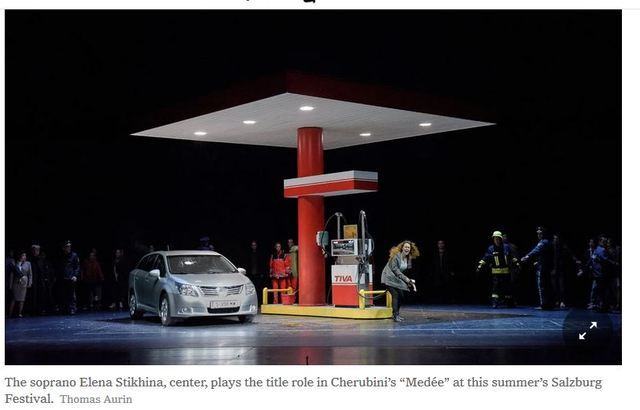 Six excellent new opera productions this year will be hard to top in next summer’s centennial festival.

SALZBURG, Austria — Next summer, the Salzburg Festival, the largest and most important annual event in classical music, turns 100.

This is a big deal, and will be celebrated as such — with exhibitions in this idyllic city and elsewhere, symposiums, and opera, concert and drama productions elaborate enough to require a bump in the already generous budget. (The 2020 allocation is north of 66 million euros, or $73 million, for a six-week festival.)

“There’s an unbelievable history,” Markus Hinterhäuser, the festival’s artistic director since 2017, said in an interview here on Monday. “From the founders — from Strauss and Reinhardt — to our time: It’s a panorama.”

But if a centennial is about as major a milestone as an institution gets — particularly an institution as obsessed with its illustrious past as this one — Salzburg’s leaders also want you to know: It’s not too big of a deal.


“We’re not going to communicate,” Mr. Hinterhäuser added, “that this 100 years makes it for the first time possible to have a wonderful Salzburg Festival.”

Helga Rabl-Stadler, the festival’s president, who was sitting beside him, agreed: “I would also say our program this year is as good as any in a hundred years.”

Six days in Salzburg had me agreeing with her that this year’s installment will be hard to top — and wildly applauding the festival’s decision, announced in May, to extend Mr. Hinterhäuser’s contract through 2026.

These six days let me see this year’s six new opera productions, spread over three theaters. I would return for an encore of any of them. (Ask anyone who’s been to the festival, and you’ll quickly learn that’s decidedly not the norm.)

Among the six is one extraordinary show (Handel’s “Alcina,” starring a fearless Cecilia Bartoli), and another that — because of the rarity and difficulty of the opera at hand — I found even more than extraordinary.

I’m talking about Achim Freyer’s staging of Enescu’s “Oedipe,” a solemn but seething adaptation of the Oedipus myth that its composer worked on in fits and starts from 1910 to 1931. The work doesn’t stint on passionate drama, but it also has an antiqued, bronzed, sometimes delicately flute-fluttering and strings-pricking sound, as if the score had been unearthed from long ago.


At the Felsenreitschule, a theater built into a mountain that was once a riding school and now really does evoke an ancient rock artifact, “Oedipe” — with final performances Saturday and Aug. 24 — is a perfect fit for Mr. Freyer’s surreal, symbol-laden, carefully childlike style.

In the prologue, a baby — an adult dancer with a baby’s huge, roughly drawn head and bulging arms and legs — emerges, kicking its way to life and haltingly learning to walk. This is Oedipus, who we then see (in the form of the vehement yet eloquent baritone Christopher Maltman) as an arrogant cartoon bodybuilder, the infant’s bulges poignantly echoed in exaggerated muscles and oversize boxing shorts.


After the grim unfolding of his tragedy, his self-blinding and his exile with his daughter, the story comes full circle: The destroyed old man becomes a baby again, hugging to his chest a model house — the safety and love he longed for and lost — and curls in a ball as waves of music wash over. (Ingo Metzmacher expertly unleashed the Vienna Philharmonic’s full radiance.)


Our relationship to our past and future selves is also the subject of Damiano Michieletto’s production of “Alcina,” a holdover from this spring’s Salzburg Whitsun Festival, which has flourished in recent years under Ms. Bartoli’s leadership.

The opera is staged in a kind of Italian Art Deco hotel, where you can check in but might never be able to leave. Alcina, the sorceress who entraps soldiers in her pleasure garden, is here haunted by aging; her elderly double wanders the set.

The opening moments establish both her fears (Ms. Bartoli, at 53, looks doubtfully at her figure in the mirror when she enters) and her power (with mere hand gestures she makes lights and set do her bidding). Her aide, Morgana, is not the perky ingénue of most productions, but, as played with touchingly quivering energy by Sandrine Piau, is, like Alcina, a woman of a certain age, and therefore a certain anxiety.

Riding the music with gusto and unafraid to take risks, Ms. Bartoli’s voice sometimes tightens in fast, florid passages, but in relaxed music her tone is still warm and fresh; for floating notes she’s equaled by the countertenor Philippe Jaroussky, playing one of the men in her magical clutches.

Gianluca Capuano and the Les Musiciens du Prince-Monaco blaze through the score, but linger sensitively in the slow arias. The happy ending — lovers are reunited, Alcina’s prisoners are freed — here comes at the very visible expense of a woman’s death.

That happens to be the same juxtaposition as at the end of Peter Sellars’s production of Mozart’s “Idomeneo”: The final message is that the kids are all right — a new generation must take over for an ineffectual, morally bankrupt older one — but Electra’s dead body onstage sounds a note of darkness.


The show is Mr. Sellars’s usual well-meaning mélange of manifesto-like gestures. The turbulent coastal storms that motivate the libretto are here talismans of climate change; George Tsypin’s set is an installation of huge objects — some like sea creatures, some vaguely like consumer goods — in clear (and, according to the festival, biodegradable) plastic; the final ballet is a ceremonial dance by two performers who come from Pacific islands threatened by rising seas; teenage climate activists are quoted in the program book.

Emerging from all this was a fairly straightforward, spare, contemporary-dress enactment of “Idomeneo,” the action characterized by the soulful gazes and tender body contact that Mr. Sellars adores. The acting was committed but the singing was not of the highest standard, with only Ying Fang, as Ilia, sounding full, rounded and flexible.

But Teodor Currentzis led the Freiburg Baroque Orchestra with an irresistible intensity that alone would bring me back; Mr. Hinterhäuser has made Mr. Currentzis the podium star of Salzburg, and the audience greeted him with a roar at his bow.

Also straightforward, spare and contemporary-dress was Andreas Kriegenburg’s staging of Verdi’s “Simon Boccanegra.” Mr. Kriegenburg didn’t show off a daring new vision of the opera, and I don’t mean that as condemnation. Set in a modern architectural folly of looming, curved travertine walls — rather than the libretto’s 14th-century Genoa — Mr. Kriegenburg’s “Boccanegra” was clear and levelheaded, the action focused, Valery Gergiev’s conducting mellow yet dynamic, the singing excellent.


The staging highlighted the relationship between Boccanegra (an expressive Luca Salsi) and Fiesco (the world-weary but vibrant-sounding René Pape), two old enemies who at the last moment find a kind of reconciliation. The youngsters — Amelia (the big-voiced, cool-toned Marina Rebeka) and Gabriele (the warmly ringing Charles Castronovo) — try to escape from the shadow of a fading generation’s knotted hatreds and conspiracies, but by the end they, too, seem only exhausted and defeated.

Exhausting, too, is the obsessive detail of Simon Stone’s production of Cherubini’s “Medée.” Set amid the prosperous elite of today’s Europe, it’s blunt yet effective, as is Thomas Hengelbrock’s conducting. Medea’s status as an outsider, viewed with suspicion, is here cleverly evoked by making her a Georgian who married a rich Austrian. (Georgia is the present-day location of Colchis, where myth has the character originating.)

Mr. Stone has eliminated the work’s interstitial dialogue and replaced it with black-and-white film sequences and recordings of voice mail messages that together flesh out the back story of a curdled marriage and its desperate aftermath. The result is that Medea’s victimhood — by disloyal husband and border control alike — is underlined, at the expense of her fearsome power. This suits the soprano Elena Stikhina — a sympathetic more than a commanding presence, her voice creamy and evenly produced in a daunting role.

Faced with an international cast and the perennial problem of the intelligibility of spoken dialogue in works like this, Mr. Kosky has given all the spoken lines to an actor, Max Hopp, playing the underworld valet John Styx. He speaks — and grunts, burps, sighs and creaks — as the other singers mouth the words, like a dubbed movie. It’s a choice as weird and delightful as the production itself.

With dizzying dances — encompassing music hall, ballet, hip-hop and, of course, the cancan — by Otto Pichler, the show is frantic and fabulous, a brilliant curatorial move on Mr. Hinterhäuser’s part. It’s the rarest artistic director who could oversee both “Oedipe” and “Orphée;” Salzburg is in good hands, and has made him the first in his position to have his tenure lengthened since Gerard Mortier, in the 1990s.

It may be that things are going well enough that Ms. Rabl-Stadler, the festival’s president since 1995, feels confident stepping aside; her contract ends next year, though it’s been extended several times in the past. Two years ago, a young cultural administrator, Lukas Crepaz, took on many of her responsibilities as Ms. Rabl-Stadler focused on cultivating sponsors and patrons.

At the interview on Monday, she more or less confirmed her departure. “I’m not thinking of the end,” she said, “but thinking that next year I have the chance a last time to help Markus realize his ideas.”

It would certainly make sense to retire on the high note of the 100th birthday. But with its powerfully good lineup this year, Salzburg hasn’t waited to start the party.

Users browsing this forum: No registered users and 70 guests