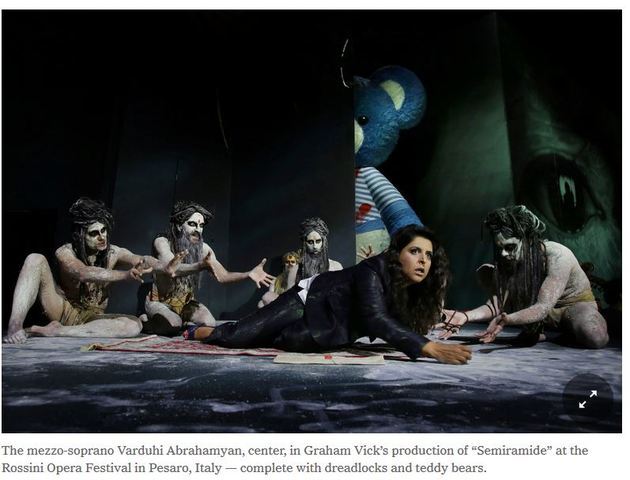 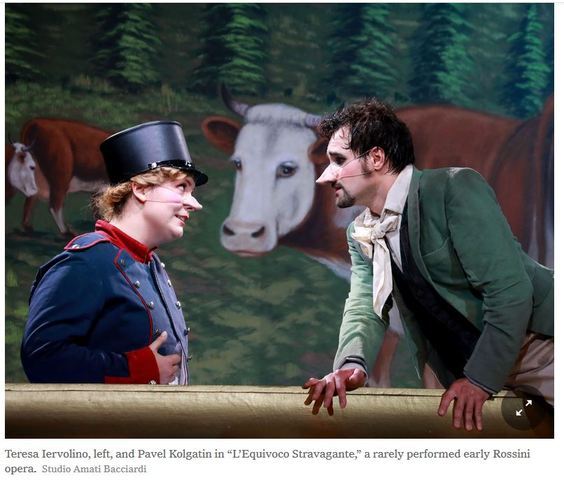 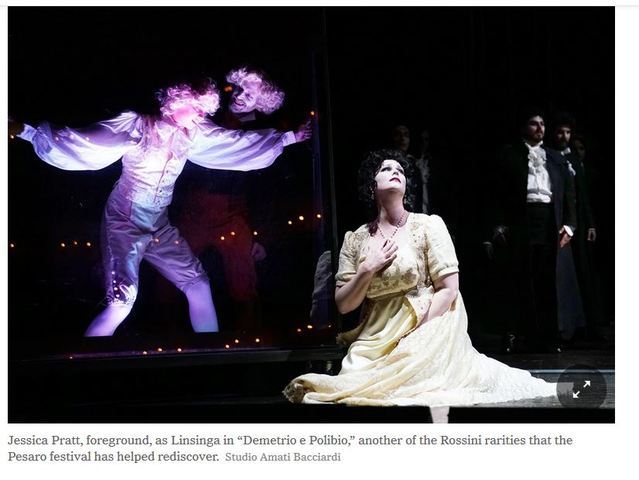 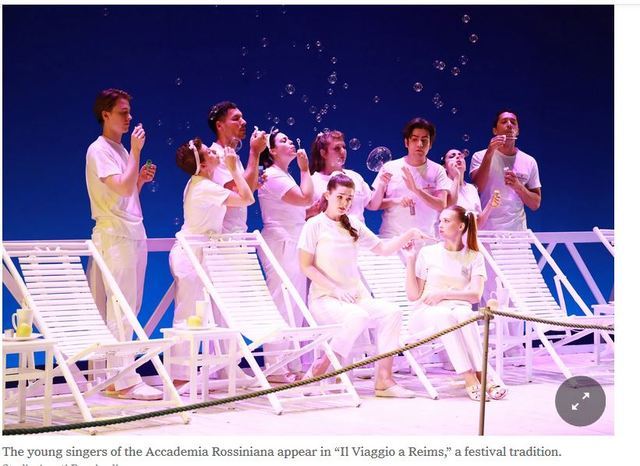 This beachfront festival, devoted to a beloved native son, may be the world’s most seductively charming annual opera event.

PESARO, Italy — The collapse of Italy’s governmental coalition this week made only a gentle splash in this Adriatic beach town. Every summer, thousands of Italian families spend their seaside vacations here, mingled with opera fans who come to celebrate the town’s most famous native son, Gioachino Rossini, at the Rossini Opera Festival — perhaps the world’s most seductively charming annual opera event.

This summer is the 40th iteration of the festival — which, through the cultivation of musicological research and the preparation of new performance scores, has helped contribute to a worldwide Rossini renaissance. Today he is probably better appreciated as a composer than at any time since his prime in the 1820s, when he was the most popular composer in Europe — better loved than Beethoven, and hailed by Stendhal as a musical Napoleon who had conquered the continent.

Born in Pesaro in 1792, and already famous by 20, he composed several dozen operas and then gave up the genre forever at the end of the 1820s, though he lived for another 40 years. The Rossini Festival presents his stage works in rotation, this year featuring his Assyrian-Babylonian epic “Semiramide” and two lesser known works of his youth, “Demetrio e Polibio” and “L’Equivoco Stravagante.”


These operas were long dormant. For much of the 20th century, Rossini had become a one-opera composer, known solely for his comedy “The Barber of Seville.” The technically demanding style of Rossinian ornamentation was unknown to most singers; even “The Barber of Seville” had a tenor aria in the last act that was hardly ever performed, because next to no one could sing it.

But starting in the 1980s, the Pesaro festival — which ended on Friday — pursued the scholarly rediscovery of even Rossini’s most obscure compositions, together with a dedication to teaching the magnificent fireworks of Rossinian style. In the 1990s, the festival created its own international superstar in the tenor Juan Diego Flórez, who then took some of Pesaro’s unearthed masterpieces to the world’s great opera houses. At this year’s gala concert, Mr. Flórez performed a series of scenes from “Guillaume Tell,” Rossini’s final opera, complete with brilliant top notes, almost a quarter-century after his Pesaro debut.

The major production this year, presented at the sports arena just outside the city, was Graham Vick’s intensely eclectic conception of “Semiramide.” The opera tells the story of the legendary Assyrian queen who poisoned her husband, and in Mr. Vick’s conception the drama unfolds from the perspective of their traumatized child, first shown onstage in a child’s bed with a blue teddy bear, which then becomes a giant teddy bear haunting the later stage action. Dreadlocked, near-naked priests represent an oracular primitive wisdom prophesying the vengeance of angry deities.


The cast — including the soprano Salome Jicia as the guilt-wracked Semiramide; the mezzo-soprano Varduhi Abrahamyan as the queen’s beloved, Arsace, who turns out to be her long-lost child; and the bass Nahuel di Pierro as the power-seeking Assur — together with the conductor Michele Mariotti demonstrated the power of Rossini’s music drama. Ms. Abrahamyan, a festival favorite, made Rossinian technique appear effortless, and while Arsace is usually a female singer costumed as a man, Mr. Vick’s production let her appear as a woman in high heels, an object of desire at the sexually complex court of Semiramide. (The duets between Arsace and Semiramide were mesmerizing.)

A more consistent, and certainly more delightful, production of “L’Equivoco Stravagante” (“The Bizarre Misunderstanding”), conceived by Moshe Leiser and Patrice Caurier as a piece of commedia dell’arte, with all the characters wearing Pulcinella noses. The excellent conductor was Carlo Rizzi.

First performed in Bologna in 1811, when Rossini was 19, the “bizarre misunderstanding” concerns a bookish young woman named Ernestina — sung by the brilliant young mezzo-soprano Teresa Iervolino — who would like to marry a philosopher. To ward off an unserious suitor, Buralicchio (sung in glorious voice by the baritone Davide Luciano), the story is circulated that Ernestina is actually a man who was castrated to make him an opera singer. Ernestina plays to the misunderstanding, with a splendid final aria in which she joins a chorus of soldiers going off to battle, a reminder that Rossini began to compose in the age of the Napoleonic wars.

One treasured Pesaro tradition is a performance, in the jewel-box Teatro Rossini, by the young vocalists of the Accademia Rossiniana of “Il Viaggio a Reims,” composed in 1825. It’s a celebration of different European nations, from Spain to Russia, represented by characters planning to attend the coronation of the French king.


The young singers of the academy are likewise international in their origins, and it was a touching performance of international harmony at a moment when the Italian government — and all of Europe — is in political crisis over issues of migration. This “Viaggio” production plays neatly to the seaside atmosphere of Pesaro, with nine shipboard deck chairs lined up onstage and performers in white terry cloth bathrobes. The tenor João Terleira stripped down to a Speedo onstage and sang his love duet while doing push-ups and situps.

“I dream of Pesaro as Salzburg,” Ernesto Palacio, the festival’s director and a onetime Rossini tenor, was quoted as saying in the Corriere Adriatico.

Yet Pesaro will probably never be as focused — or as sober-minded — as Salzburg. The irresistible charm of this festival is that the opera devotees mingle with the casual beachgoers in a seaside spirit that works for both constituencies — as well as for Rossini’s ever-expanding creative legacy.

Probably much more affordable than Salzburg or Bayreuth too. The Barber was the first opera I got to love, my first opera purchase, in the Callas-Alva-Gobbi Galliera version. I still regard that as a near-perfect performance of a near-perfect opera.
Opera Australia staged Il Viaggio a Reims this year, very successfully - a co-production.
I take every opportunity to see Rossini's operas, but in Australia they are limited. In nearly 40 years, all I've manged are 5 different Barbers, 4 Cenerentolas,a couple of William Tells, Il Signore Bruschino, Il Turca in Italia, Il Viaggio and Otello. That's only seven of the operas.
I might have to investigate the budgetary and logistic requirements for a trip to Pesaro.
Len, I imagine that in New York, you get to hear much more Rossini over time.
Last edited by barney on Sun Aug 25, 2019 6:25 pm, edited 1 time in total.
Top

Barney not enough for me-someone should bring in some more! Len
Top

And of course you are going to have more soy beans available than opera, thanks to your President. But I'd like "someone to bring in some more" Rossini to Melbourne as well.
Top

And of course you are going to have more soy beans available than opera, thanks to your President. But I'd like "someone to bring in some more" Rossini to Melbourne as well.

Barney do you think Gelb has sort of a trade war going on with regard to his not allowing European opera companies to show their productions HD style at US cinemas that show the Met's productions! How does it compare to Trump's trade war! Regards, Len

I didn't know that, Len. How is it in his control? Doesn't that come under the anti-trust laws, or whatever you call your competition legislation? He can't (I would have thought) restrain their trade?
Top

Barney I'm no lawyer but I think he has. Regards, Len

Users browsing this forum: No registered users and 55 guests