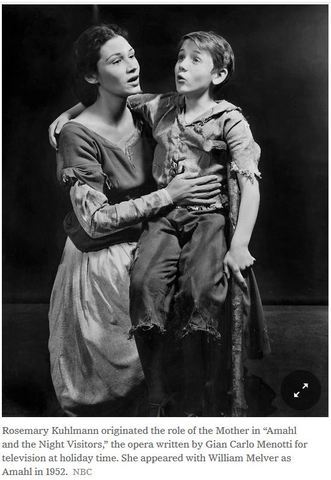 It seems her only role at the Met was Charlotte in Werther-1989. Regards, Len

In 1951 she sang a pivotal role in Gian Carlo Menotti’s made-for-TV opera, ‘Amahl and the Night Visitors,’ which became a classic.

Rosemary Kuhlmann, a soprano who was a central part of an early television experiment that became a holiday classic, singing the role of Amahl’s mother in the 1951 world premiere of the opera “Amahl and the Night Visitors” on NBC and returning to the part for years afterward, died on Aug. 17 in Warren, R.I. She was 97.

Ms. Kuhlmann, who lived in Narragansett, R.I., in recent years, was seen by millions of television viewers in the 1950s and early ’60s in “Amahl,” a one-act work by Gian Carlo Menotti commissioned by NBC specifically for the 1951 Christmas Eve broadcast.

Television was still in its infancy in the early 1950s, which meant there was a fair amount of risk-taking on the programming side, the familiar formats — half-hour sitcoms and hourlong dramas — having not yet solidified. The premiere of “Amahl,” the story of a shepherd boy who encounters the biblical three kings on their way to the manger in Bethlehem, was broadcast live from Rockefeller Center. Ms. Kuhlmann, who had only recently begun her opera career, was 29.


“The day of the telecast we rehearsed all day long,” she told Opera News in 2007. “When the performance finally rolled around at 9:30, I didn’t know if I had anything left to give vocally. Afterward I went to my dressing room and cried. Then I went with my mother to the party at the Rainbow Room. I walked down the steps, and everybody stood up and applauded.”

The broadcast was widely acclaimed, including by the music critic Olin Downes, who in a review that ran on the front page of The New York Times on Christmas morning was effusive, although noting the limits of TV in areas like scenery and sound.

The television production was remounted annually at Christmas for a number of years, Ms. Kuhlmann reprising her role for a decade as several different boys took on Amahl. Her “Amahl” success led to a stint with New York City Opera and other television opera roles before she stepped away from her singing career to raise a family.

“Looking back on it today,” she told Opera News of that heady first performance, “the whole thing was just unbelievable.”

Rebecca Paller, who as a curator at the Museum of Television and Radio organized a 50th-anniversary celebration of the broadcast in 2001, cited the impact on young viewers.

“Those 1950s telecasts of ‘Amahl’ were seen by millions of baby boomers,” she said by email, “who fell in love with opera and musical theater because of Menotti’s moving tale and music.”

“The poignant libretto was accompanied by some especially well-crafted music, and Menotti had handpicked the cast with great care,” she added. “By the time Amahl and his mother sang their touching final duet, Menotti’s new work had completely won over the home viewers, many of whom were seeing their first opera.”

Rosemary Elizabeth Kuhlmann was born on Jan. 30, 1922, on Staten Island. Her father, Frederick, was secretary of the New York Cotton Exchange, and her mother, Elizabeth (Junge) Kuhlmann, was a church organist and taught piano.

During World War II, Ms. Kuhlmann joined the Waves (Women Accepted for Volunteer Emergency Service) and was sent to the University of Wisconsin, Madison, to take a three-month course to learn Morse code. Back in New York, she used that skill to communicate with ships at sea. She also had a radio show on WNEW for a time, “Navy Serenade.”

After the war she enrolled at the Juilliard School of Music on the G.I. Bill, graduating in 1950, but she wasn’t a fan of opera at the time.

“My friend Pat Neway took me to ‘Die Walküre’ at the Metropolitan Opera,” she said, referring to a fellow soprano. “I hated it.”

She was singing in Robert Shaw’s chorale when she heard about an audition to be a replacement player in Menotti’s “The Consul,” which was running on Broadway. She left the chorale and took the role of the Secretary for the rest of the run, which ended in November 1950.

“Menotti’s music turned me on to opera,” she said. “It was so real — the vocal and the dramatic melded.”

After she had small roles in two 1951 Broadway shows, “Courtin’ Time” and “Music in the Air,” a producer from “The Consul” arranged for her to audition for Menotti for “Amahl.”

“You’re a little young,” she recalled him saying, “but we’ll make you look older and biblical.”

While he was writing the opera, Menotti would send her pieces of the score and the occasional question. (“What’s your high note?”) When it came time to perform the piece before a vast if invisible TV audience, Ms. Kuhlmann was more concerned about the 12-year-old playing Amahl, Chet Allen, than she was about nerves.

“I didn’t have time to think of myself,” she said. “I had to keep reminding him to look me in the eye while singing.”

In October 1952 she took on a larger role in “The Consul” for City Opera, Magda Sorel, with great success.

“Cheers, bravos and volleys of applause greeted Miss Kuhlmann at the final curtain,” The Times wrote in a review. “She earned them, for she did the part so convincingly that she made the much-bludgeoned, self-sacrificing Magda a moving, pathetic, valiant and completely believable human being.”

In November 1953 she performed the title role in “Carmen” for the first time. “The Habanera, Seguidilla and the rest of Carmen’s famous display pieces were done last evening in admirable style,” The Times said.


In September 1954 she took the lead role in City Opera’s “La Cenerentola” as a last-minute replacement for Frances Bible. She also toured and appeared as a guest artist with orchestras. Friends and advisers began telling her that the Metropolitan Opera was her next step, but after her 1957 marriage to Hugh Evans, a magazine executive, she scaled back her musical commitments. After her marriage ended in divorce in 1978, she became executive assistant to a vice president at PepsiCo.

“I would never give up what I have today — my two children and five grandchildren — to have said on my résumé that I sang at the Met,” she told Opera News.

In addition to her daughter, Ms. Kuhlmann is survived by a son, Peter, and those five grandchildren.

Because of her World War II service, her daughter said, Ms. Kuhlmann is to be buried with military honors in the Rhode Island Veterans Memorial Cemetery in Exeter.

Re: Rosemary Kuhlmann, Soprano in a TV Breakthrough, Dies at 97

lennygoran wrote:It seems her only role at the Met was Charlotte in Werther-1989.

No, that was Kathleen Kuhlmann. Rosemary K. never sang at the Met.
John Francis
Top

Re: Rosemary Kuhlmann, Soprano in a TV Breakthrough, Dies at 97

lennygoran wrote:It seems her only role at the Met was Charlotte in Werther-1989.

No, that was Kathleen Kuhlmann. Rosemary K. never sang at the Met.

John thanks for pointing that out-I couldn't find anything showing the 2 Kuhlmann's are related. Regards, Len
Top
Post Reply
3 posts • Page 1 of 1

Users browsing this forum: No registered users and 65 guests