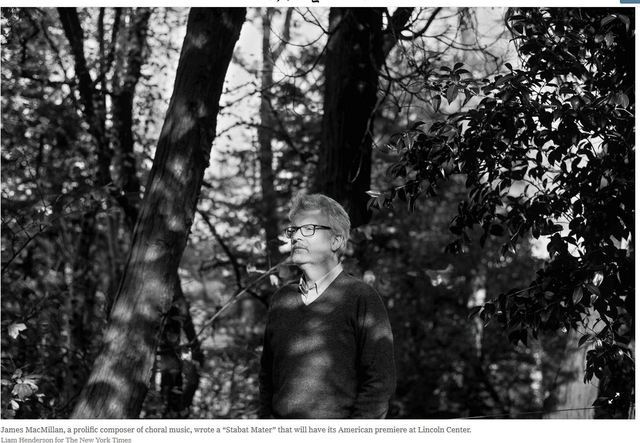 There are alot of audio clips at the NYTimes site! Regards, Len

James MacMillan’s setting of the centuries-old poem will have its American premiere at Lincoln Center’s White Light Festival.

For centuries, Franciscan monks have led pilgrims along the Via Dolorosa, or “path of sorrows,” that Christ is believed to have walked to his crucifixion. This devotional practice, mirrored in churches worldwide in the Lenten Stations of the Cross, encourages reflection and penitence.

And for centuries, composers from Palestrina to Arvo Pärt have trod this path musically, through settings of the Passion narratives, Christ’s final words and the anonymous 13th-century poem “Stabat mater dolorosa,” which meditates on the suffering of Mary, the mother of Jesus, as she stands at the cross.

James MacMillan has undertaken this musical pilgrimage several times: a pair of Passions (St. John and St. Luke); multiple Masses; a richly expressive “Seven Last Words from the Cross” and the Stations of the Cross-based piano trio “Fourteen Little Pictures.” But his “Stabat Mater,” written in 2015 and having its American premiere on Thursday at Lincoln Center’s White Light Festival, offered him something new.


“I’m quite interested in finding new ways of retreading or telling the same story over and over again in different ways,” Mr. MacMillan, 60, said in a recent interview. “The ‘Stabat Mater’ allows a different flavor, a different perspective. To see the Passion story through Mary’s eyes, as it were, even before Matthew, Mark, Luke and John, was fascinating.”

That perspective is one of pathos sustained through 20 stanzas of Latin verse. Mr. MacMillan divides the text into four large movements, each exploring a different shade of grief. The first movement asks, “What person would not weep seeing the Mother of Christ in such agony?” at first gently with a mournful, melismatic soprano solo — then aggressively, with collective shouting. Such contrasts arise throughout: archaic choral polyphony and modernist whisperings, keening string clusters and plaintive drones.

The music, for chamber choir and string ensemble, “is visceral in its energy,” said Harry Christophers, who will conduct the Lincoln Center performance by The Sixteen and the Britten Sinfonia.


Mr. MacMillan is one of Scotland’s most prominent living composers. He is also its most outspokenly Catholic. As Philip A. Cooke wrote recently in an incisive study of his music, “not since Olivier Messiaen has a composer given so much of his creative life to faith.”

Even in Mr. MacMillan’s early successes, which engaged his country’s musical heritage, he explored sacred themes. His 1990 symphonic poem “The Confession of Isobel Gowdie,” about the 17th-century torture and burning of an accused Scottish witch, ends with a serene string harmonization of a plainchant drawn from the Catholic Requiem Mass. His popular percussion concerto, “Veni, Veni, Emmanuel,” composed two years later, incorporates other Catholic plainsongs.

Mr. MacMillan has since become a prolific choral composer. He was first commissioned by The Sixteen in 2002, for a setting of “O bone Jesu”; this led to a productive artistic relationship. In 2009, Mr. MacMillan created a lush, expansive “Miserere” (which will open the Lincoln Center program) for them; they later helped to launch the Cumnock Tryst music festival in his hometown. This year, The Sixteen performed in the premiere of Mr. MacMillan’s Fifth Symphony.

The idea for a new “Stabat Mater," however, came from the philanthropist John Studzinski, whose Genesis Foundation has championed both Mr. MacMillan and The Sixteen. The poem has a robust musical history — settings include 16th-century liturgical a cappella ones by Palestrina and Lassus, and large-scale Romantic concert works by Dvorak, Liszt and Verdi — but it was relatively overlooked by composers in the 20th century.

After commissioning a series of shorter “Stabat Mater” pieces in 2014 from Alissa Firsova, Tonu Korvits and Matthew Martin (playfully called the “mini-martyrs” by Mr. Studzinski and Mr. Christophers), the Genesis Foundation ordered a full-scale work from Mr. MacMillan. The Sixteen and the Britten Sinfonia premiered his “Stabat Mater” in 2016 in London; two years later, they performed it in the Vatican’s Sistine Chapel, which is rarely used for concerts.


For Mr. MacMillan, the “Stabat Mater” holds personal relevance: Shortly after he completed it in 2015, his 6-year-old granddaughter, Sara, died. But he also finds in it a broader resonance. The death of Alan Kurdi, the 3-year-old Syrian refugee who drowned that same year while crossing the Mediterranean Sea, Mr. MacMillan said, “gave me a wider context to consider the ‘Stabat Mater’ as really quite a modern statement.”

And, Mr. Christophers said, “you can be of any faith or no faith to get inside this poem and really realize that actually what James is writing is something very much for the 21st century.”

Although Mr. MacMillan’s faith gives his work a Catholic hue, he sees himself as part of a widespread search among composers for the sacred in contemporary music. Wolfgang Rihm, Sofia Gubaidulina and Osvaldo Golijov are just some of the composers who have written a Passion since 2000; others, like Tan Dun and Philip Glass, have reimagined the Passion genre to include Buddha and Ramakrishna.

“You imagine the Passion text as being of antiquity and in a sense not of modernity,” Mr. MacMillan said. “But Penderecki’s ‘St. Luke Passion’ in the late 1960s showed that even using some of the most forthright modern musical language, there was real scope to re-enter this traditional world, the greatest story ever told, as it were, and to tell it anew with a new language. And ever since there’s a number of very different kinds of composers retreading these steps.”

Mr. MacMillan plans to return to the Passion story, to set the words of St. Matthew and St. Mark. But for the moment he’s working on something more joyful: a Christmas oratorio.

Users browsing this forum: No registered users and 66 guests