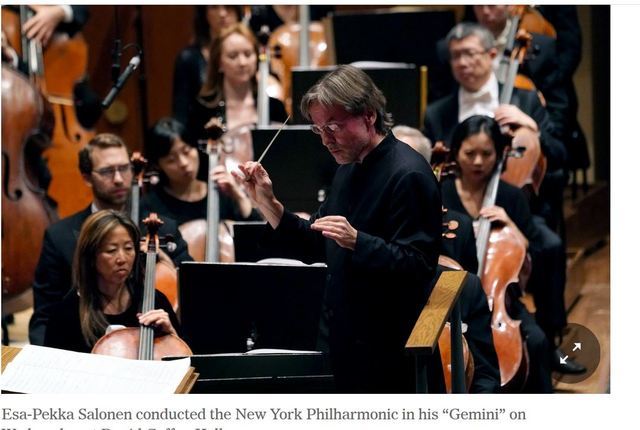 I remember seeing the opera a long time ago via a DVD but have never seen it live-I'd like to see it again sometime as I remember being impressed by it-I think there's at least one version available on youtube. Regards, Len

A whole is divided into two parts, nearly equal in size. While sharing a fundamental character, they diverge just as fundamentally. A section that could be described as recalling the color blue — even if it’s the midnight variety — is connected by a tiny, fragile bridge to an evocation of dark, churning red.

Esa-Pekka Salonen doesn’t mention Democrats and Republicans — or Leavers and Remainers, or other bitter bicameral oppositions of our time — in the program notes for his new orchestral work, “Gemini.” But thoughts of politics, of face-offs between countrymen, were inescapable as the New York Philharmonic gave the local premiere of this two-headed piece on Wednesday at David Geffen Hall.

“Gemini” is the union of “Pollux” (2018) and “Castor” (2019), which can also be performed individually and are named for the half brothers of Greco-Roman myth: both sons of Leda, but Castor mortal and Pollux divine.

Conducting the Philharmonic in these performances, Mr. Salonen has nestled the twins amid works written by Hindemith and Schoenberg in the 1920s and ’30s. Those German composers looked toward the past for inspiration and consolation at a time of national and international unease; with his classical subject matter and our similar moment, Mr. Salonen has placed himself in their company.


To his credit, he has not drawn the contrast too sharply, or used his structure to represent good and bad, pretty and ugly. “Pollux” (played first) and “Castor” emerged from a single rhythmic germ, and they also share an ominous, nocturnal mood, brasses brooding and drums menacing.

The world he depicts is angry on both sides. “Pollux,” though, is misty, swirling, altogether starry; delicate violins at one point are joined by a gentle motif in the flutes that becomes a gradual, dawnlike blossoming of winds.

Mr. Salonen leans a bit too heavily on Pollux’s divinity, overloading that music with galactic twinkling. “Castor” is the tighter and more compelling half, whooping and whining in feverish strings and pounding with rhythms that echo the gallop of horses, upon which Castor and Pollux are often depicted riding. In the loud, grim ending, there is little trace of the hopeful conclusion of the twins’ myth: When Castor is dying, Pollux chooses to share his immortality with his mortal brother, and the two spend eternity alternating between the heights of Olympus and the depths of the underworld. In other words: compromise, which is so elusive today.

Hindemith’s “Ragtime (Well-Tempered),” from 1921, which opened the concert, whips one of Bach’s fugues into a tart carnival. Without pause, the Philharmonic then played Schoenberg’s rich yet focused 1922 arrangements of two Bach chorales. The program closed with Hindemith’s “Mathis der Maler” Symphony (1934), a sonic portrait of Matthias Grünewald’s bracing 16th-century Isenheim Altarpiece.

By the mid-1930s, Hindemith had been blacklisted by the Nazis. He had grown fascinated by the story of Grünewald, who 400 years before had also seen his livelihood suffer over political differences, and whose work was then largely forgotten for centuries.


In the Philharmonic’s elegantly impassioned performance, the symphony seemed intent on preserving, as if in amber, the spirit of a distant past — but also on puncturing it, over and over, with the violence of the present. This was an energetically played but altogether melancholy evening.