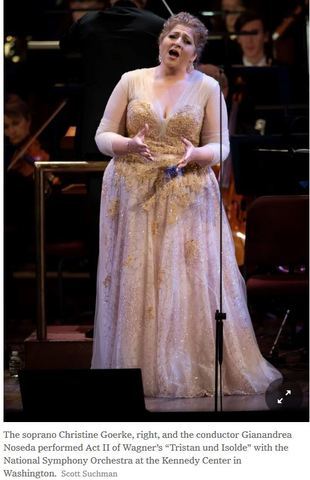 WASHINGTON — A lot was at stake for the soprano Christine Goerke and the conductor Gianandrea Noseda on Wednesday, when they performed Act II of Wagner’s “Tristan und Isolde” in concert here with the National Symphony Orchestra.

Ms. Goerke’s performances as Brünnhilde in Wagner’s “Ring” last season at the Metropolitan Opera reaffirmed her status as one of the world’s outstanding dramatic sopranos. But is she up for Isolde, the final summit for a Wagnerian singer?

And while Mr. Noseda has an extensive operatic repertory, his experience with Wagner is limited. With a “Ring” on the horizon in his new position at the Zurich Opera, is he adept at leading this challenging composer’s music?

The answers, judging from the performance at the Kennedy Center, which these forces will bring to David Geffen Hall in New York on Sunday: yes and yes, with some caveats.


Ms. Goerke sang splendidly, with silvery top notes and earthy colorings lower in her range. Still, she seemed to be feeling her way into the role — at least the 80-minute chunk that is Act II, most of which is devoted to an impassioned love duet. When Isolde, in a wild-eyed moment, tells her nurse that the goddess of love commands her to plunge into the realm of night, Ms. Goerke’s singing had sheen but lacked blaze.

There was something affecting, though, about this slight feeling of tentativeness in her performance. Here was a great singer making herself vulnerable and inviting an audience to share as she took up one of opera’s great challenges.


In music that’s often conducted with thick, rich sound, Mr. Noseda drew lucid, fleet and textured playing from the orchestra during urgent stretches of the score. The opening of this second of three acts — when a nervous Isolde is waiting for Tristan to arrive as horn calls from a nighttime hunting party are heard in the distance — was wonderfully restless and lithe. As the act progressed, Mr. Noseda was good at revealing the shape of long arcs in the score, as the music swelled and crested and subsided.

At times, for all the bracing vigor and transparency, I wanted more traditional Wagnerian weightiness and depth. Mr. Noseda was at his best as the music settled into the murmuring, blissful “O sink hernieder” love music, which had hints of almost Italianate lyricism in this performance. Ms. Goerke and the tenor Stephen Gould exchanged long-spun, melting phrases while the orchestra shimmered; subtle syncopations in the warm strings came across like nervous breathing.

Mr. Gould was not testing any waters: He has long been a leading Tristan. At times his voice sounded a little patchy and rough. But he mostly sang with remarkable freshness and clarion tone, especially during Tristan’s bursts of unhinged ardor, and brought touching poignancy to moments when he was transfixed

The mezzo-soprano Ekaterina Gubanova, as Brangäne, Isolde’s maid, excelled during the mystical moment when she watches helplessly, full of foreboding, as Isolde and Tristan fall fatefully into each other’s arms. And the bass Günther Groissböck was extraordinary as King Marke, who is agonized when he discovers Tristan, something of a surrogate son, in the throes of passion with Isolde, who is supposed to marry Marke. I have not heard this monologue sung with such a mixture of stentorian power and crushing sadness since René Pape sang the role at the Met in 1999.

Mr. Noseda is in his third season as music director of the National Symphony and the orchestra seems to be thriving under him. And in Zurich and elsewhere, we can hope for more Wagner from him. And as for Ms. Goerke, this performance just whets the appetite for a complete — and staged — Isolde.

Users browsing this forum: No registered users and 21 guests