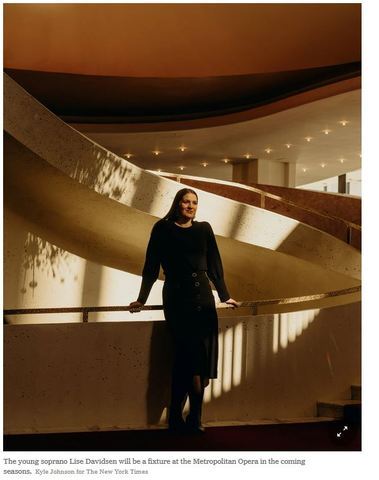 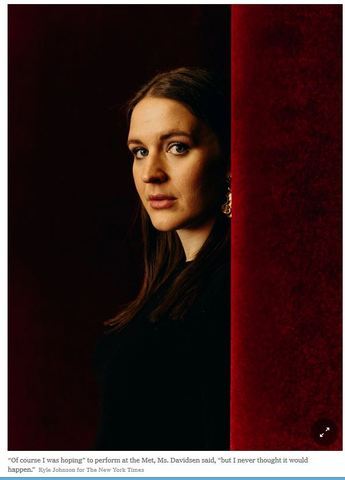 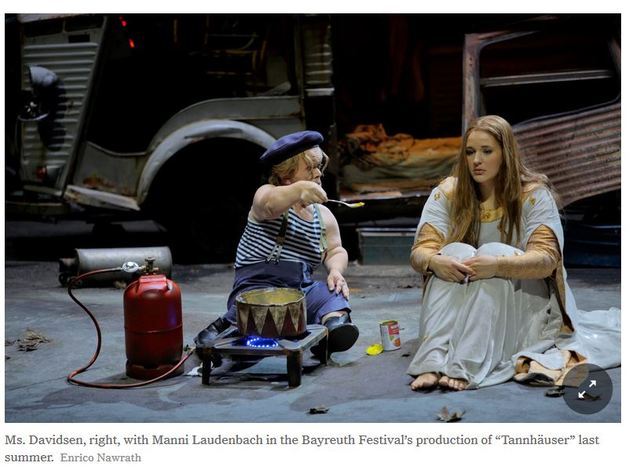 Lise Davidsen, a 32-year-old soprano starring in “The Queen of Spades,” has swiftly risen to the top of the field.

When you hear about the soprano Lise Davidsen, you might find yourself questioning the facts. Could someone who didn’t even see an opera until she was in her 20s really be making her Metropolitan Opera debut at 32? Surely she hasn’t been singing opera for only a decade?

But it’s true. Ms. Davidsen — who stars in Tchaikovsky’s “The Queen of Spades” at the Met beginning Nov. 29 and will be a fixture there in the coming seasons — is the rare newcomer to opera who has not only caught up to the field but dashed to its forefront, sweeping contests and gaining a reputation as the great Wagnerian promise of her generation.

“It’s a one-in-a-million voice,” the conductor Antonio Pappano said in an interview. Esa-Pekka Salonen, who led the Philharmonia Orchestra on Ms. Davidsen’s recent debut album, is convinced that “she’s going to go very, very far.” Peter Gelb, the Met’s general manager, described her as being “in a league of her own.”

Such high praise is difficult for Ms. Davidsen to contemplate, since just 10 years ago, on a visit to New York, she posed for a photo outside the Met almost as a joke, thinking she would never perform there (and lacking the money for a ticket).

“Of course I was hoping,” she recalled in a recent interview at the opera house, “but I never thought it would happen.”

It happened, and “The Queen of Spades” is just the beginning. The Met acted quickly to cast her as Leonore in “Fidelio,” Chrysothemis in “Elektra,” Ariadne in “Ariadne auf Naxos,” Eva in “Die Meistersinger von Nürnberg” and the Marschallin in “Der Rosenkavalier.”

And that’s in the next three seasons.


The Met wasn’t anywhere near Ms. Davidsen’s radar as she grew up in small-town Norway, where the nearest major opera house was almost two hours away by train. The daughter of an electrician and a health care worker, she played handball and sang in community choirs and annual Christmas shows. Then, as a teenager, she began to take guitar lessons, with the distant dream of becoming a singer-songwriter.

She did follow her ambition to Bergen, where she studied voice at the Grieg Academy — but not opera, which Ms. Davidsen said “was so far away not because of the music, but because the whole idea of being onstage was too scary.” She preferred to sing Bach and Handel. By the time she graduated, in 2010, and arrived at the Royal Opera Academy in Copenhagen for her master’s degree, Ms. Davidsen had decided that she was a mezzo-soprano, and she would sing Baroque music.

Her teacher disagreed. “She turned my life upside down,” Ms. Davidsen said. “At our first meeting, she said, ‘No you’re not a mezzo, you’re a soprano, and you should be doing opera.’”

For a young singer, news like this can set off an identity crisis. “As students, you are so unsure about everything, so what you can hold on to, you hold on to with everything you have,” Ms. Davidsen said. “My whole plan was sort of settled. So how was I just going to become a soprano, how was I going to learn a whole new repertoire?”

But she convinced herself that being good was the only thing that mattered. And her education truly began: She saw her first opera, Strauss’s “Der Rosenkavalier,” and was overwhelmed by its beauty and intensity. She listened to recordings of the great sopranos, like Jessye Norman, Kirsten Flagstad and Birgit Nilsson. She experimented with singing “Dich, teure Halle” from Wagner’s “Tannhäuser,” even though her voice’s lightness at the time was better suited to Mozart.


“I have always felt like the one who doesn’t know anything, the one who isn’t good enough,” she said. “I was constantly afraid, and in a way that made me work so hard, that I could be where I am today.”

Ms. Davidsen had originally wanted to become a singer-songwriter to describe and communicate her feelings. “And now the stage, and opera, was where I could find that communication,” she said. “This feeling that it can go straight to your core — there isn’t really anything else that can do that. I realized that this is what I need to do.”

Finished with school, several years into her life as an operatic soprano and with some professional work that showed signs of promise for a viable life as a singer, Ms. Davidsen began to enter competitions. And in 2015, with “Dich, teure Halle” as her showpiece, honors came in rapid succession, including the top prize at Operalia.

Attention came suddenly. Europe’s top opera houses all wanted to book her, journalists wanted to interview her, congratulations flooded in from friends and family. “It was all good,” Ms. Davidsen said, “but too much of anything can be overwhelming.”

After Operalia, she tried to take a break with her boyfriend in Paris. “I couldn’t go anywhere,” she recalled. “Whatever he proposed, I started crying.” This still happens every now and then: Ms. Davidsen calls it “hitting a little wall,” which can be cured by a good cry, an hour at the gym, or “watching ‘Sex and the City’ for the 150th time so I can scroll Instagram.”

With a penetrating voice and a height of over six feet, she commands a stage with ease. Mr. Pappano recalled a rehearsal in London for Wagner’s “Ring”: “When she opened her mouth, we were all stunned. The voice has a light in it.” Mr. Salonen has a similar story from inside the studio for her Decca album, which contains two selections from “Tannhäuser” as well as Strauss selections, including his “Four Last Songs.”

“When she sang the first phrase of the ‘Tannhäuser,’” he said, “the orchestra kind of collectively dropped their jaws: ‘Did that sound really come out of a person?’”

Opera is always difficult to capture in recording, and Ms. Davidsen’s album isn’t the best introduction to her immense dynamic range. So the consistent quiet of Elisabeth’s prayer from “Tannhäuser,” for example, comes off better than the peaks and valleys of “Dich, teure Halle.” What little criticism she received, though, was mostly reserved for her choice to program, somewhat precociously, the autumnal “Four Last Songs.”

“It pisses me off a little bit that you have to be a certain age to feel certain feelings,” Ms. Davidsen said. “Teenagers have all those feelings, and more, in a day. If someone at the age of 80 says, ‘I don’t want to hear Lise do those songs because she’s too young,’ well, fine: Then you can find another recording, because there are so many beautiful ones.”

“But I do believe that I’m entitled to take on these feelings, to take on the difficulties in life,” she continued. “That’s our job in opera, and that’s the same with the ‘Four Last Songs.’ I really hope that if I keep on singing, I get to record them again in 15 or 20 years.”

By then, if Ms. Davidsen continues at her current pace — with no less determination than when she was in school, yet with the restraint not to take on new roles before she’s ready — she will have conquered large swaths of Wagner, a personal favorite. She has already sung minor parts in the “Ring” and the rarity “Das Liebesverbot.”

Elisabeth in “Tannhäuser” has become one of her signatures; it’s how she made an awe-inspiring debut at the Bayreuth Festival in Germany this summer. She wowed even Katharina Wagner, the festival’s artistic director and the composer’s great-granddaughter, who said in an email that Ms. Davidsen is ideal for Bayreuth.

“She has a unique carrying voice,” Ms. Wagner said. “Even the quietest and finest piano of her voice can be heard in every corner of the auditorium, and every forte floods the audience. It is also obvious that even more important vocal parts than Elisabeth will come in future.” (Indeed, Ms. Davidsen will be back next summer as Sieglinde in “Die Walküre.”)

During a rehearsal last week, Ms. Davidsen sang onstage at the Met for the first time, with an electricity that left many in the theater speechless. “This is a major artistic event,” Mr. Gelb said afterward. “It’s always awkward to raise people’s expectations, but in this case I don’t any qualms. Ultimately, she’s going to be the next great Brünnhilde.”

If Ms. Davidsen has the sound and presence of a diva in the making, she doesn’t have any of the haughtiness that’s thought to come with it. Mr. Pappano, who will reunite with her for “Fidelio” at the Royal Opera House in London next spring, described her as “extremely observant and analytical” in rehearsals; at the Met, she has been solemnly receptive to notes from the conductor, Vasily Petrenko, and friendly with fellow cast members. After a chorus singer complimented her, she held her hand to her chest and said, “That made my day!”

After all, Ms. Davidsen doesn’t believe she’s a Nilsson or a Flagstad just yet. “Those singers are inspirational, and idols,” she said. “If I could ever achieve a percentage of what they have done, I would be happy. But I would not know until I’ve been in the business a couple of years.”

Ms. Davidsen was quick to clarify: She didn’t mean literally two years; obviously, she said, it would take many more. But, given what she’s accomplished in a single decade, “a couple of years” sounded entirely possible.

Re: A ‘One-in-a-Million Voice’ Arrives at the Met Opera

Thanks for posting this, Len. Always glad to hear about Lise Davidsen. I have her recording of Wagner//Strauss with Salonen (reviewed elsewhere in these pages) and found her debut on disc to be quite excellent. As for Strauss's Four Last Songs, both Lucia Popp (Tennstedt) and Gundula Janowitz (HVK) were quite young when they made their recordings, so I don't understand the criticism of Davidsen being too young. I find that her interpretation has quite a bit of depth.
Top

Re: A ‘One-in-a-Million Voice’ Arrives at the Met Opera

It is quite a voice.