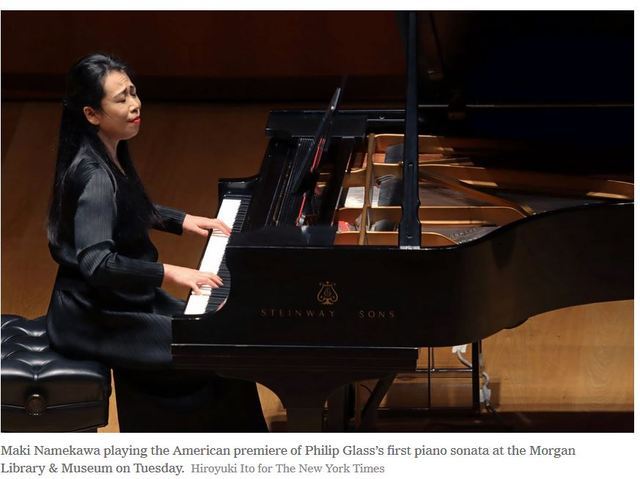 Thousands of people took in the bronzed, glacial grandeur of Philip Glass’s “Akhnaten” at the Metropolitan Opera on Tuesday evening. A couple of miles downtown, a far smaller group heard a very different Glass — lively and sly; intimate and changeable — as Maki Namekawa gave the American premiere of his new piano sonata, his first venture into that genre, at the Morgan Library & Museum.

Mr. Glass may not care about his legacy, but he’s hardly unaware of the dynamics that shape a composer’s reputation. “If I’m to be remembered for anything,” he is quoted as saying in the program notes at the Morgan, “it might be for the piano music, because people can play it.”

As his career took off, he was increasingly asked to play solo concerts. So, simply enough, he began to write piano pieces to perform at them. For a while, he kept these mainly for his own use; if people wanted to hear them, he reasoned, they’d have to hire him. And, as he observes, they were eminently playable; while a good pianist, Mr. Glass was never a virtuoso.

These works — like the first book of études, the five parts of “Metamorphosis,” “Mad Rush” — have since been published and widely recorded, and they are what Mr. Glass means when he says that his piano music is what’s most likely to be remembered among his massive output. But gradually, and especially over the past decade, his piano compositions moved beyond the level of what he could plausibly perform, their technical demands perhaps culminating — at least for the moment — in the new sonata.


The first movement begins with gently surging, triumphal motifs, passing swiftly between major and minor moods before settling into bustling activity and, suddenly, a mournful tenderness that carries into the start of the second movement: an oscillating pattern in the left hand, familiar in Mr. Glass’s music, and a deliberate melody in the right.

Dissonances creep in, but nothing too troubling, especially in a passage of serene chords that’s the prettiest part of the sonata. For all the work’s switches of mood — between major and minor, churning and calm — the stakes feel low, though not unagreeably. Even when it’s headlong, as in the chugga-chugga perpetual motion of the third movement, the work is light, even superficial, a revue of Glassian riffs that’s pleasant and passing. While it’s imposing, at nearly 30 minutes, the sonata feels larky.

Ms. Namekawa is an old hand at all this; she was the first to record Mr. Glass’s complete études, and is the wife and piano-duo partner of the conductor Dennis Russell Davies, this composer’s most notable champion. She visibly grooved throughout the performance, emphasizing the dancing youthfulness of a piece by an 82-year-old composer.

The first half of the program was a kind of joke on this point: Berg wrote his noirish Piano Sonata when he was in his early 20s, and Mozart Camargo Guarnieri was 30 in 1937, when he wrote his genial Sonatina No. 3.


Most astonishing, Mendelssohn was still in his teens when he wrote his first piano sonata. Played by Ms. Namekawa with sprightly sensuality and exuberant wit, it burst with precocious energy — and outdid in profundity much music written by composers many decades older.