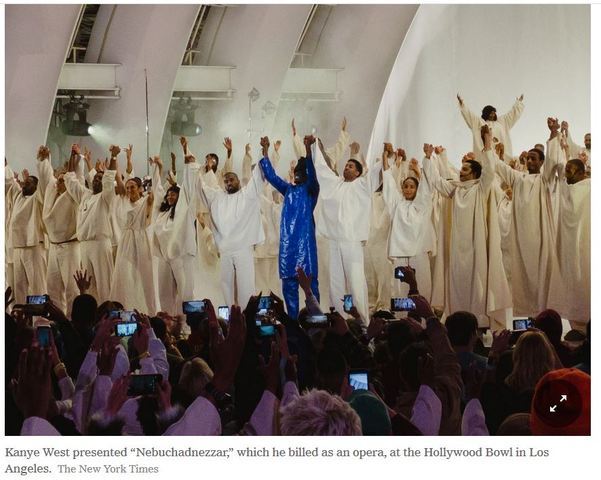 LOS ANGELES — What’s the only art form big enough to hold Kanye West’s grandiosity, his grievances, his cast-of-thousands collaborations, his musical lushness and toughness, his religiosity, his self-appointed skill at design? Has anyone in music — has anyone, ever — been so operatic?

But being an operatic person doesn’t mean you’ll create a good opera. And “Nebuchadnezzar,” the passionate, puzzling work West billed as an opera — announced on Nov. 17 and performed at the Hollywood Bowl just seven days later, on Sunday — wasn’t really an opera, and it wasn’t really good.

What it was, more or less, was another of this year’s loud declarations of West’s born-again bona fides. Sitting off to the side of the stage and speaking with inflamed urgency, he read passages from the biblical Book of Daniel — the story of a mad king who finds God — as an enormous gospel choir milled around in pale gowns and wailed phrases in Latin.

This was Sunday Service, the group West has been presenting in church-like performances since January — mainly in Calabasas, Calif., but also at Coachella and elsewhere — in which he has tended to recede from the spotlight, more ringleader than performer. The group was also featured, to earbud-popping effect, on West’s ninth album, “Jesus Is King,” released last month, and is said to be central to his next, “Jesus Is Born,” scheduled for, yes, Christmas.


Sunday Service makes a cleansing roar. And West has clearly been searching for purification and healing after a tumultuous period of canceled tour dates, opioid addiction, hospitalization for mental illness, public support for President Trump that has infuriated a good chunk of the country, and incoherent statements about slavery that have infuriated almost everyone.

His latest provocation is his salvation. “Jesus has won the victory because now the greatest artist that God has ever created is now working for him,” West said onstage at Joel Osteen’s Houston megachurch earlier this month.

And what better way to emphasize the seriousness of his faith than to translate it into the very serious form of opera, an easy signifier of dazzling spectacle that also connotes old-fashioned substance and significance: something lavish, but also earnest. “We’re going to a Kanye opera,” a woman declared to her friend with mock pomposity as she walked into the Bowl. “We’re sophisticated.”

Over two hours after the ticketed start time, the 56-minute “Nebuchadnezzar” began with the choir filing onstage and beginning to chant as a figure in a royal-blue outfit raved, writhed and screamed in the middle. (You could be forgiven for thinking of “Jesus Christ Superstar.”) This was Nebuchadnezzar, the Babylonian king who, in the Bible’s telling, conquered the Jews and enlisted a few of them as servants.


One, Daniel, found success interpreting the king’s dreams, including a vision of Nebuchadnezzar sent into the wilderness for seven years of Lear-like torment. That period of insanity fulfilled, the king returned in a new spirit of modesty, glorifying God: “And those who walk in pride He is able to humble.”

There was something intriguing about West having Nebuchadnezzar (played by the young rapper Sheck Wes, whose song “Mo Bamba” went viral last year) express himself largely in screams and moans, a vision of masculinity rendered unintelligible by its own toxicity. A male soloist seemed to be portraying Daniel, though for some reason there was also a female soloist singing much of the same music — mostly wordless and hyper-operatically soaring, in an Andrea Bocelli kind of way.

There was little text, and it was nearly impossible to make it out from the audience; a musicologist watching a livestream of the performance said on Twitter that she had heard “Lux aeterna” and “Rex gloriae,” which are phrases from the Requiem mass, and “Animus deum,” which is not. The smoke-shrouded staging, directed by the performance auteur Vanessa Beecroft, a longtime West collaborator, only intermittently clarified matters or offered her characteristic immaculate polish. There was a thrown-together quality to the show that wasn’t without charm but was nevertheless, especially given the price of some of the tickets, disappointing.

The most impressive sequence involved the statue that Nebuchadnezzar orders built for worship. Here it was an actor on a large plinth, draped in shiny gold fabric, a vision of moving sculpture as eerie and elegant as Beecroft’s best work. But otherwise the stage was cluttered and awkward, with pantomime battles and swirling circular dances crowded into the uneasy stasis.

None of this would automatically disqualify “Nebuchadnezzar” as opera: There are wordless operas, spoken operas, unclear operas. There has even been room in the art form for another abstract meditation on an ancient leader’s religious awakening: Philip Glass’s “Akhnaten” is running at the Metropolitan Opera through Dec. 7.

But the starkly presentational style of “Nebuchadnezzar” — the dominance of plain narration; the lack of real characters; the overtly religious content, with biblical texts playing a key role — places this more in the class of oratorios, like Handel’s “Messiah.”

This is an academic distinction, sure, but it suggests that West was more interested in evoking the trappings of opera — the bombast it represents and the anticipation it could conjure for his potential audience — than in actually shaping this fascinating material into a dramatic form expressed through music. “Nebuchadnezzar” was content to literally tell its story; you got the sense, despite the hordes onstage and the many dozens of extras periodically flooding the aisles, that everything was an afterthought besides the words West was reading.

It happens that Verdi’s first lasting success, in 1842, was a Nebuchadnezzar opera, “Nabucco.” The work enlarges the mad king to tragic stature yet keeps him recognizably human, translating his journey to faith into emotion — with music that follows the shifting landscape from pride to brokenness to humility. It’s not that West’s self-declared opera needed to sound like Verdi, but it did need to offer some persuasive connection between music and theater.

The seeds of something were here. It’s clear that West sees himself in this story, and doubly: He’s Daniel, the consummate storyteller and interpreter, the prophet and hero, and he’s also the suffering leader who’s found peace in God. But he hasn’t — not yet, at least — been able to turn those identifications into art. That, at this point in his career, means less to West than bluster: shouting the Bible in front of many thousands of people, a sidewalk preacher on a mass scale.

Users browsing this forum: No registered users and 46 guests