Per Wiki about the Schumann work : “This was Schumann's last work before he was admitted to the mental hospital in Bonn-Endenich. Wolf-Dieter Seiffert wrote in the preface to Thema mit Variationen (Geistervariation) that at this time of his life, Schumann believed that he was surrounded by spirits who played him music, both "wonderful" and "hideous". They offered him "most magnificent revelations", but also threatened to send him to Hell. Seiffert goes on to write that on 17 or 18 February 1854, Schumann wrote down a theme he said was dictated to him by voices like those of angels. He did not recognize that it was actually a theme which he had composed previously.Several days later, he wrote a set of variations on this theme. While he was still working on the composition, on 27 February he suddenly threw himself half clothed into the freezing Rhine river, from which he was rescued and returned home. After surviving the suicide attempt, he continued to work on it. The next day, he completed the work and sent the manuscript to his wife, Clara, who had left him the night before, on the advice of a doctor.”

Lu played the Brahms and Schumann without a break between.
Top

There are also YT’s of him playing Rach 3, Mozart 491, Chopin E minor, but I thought this would be a better “ test” so the one I heard. Yes !

( Not to mention what a virtuoso Beethoven was, and the slow mov. extraordinary among all PC’s period. )
Top

Although his Rach 3 certainly not chopped liver, here live video from a 2017 in Germany ( on a Bechstein, but YT sound ) , especially fine slow mov. ( becoming more the highlight of this Concerto for me ) :

His cd recording of the Chopin Preludes now here for free listening:

A live performance earlier today with Lu, posted as the Mozart is one of my fav PC's period, and I dont believe I'd heard the cadenzas he played , which unfortunately were not identified, the performance otherwise quite fine and very mature.I heard only the Mozart.

Mendelssohn: Symphony No 3 in A "Scottish" Ulster Orchestra conducted by Alpesh Chauhan
Top

Finally had a chance to hear Eric Lu's 2019 Wigmore Hall recital this morning. I have to say that his Brahms was truly impressive: very intimate and sensitive without being maudlin to any degree. The Schumann was gently played, while his Chopin Preludes were, although quite beautiful, lacking in momentum here and there, thus, on the whole, less effective.

His 2017 Prokofiev VII had every note in place, but it lacked the depth of Giltburg or the sheer dramatic electricity of Sokolov.

All-in-all, Lu is an excellent artist with room to grow. Thanks for posting all these links! I look forward to hearing his CD on amazon: 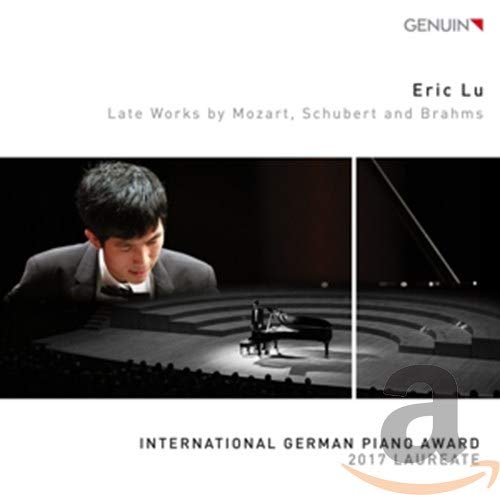