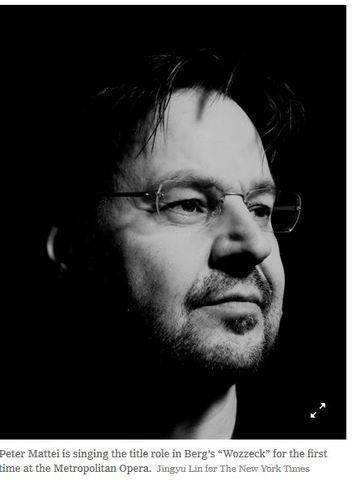 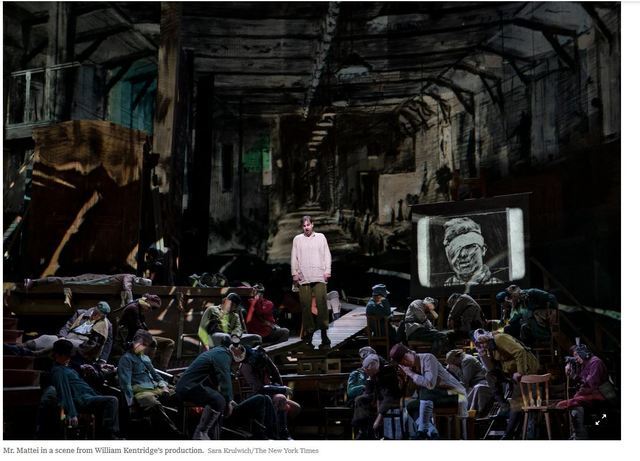 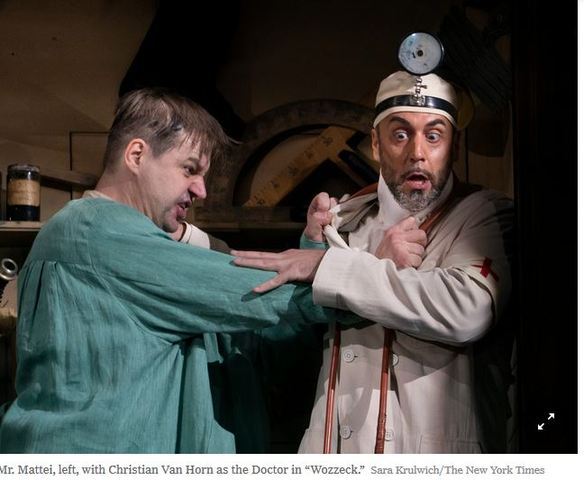 The suave baritone was cast against type in Berg’s harrowing work at the Metropolitan Opera. But he is winning raves.

It was a few days before the opening of Berg’s nightmarish “Wozzeck,” and a rehearsal had just ended on the stage of the Metropolitan Opera. As the crew began disassembling the set around him, Peter Mattei, the acclaimed baritone singing the title role for the first time, stayed onstage, negotiating his dying gesture with the director, the artist William Kentridge.


It was the kind of attention to detail Mr. Mattei is famous for. At 54, this Swedish baritone is considered one of the finest singing actors of his generation. His suave, mellifluous voice and intense stage presence have made him superb as Mozart’s Don Giovanni and Rossini’s Figaro, and a scene-stealer as Amfortas, the wounded king in Wagner’s “Parsifal.” But he was cast against type as Wozzeck, a soldier who is ground down by poverty and oppressed by sadistic authority figures before he descends into hallucinatory madness, murder and suicide.

It is a challenge for any singer to navigate Berg’s modernist score, which requires both lyrical beauty and haunted Sprechstimme, or sung speech. But Mr. Kentridge’s production — essentially a huge immersive art installation as well as a work of theater — needs a star who can hold the stage amid a phantasmagoria of projections evoking the horrors of World War I.


But Mr. Mattei’s first Wozzeck is winning raves. Anthony Tommasini wrote in The New York Times of his “burnished sound and aching sadness,” adding that, “while he was chilling in threatening bursts of half-spoken Sprechstimme, you sensed that this man’s life could have ended up differently.” In The Wall Street Journal, Heidi Waleson wrote that Mr. Mattei “never made an ugly sound as he limned Wozzeck’s deepening anguish and the progression of his madness.”

It was all the more remarkable because Mr. Mattei has been fighting an illness, and spent several days in bed with a fever before returning for his second performance on Thursday evening. After the curtain came down, to cheers from the audience, Mr. Mattei sat in his stocking feet in his dressing room and spoke of his road to Wozzeck. Here are edited excerpts from the conversation.


How are you feeling?

Doing it with this fever and this dizziness and tiredness made me go a step into the character that maybe I wouldn’t have found if I had not been sick. So it’s an interesting journey into the role. When you get sick, your emotional pattern changes. It becomes: I need some water because I’m thirsty. The brain is going for the quick solution. And that was maybe a good experience.

I took time away from opera so I could do a little bit every day. This is not something you want to force yourself to do too quickly. It is not because you can’t learn it quicker. It’s because the longer you spend with it, the more you have payback.

To do it with the music in front of you is one thing. To do it without the music in front of you, with the pianist, is one thing. And then the orchestra comes, and you stand and you hear things that you never heard — and things that you want to hear you don’t hear — and you’re totally lost again. You don’t feel the rhythmic structure that you heard on the banging piano. And then you do it onstage and you hear nothing — you’re so far away and you’re just up there and alone. You need a kind of secureness for that long journey — almost like an instinct.

How do you view Wozzeck? I’ve seen productions in which he seems crazed from the first scene to the last. But you seem to have a development in mind.

I think it has to be a journey. Otherwise I think it is too easy. William never wanted him to be mad. At one point he thought I was too mad; he wanted me to be more in control of the anger. I was prepared to shave my head, and to do much more with my appearance, but I still look pretty much like I do. It is not so difficult to destroy a life — with some war, post-traumatic stress and things like that.

You gave him a real nobility or dignity in the first scene, when he stands up to the Captain and tells him that the poor can’t afford morals.

For me, the most difficult thing is why he speaks at all — a guy who has been treated like Wozzeck for all his life. I can see Wozzecks being silent all the time. Maybe they kill, in anger. But this philosophical side of him is something that’s very rare. In a way he’s almost like an intellectual. And that, I find fascinating. I think that he had, some years before his parents died, a normal upbringing. He’s much cleverer than the jerks surrounding him.


I want to show you something. [He took out a smartphone and pulled up an image of a distinguished looking man: Johann Christian Woyzeck, the soldier whose 19th-century murder trial inspired the play on which “Wozzeck” is based.] That is the real Wozzeck.

Are there aspects of the story that you think resonate particularly in this moment?

It’s so many power layers, and split nations, and people who are abusive. We have also taken away, at least in Sweden, all the mental hospitals. People are sent back into the streets, and live under bridges. Probably you have a lot of Wozzecks from different kinds of wars. The only treatment they get is they have to stay under a bridge, and go through the garbage to find something to eat. There’s no security net any more, not even in a country like Sweden.

So when you look at it like that, there are really a lot of Wozzecks going around, and we are doing horrible things to each other.