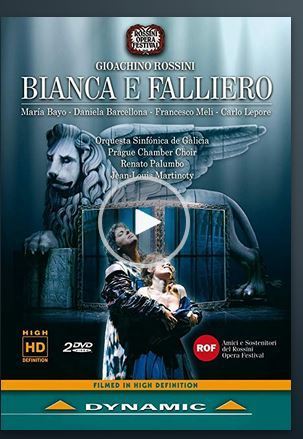 I've been so busy with US political news this week opera has been neglected. However today a relatively traditional production of this opera-lovely music, nice singing, captions in English,$3.99 c/o Amazon Prime. Still the opera itself is imo shakey-still great to have seen it under these circumstances. Regards, Len

"Bianca e Falliero is the thirtieth in the 39 titles in the Rossini operatic oeuvre. It was the composer’s fourth opera of 1819 and was written to a commission from La Scala, Milan, to open the Festival Season on 26 December of that year. Given that pace of composition, which the composer was never to repeat, it sports remarkably few self-borrowings. The first night audience were generally enthusiastic and the work was given a further 39 performances that season, the longest run ever for any Rossini opera seria at La Scala. It went on to be staged throughout Italy and was presented in Vienna and Lisbon, in 1825, and Barcelona in 1826. It was revived at La Scala in 1831 in a butchered form and after performances in Sardinia in 1846 it disappeared only being heard again in semi-staged performances at the Pesaro in 1986. Like the previous recordings this one uses the Critical Edition by Gabrielle Dotto based on the autograph full score of 1819....Politicians are always selling the virtues of choice. With this recording lovers of Rossini’s works now have that in respect of Bianca e Falliero. Live performances always seem to have an extra frisson, but have the drawback of stage noise and the intrusion of applause. Stage noise is not intrusive here and the applause, whilst enthusiastic, is not raucous. This recording is welcome for its own strengths as well as for the choice it gives in an opera that was the last Rossini wrote for La Scala and into which he put great creativity.

Users browsing this forum: No registered users and 23 guests