‘Das Barbecü’ Is Wagner’s ‘Ring’ With a Side of Brisket

‘Das Barbecü’ Is Wagner’s ‘Ring’ With a Side of Brisket

We elected not to go to this-still the description of the food made me hungry. I see it will be on until Feb 11 and do wonder how their brisket compares to that you get at Fairway or Zabars! Len [grin] 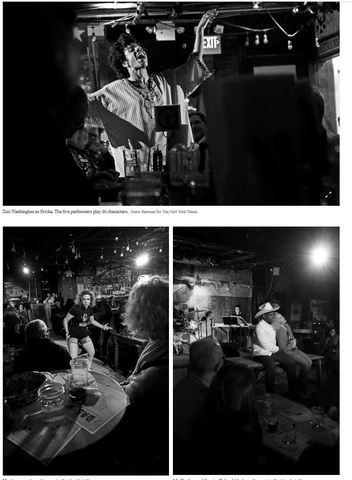 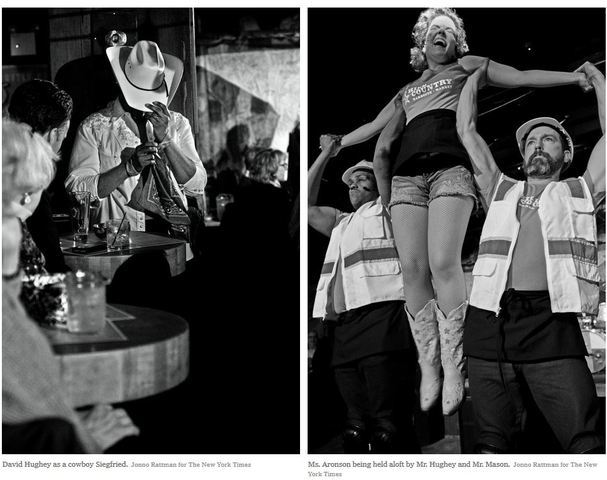 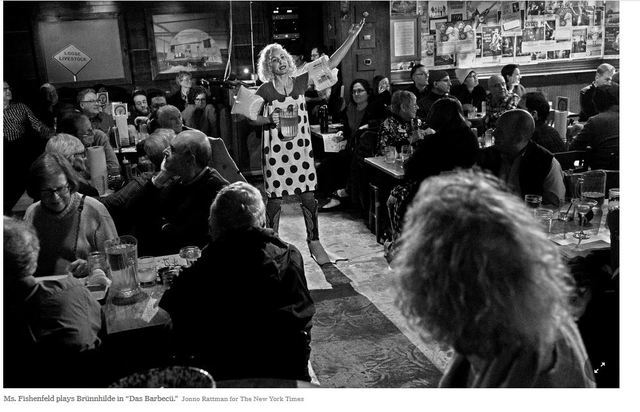 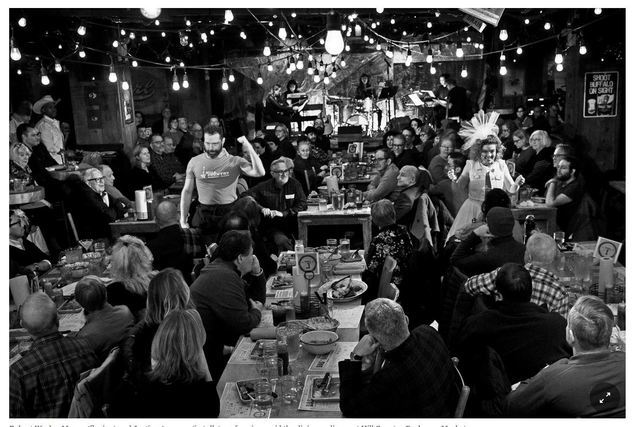 Review: ‘Das Barbecü’ Is Wagner’s ‘Ring’ With a Side of Brisket

This country-western parody of the operatic epic is set amid dining tables at a Manhattan barbecue restaurant.

With its weighty music and complex symbolism; its tangled story of gods, greed and magic; and its epic length, Wagner’s “Ring” cycle has invited parodies from the start.

All kinds of comics have taken the bait. In the classic cartoon “What’s Opera, Doc?,” Elmer Fudd chortles “Kill the wabbit” to the “Ride of the Valkyries” melody as he pursues Bugs Bunny. The comedian Anna Russell’s droll summary of the convoluted plot of the “Ring,” in which she sings excerpts at the piano, is still priceless after nearly 70 years.

Many Wagner devotees actually enjoy a good “Ring” satire, perhaps because we admit that, however compelling, its giants, river maidens and dwarfs are a little laughable.

The best thing about “Das Barbecü” — a musical theater piece with book and lyrics by Jim Luigs and music by Scott Warrender, first presented in 1991 by the Seattle Opera — is that it tries to be more than just a parody. Wagner’s story is reset deep in the heart of Texas, with Wotan as a powerful rancher, Siegfried as a guitar-strumming cowboy, and Brünnhilde as a sassy cowgirl.


On Sunday the enterprising On Site Opera company, which presents scaled-down versions of works in site-specific settings, opened a run of “Das Barbecü” in an ideal location: Hill Country Barbecue Market in Chelsea. Five singers portrayed the 30 characters, including most of those who appear in Wagner’s original and a few additions, like some rangers and busybodies. The production, directed by Eric Einhorn and Katherine M. Carter, certainly captured the piece’s manic energy.

But now and then, this “Barbecü” drew out the affecting emotional strands of Wagner’s cycle in playful or poignant ways. If only more had been made of these moments, by both the creators and the cast. For example, there’s a scene in Act II when Siegfried (the dynamic David Hughey) is cuddling with Brünnhilde (the bright-voiced Jessica Fishenfeld) on Mesa Rock, the fire-surrounded mountain atop which her father had placed her years before.

“You must’ve done somethin’ awful bad to get stuck out here all by your lonesome,” he says. After a moment, she answers, “I tried to help a man who needed helpin’.” She doesn’t want to talk more about it. So they sing a cozy country-style love duet, “Slide a Little Closer.”

Mr. Luigs’s lyrics are often breezy and clever, and Mr. Warrender’s music, at its best, has verve and melodic grace. The instrumental combo, conducted by the music director Emily Senturia, includes a fiddle, guitars, keyboards and drums, but the style is mainstream Broadway. (This is a country music score in the same sense that “Hair” is a rock score.)


I wish Mr. Luigs and Mr. Warrender had aimed higher and gone deeper with their insights into the “Ring.” As it is, “Das Barbecü” is bent on giving the audience a good time. And with the singers sliding between rows of dining tables, the audience certainly gets mixed up in the fun. The main problem is that the work, running over two hours, feels padded. There are way too many songs, some of them light and slick. It’s a classic case of a piece that would be twice as good if it were half as long.

It begins with the five cast members singing a rousing, countrified fanfare setting up the tale: “There’s a ring of gold in Texas,” they sing, a ring of stolen gold that’s been “hot since hell was cold.” We first see Wotan (the barrel-chested Robert Wesley Mason, with a voice to match) trying to sneak past Fricka (the appealing Zuri Washington) into Valhalla, carrying his boots after a night of carousing. She is tending to her topiary garden and resents being left alone in her new home, which she calls a “cartoon of ostentatious Texas vulgarity.”

When Wotan mentions the latest news about the magic ring, Fricka scornfully notes this is just another “treacherous new twist to add to your record of ring-chasin’ mayhem.” (That’s actually a good description of what drives Wagner’s Wotan.)

One running story line pits Brünnhilde against Gutrune (the lively Justine Aronson) as rivals for the confused Siegfried, who eventually realizes he has pledged to marry them both. Decked up in cowgirl-bridal tulle, Gutrune seems the more formidable of the smitten women, by far. At the same time, Brünnhilde is being foisted on Hagen (Mr. Mason), portrayed as a narcoleptic brute who’s haunted by his father, Alberich (Mr. Hughey).


The two women see Siegfried and Hagen as typical Texas-two-timing men. But the guys, in a resonant moment, try to make it clear that Gutrune and Brünnhilde might actually like each other, if they gave it a chance. Again, some suggestion of the women’s mutual understanding also comes through in Wagner.

There are enjoyably antic bits, as when the three future-telling Norns, wielding pieces of their broken rope, sing a trio offering sage advice to women to “hogtie your man.” But the rare moments when the characters turn inward stand out, like the reflective song Brünnhilde delivers at a country fair, musing that a man cannot be counted on.

Though the show is way overextended, patrons can watch while sitting at the bar or, better yet, dining at a table. And the brisket, roast chicken, mac and cheese and cornbread are worth it.