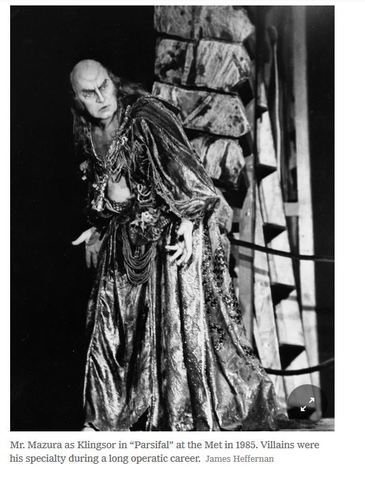 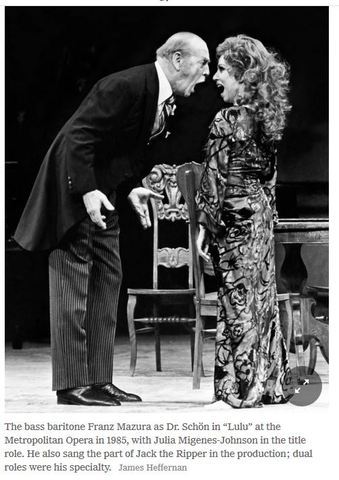 Franz Mazura, an Austrian bass-baritone best known for his compelling portrayals of operatic villains in a late-starting but long-lasting career that brought him to many of the world’s major houses, died on Jan. 23 in a hospital in Mannheim, Germany. He was 95.

His death was announced by his management company, Boris Orlob. He had lived in the nearby town of Edingen-Neckarhausen.

Mr. Mazura’s earthy, deep-set voice was ideal for the dark, menacing characters he specialized in. During his prime years he excelled as Klingsor, the evil sorcerer in Wagner’s “Parsifal,” and Don Pizarro, the corrupt governor of a state prison in Beethoven’s “Fidelio.”

He helped make opera history in 1979 when the first production of Berg’s “Lulu” in its three-act version was presented in Paris. (The unfinished third act was completed and edited by Friedrich Cerha.)

Mr. Mazura sang the double-role of Dr. Schön, a morally bankrupt and lecherous newspaper editor, and the murderous Jack the Ripper. He appears on both the recording and the video of this landmark production, directed by Patrice Chereau and conducted by Pierre Boulez.

Mr. Mazura became renowned for these dual roles, which he sang in 1980 for his well-received Metropolitan Opera debut, conducted by James Levine. His Dr. Schön “dominated the stage” both for “acting and for clarity of enunciation,” the critic Patrick J. Smith wrote in Opera magazine. This Dr. Schön was “truly a powerful figure eaten from within,” Mr. Smith continued, and the “cold mania” of his Jack the Ripper was “equally chilling in its impact.”

He was also known for his sneering, nasal-toned portrayal of Alberich the dwarf in Wagner’s “Ring” cycle. Reviewing a 1981 production of the cycle’s “Das Rheingold” at the Met, the critic Bill Zakariasen wrote in The Daily News that Mr. Mazura was “as fine an Alberich as I have witnessed,” and praised his “potent voice,” “venomous, yet human” presence and “gnarled appearance.”

An imposing figure onstage, Mr. Mazura brought ominous intensity to the darkly buffoonish role of the Doctor in Berg’s “Wozzeck” and to the sadistic police chief Scarpia in Puccini’s “Tosca,” one of several parts typically sung by baritones that were in his repertory.

He played some decent characters as well, like the suffering Gurnemanz in “Parsifal” and the noble King Marke in Wagner’s “Tristan.” He even adapted his skills to lightly comic roles, like Frank in Johann Strauss’s “Die Fledermaus.” But the bad guys were his favorites, as he said in a 2017 interview with Neue Presse in Germany.

What made evil roles wonderful were the characters’ many facets, he said, adding that critics had praised him “for the bad things” he brought to these parts. But his wife, he noted impishly, always said that he didn’t play at it — that he just “thought he was at home.”

Franz Mazura was born in Salzburg, Austria, on April 12, 1924, the oldest of five children. His father, also Franz, was a tax inspector; his mother, Maria, a homemaker. The family lived in Eisenstadt and later Vienna.

Mr. Mazura originally studied mechanical engineering before going into the German navy during World War II, serving first on a submarine and then on the heavy cruiser Admiral Scheer. After the war, on his own in Germany, he studied draftsmanship and, through an acquaintance, took up singing.

He studied voice in Detmold during his late 20s and started performing in his early 30s, but did not appear at major houses until his early 40s. He was 47 when he made his debut at the prestigious Bayreuth Festival in Germany, in 1971, singing Gunther in Wagner’s “Gotterdammerung.” He continued a close association with Bayreuth through 1995.

Mr. Mazura married Elisabeth Friedmann, a singer, in 1957. She died in 2016. He is survived by their son, Martin; their daughter, Susanna Mazura-Grohmann; a brother, Heinrich; a sister, Irene Berger; and a grandson.

By the late-1980s critics were noting that Mr. Mazura’s voice had become rough and patchy. In later years he became an opera world equivalent to a character actor onstage and screen. But he continued to have presence and vocal fortitude.

He kept performing almost to the very end. Last April, he rang in his 95th birthday while performing the small role of Hans Schwarz in Wagner’s “Die Meistersinger von Nürnberg” at the Berlin State Opera, a production conducted by Daniel Barenboim.

Interviewed at the time he attributed his longevity to regular vocal exercises, good sense and good genes, noting that he had recently dined with a 106-year-old aunt.