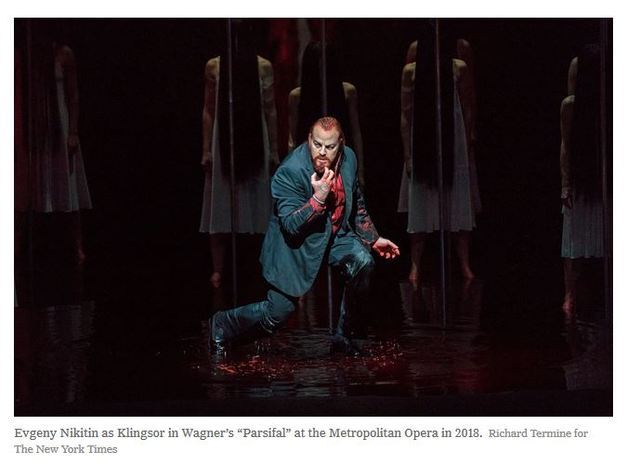 When the star bass-baritone Bryn Terfel broke his ankle last month and withdrew from the Metropolitan Opera’s upcoming new production of Wagner’s “Der Fliegende Holländer” (“The Flying Dutchman”), it left the company with a big hole to fill, five weeks before opening night on March 2.

But the Met announced on Tuesday that it had found its new Dutchman: the Russian bass-baritone Evgeny Nikitin. Mr. Nikitin has appeared at the Met recently in several Wagner operas, including as Kurwenal in a new “Tristan und Isolde” that opened the season in 2016; as Klingsor in a “Parsifal” production directed by François Girard, who is also staging the new “Holländer,” in 2013 and 2018; and as Gunther in “Götterdämmerung” last year. This past New Year’s Eve, he appeared in a gala performance as Scarpia in Act I of Puccini’s “Tosca,” opposite Anna Netrebko.

But anchoring the new “Holländer” and filling in for Mr. Terfel — a beloved star who was supposed to be returning to the company for the first time in nearly eight years — will be Mr. Nikitin’s highest-profile assignment yet at the Met.

Mr. Nikitin was also at the center of another closely observed “Holländer” cast change. In 2012, he withdrew days before he was scheduled to sing the opera’s title role in a new production at the Bayreuth Festival in Germany, after a video of him surfaced showing a tattoo resembling a swastika on his chest. Mr. Nikitin later said that the tattoo was never meant to be a swastika, and was in fact part of a heraldic crest in an eight-pointed star that was left unfinished.

The Met’s production, also starring the soprano Anja Kampe in her company debut as Senta, will be conducted by Valery Gergiev. Mr. Gergiev was on the podium when Mr. Nikitin made his Met debut in 2002, in Prokofiev’s “War and Peace,” which was also Ms. Netrebko’s first performance with the company.

I remember the controversy over Nikitin's tattoo not too long ago, and thought at the time that he was treated unfairly in the press. Glad things are working out for him. I do hope that this production will be televised eventually. That said, I have never seen the tattoo in question.....
Top

Thanks, Len. The original tattoo (when he was a drummer) looks pretty damning, but he covered it up later with a six-pointed star, which to me shows that he's asking for forgiveness for a youthful indiscretion. Seems to me he's seen the light, and should be supported in that decision.

Again, I hope the production is telecast so we can see it.
Top

Never understood the appeal of tattoos, and that's partly why. What you want on your body in your youth, which is when most people get them, is highly unlikely to survive into middle age.
Just put it on a T-shirt!