From a Veteran Singer to a Newcomer, a Note of Welcome

From a Veteran Singer to a Newcomer, a Note of Welcome 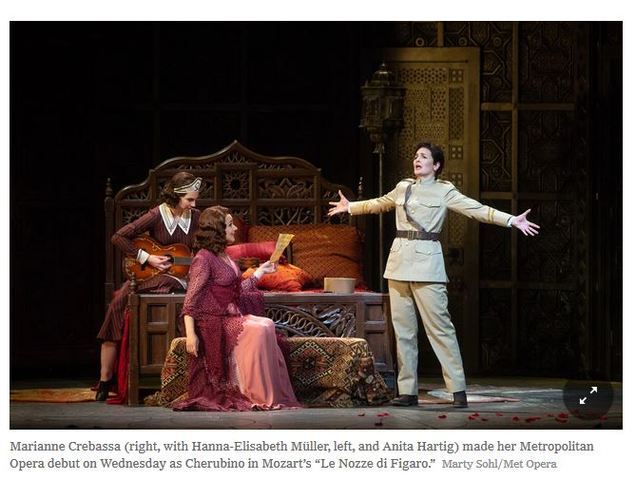 Review: From a Veteran Singer to a Newcomer, a Note of Welcome

In opera, the drumbeat of time is written on — and in — the body. Vocal cords grow brittle; high notes start to quaver; low tones hollow out. Singers have to retire the roles of their youth, and eventually retire altogether.

But not yet: Nine years ago, the American mezzo-soprano Susan Graham told me she hoped she had 10 more years of singing in her. Heard on Tuesday at Alice Tully Hall, and turning 60 in July, she sounds like she could easily go another decade.

As it happens, the following evening Marianne Crebassa, a lively 33-year-old French mezzo, made her debut at the Metropolitan Opera, just across the street from Tully, as Cherubino in Mozart’s “Le Nozze di Figaro.”

As Ms. Graham explained from the stage with the easygoing charm that also marks her singing, her program, organized by and performed with the sensitive pianist Malcolm Martineau, took Schumann and beefed him up. The eight songs of his “Frauenliebe und -leben,” describing the course of a romance and marriage, were each accompanied by thematically relevant additions from other composers, languages and periods. Little sets of songs about falling in love, about weddings, about mourning: You get the gist.

The eight-chapter result was something like the stereotypical young-artist recital — which places a premium on stylistic and linguistic versatility — on steroids: Ms. Graham performed 29 songs in eight languages by 17 composers. (It should be noted, given the subject matter, that all were men.) She cast in a uniformly honeyed glow all the quick transitions from English to French, French to Spanish, German to Danish to French.

Ms. Graham, as ever, walked a delicate line between worldliness and earnestness. Even the evocations of a new crush were rendered with the gently open eyes of maturity; expressions of joy and loss alike emerged from the balanced perspective of a healthy, happy middle age. Ms. Graham exuded a sense of experience, even as her sound remains fresh — its soft, silky texture still airy and smooth.

She seemed comfortable in all eight languages, and crystal-clear in English, but she always brings to French the subtlest relish, so songs by Fauré, Duparc and Debussy were highlights — sensual but never heavy, serene but never dull.


While Ms. Graham’s most recent runs at the Met found her voice’s quality undimmed, its power had faded a bit in the theater’s vastness. But Ms. Crebassa’s silvery shimmer projected clearly and cleanly on Wednesday.

Gamine and nimble, her Cherubino was spirited without being overplayed, in a genial revival of Richard Eyre’s production that runs through Feb. 22 under the bright, vivid baton of Cornelius Meister. (Listen to the third-act wedding march, its aristocratic polish undergirded by rustic zest in the low strings: the opera’s clashing-classes plot in miniature.)

The cast seemed like a well-practiced ensemble, at ease with the piece and one another. Hanna-Elisabeth Müller was a coolly sweet Susanna; Etienne Dupuis, a sturdy if often oddly benign Count Almaviva; Adam Plachetka, a blustery Count at the Met in the fall, now better cast as a vigorous Figaro. Only Anita Hartig faltered, struggling with the long lines of the Countess’s classic arias.

It was a group whose youthful energy brought to mind Ms. Graham’s encore the night before: a graceful rendition of “Hello, Young Lovers” from Rodgers and Hammerstein’s “The King and I.” In what Ms. Graham called the “ninth chapter” of her “Frauenliebe und -leben” story, the singer moved from protagonist to observer, watching a new generation experience what she did, many years before.

I imagined the tune wafting across 65th Street, a song of welcome to Ms. Crebassa.