The Met Opera Is Handel’s House in ‘Agrippina’

The Met Opera Is Handel’s House in ‘Agrippina’ 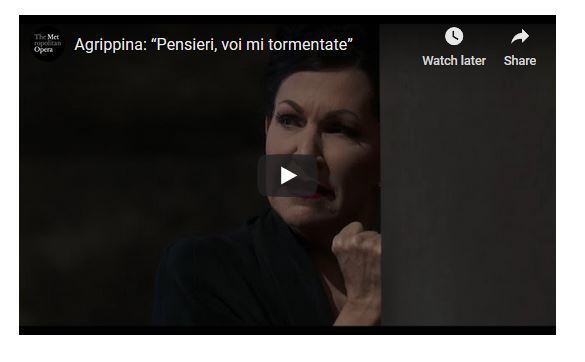 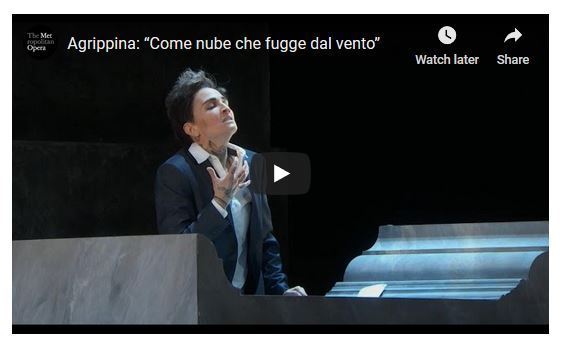 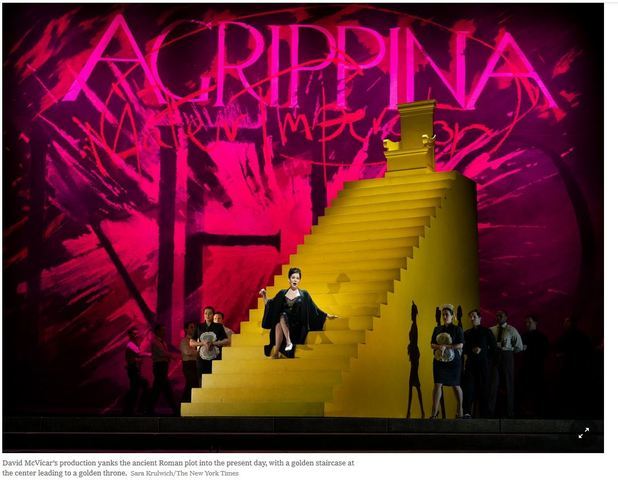 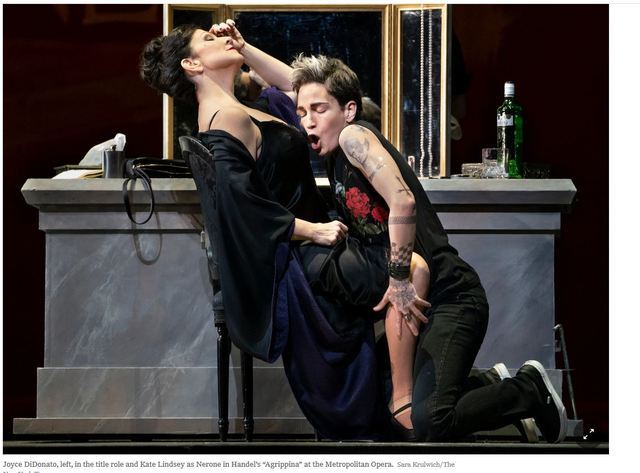 Review: The Met Opera Is Handel’s House in ‘Agrippina’

When talk turns to whether the Metropolitan Opera should put on old works — like 1709 old — habits die hard. The story has been told for decades that intimate Baroque operas will vanish in the vast Met. Modern audiences won’t want to sit for hours through parades of static arias and confusing plots.

During intermission at the company premiere of Handel’s “Agrippina” on Thursday, I ran into an acquaintance in the lobby who said that he was enjoying the show. “But of course,” he added, gesturing back toward the 3,800-seat theater, “it’s way too big.”

I beg to disagree.

This “Agrippina” — yanked from ancient Rome into a deliciously bleak vision of our time, played with electric vividness, and starring a guns-blazing Joyce DiDonato — should put to rest, once and for all, the notion that Handel belongs at the Met less than Verdi, Puccini or Wagner. Bold, snicker-out-loud funny, magnetic and unsettling through its power-struggle convolutions, this production musically and dramatically fills the company’s looming proscenium. It’s begging to be enjoyed with a bag of popcorn — or with a martini packing some of the work’s frosty heat.

Handel was lucky to get, in Vincenzo Grimani’s gleefully wicked text, that rarity in opera history: a libretto with dramatic focus, ambivalent characters and worldly humor. (The genre isn’t known for dark comedy.) Three centuries on, “Agrippina” remains bracing in its bitterness, with few glimmers of hope or virtue in the cynical darkness. But it’s irresistible in its intelligence — and in the shamelessness it depicts with such clear yet understanding eyes.

The story is ostensibly about the Roman empress Agrippina’s ferocious machinations to get her husband, Claudius, to cede the throne to her vastly unqualified son, Nero. Her obstacles — sometimes co-opted as pawns — include the beautiful Poppea; the noble, lovelorn general Otho; and a couple of bumbling courtiers.

But the audience at the premiere in Venice, for what turned out to be the first big hit of Handel’s career, would have known that the satire was directed at Grimani’s political enemies, including the pope, just as much as at the amorality of the ancients. Even in the early 1700s, this was recognized as a work with contemporary reverberations.


So in 2000, when David McVicar first directed this “Agrippina” in Brussels, it made sense for him to update those reverberations — and to make them explicit, rather than the subtext. His Agrippina stalked the stage in a power suit; Nero was a slouching, sullen teenager; there was carousing at a stylish bar, complete with cocktail harpsichordist. Yet the characters began and ended the performance on plinths inscribed with their names: This was a staging antique and modern at once, with surreal touches of synchronized choreography, bits of slapstick and a central golden staircase rising to a golden throne, the prize everyone is climbing toward.

That first run made certain critics think of ruthless politicians of the then-recent past, like Margaret Thatcher and the Clintons. Twenty years later — with the production’s arrival at the Met, the addition of smartphones for onstage selfies and the relaxation of some aggressive late-’90s shoulder pads — the figures brought to mind by this tale of decadence and self-enrichment have inevitably changed.

Skittish Met board members fearing a reprise of the Public Theater’s incendiary depiction of a President Trump-like Julius Caesar being stabbed in a 2017 Shakespeare staging need not fear. There is nothing overt about the president in this “Agrippina” — save, perhaps, a scene with a golf-playing emperor that actually dates back to Brussels.

Yet the relentless grasping after dominance that’s on display — as well as the mezzo-soprano Kate Lindsey’s gymnastically raunchy, coke-addled portrayal of Nero (Nerone, in the opera) — does evoke something of the riveted disorientation endemic to our time of, ahem, norm-breaking. Without being too blatant, this “Agrippina” does get at the emotional climate of a disruptive era, the clenched-jaw feeling you may well get as you wait for the New York Times app to load on your phone. You don’t want to look; you can’t look away.

Conducting from the harpsichord, Harry Bicket kept the pace crisp and headlong on Thursday; trimmed a bit, the score pressed forward as spiritedly as the characters’ pursuit of their selfish aims. There was forward motion even in arias of slow loveliness; the dialogue crackled.

Mr. Bicket has already led Handel’s “Rodelinda” and “Giulio Cesare” at the Met. He knows how to guide the company’s orchestral forces in a style that’s not its standard repertory, and the result is an appealing paradox: both beefy and lithe. The textures have the glinting clarity of a Baroque ensemble, but also a richness that fills the huge house.

The orchestral work is more consistently brilliant than the singing. Ms. DiDonato plays — and sometimes overplays — Agrippina as a boozy harpy, almost stumbling as she walks and shimmying to the music in her head. Under pressure, the top of her voice can grow pinched and strident.

But a little lower down, her tone is vibrant and articulate, with a steely core. And she offers tantalizing glimpses of Agrippina’s doubts. Her posture is ever so slightly stricken after she’s misled Claudius into decrying the faithful Otho as a traitor. Her aria “Pensieri, voi mi tormentate” is a commanding combination of lines dripping fire with floated high wires of sound. Her final moment in the staging, wondering where her venality has finally brought her, shows her hilariously and poignantly unwilling to return to the annals of history — that is, to die.

Ms. Lindsey — groping herself and anyone she can get her hands on, her voice sometimes overwhelmed in fast passages but sly in moments of otherworldly softness — is an indelible caricature as Nero. She practically oozes across the stage, at one point singing an aria verse in a side plank position that made my abs hurt just watching it.

Iestyn Davies’s gentle-textured, oboe-like countertenor is perhaps lighter and blander than the female contralto Handel envisioned for Otho (Ottone), but he brought the first half of the production — which ends in the middle of the score’s second of three acts — to a mellow close with the stately despair of “Voi che udite.”


Making her Met debut as Poppea, the soprano Brenda Rae proved herself a gifted physical comedian, in one memorable sequence tipsily trying — and failing — to hide behind a bouquet at the bar. Her highest notes pop into the theater. But her voice is otherwise narrow and sometimes nearly inaudible. In another debut, the countertenor Nicholas Tamagna was a brightly insinuating Narcissus (Narciso); the bass Matthew Rose was a convincingly bluff Claudius (Claudio).

After a general sense of vocal unease in the first half, the performance seemed to settle in, gaining some confidence after intermission. But even then, the cast didn’t fully meet the virtuosic and sensual demands of this music. The singers were fearless on Thursday, but that’s not all they need to be.

That this “Agrippina” was nevertheless a success — indeed, a devilish delight — is because of Mr. Bicket and Mr. McVicar. And, of course, Handel. Yes, he died more than 250 years ago, but at the Met he seems more vital than ever.

Love Handel's operas. Vocal pyrotechnics are right up my alley: they can only be sung by voices with totally secure technique (see also Rossini), and assembling a credible cast, even in this golden age of HIP music-making, is no mean feat. I have no recordings with Bicket conducting: perhaps I'll have to remedy that.

Having sung Messiah more than 50 times, it still took me a while to warm to Handel's operas, but when we saw Rinaldo at the MET with Marilyn Horne and Eva Podles in the 1980's, I was totally hooked, and have been greatly in favor ever since. Kudos to the MET for mounting this (I assume) for Joyce DiDonato, one of the world's greatest singers currently in her peak years. Another production I would love to see televised!
Top

Thanks, Len, but I meant on cable (PBS) so I can record it for my library.

Brian I'll keep my eye out for it-I have a feeling it will show up. Regards, Len
Top
Post Reply
5 posts • Page 1 of 1