I had never heard of this composer-it's a nice story. Regards, Len 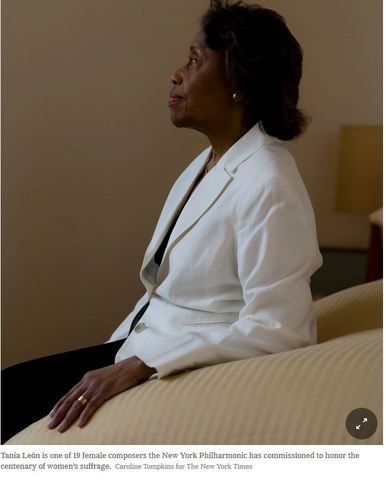 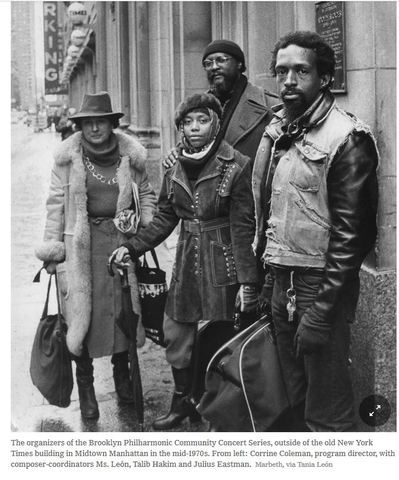 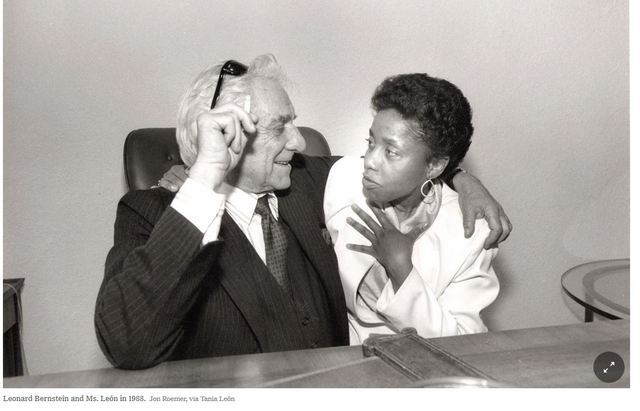 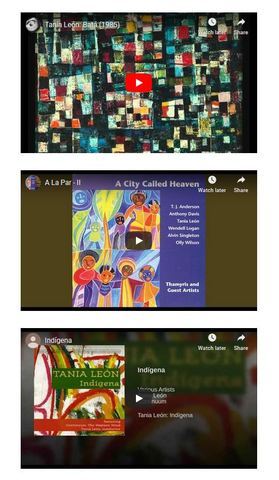 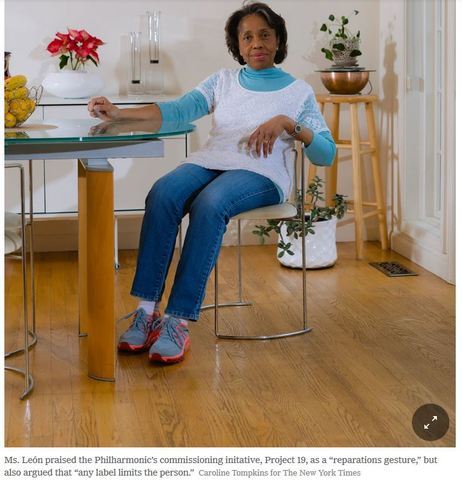 She was supposed to end up in Paris.

When the composer Tania León was 9, her piano teacher, traveling in France, sent a postcard back to Cuba with a picture of the Eiffel Tower. “I don’t know what happened to me when I saw the card,” Ms. León, now 76, said recently. “I went to my family, and I said, ‘This is where I’m going to live.’ And I became obsessed.”

A few years earlier, her intrepid grandmother had marched her to the local music conservatory in Havana and demanded that she be enrolled. They didn’t usually take students so young, but Ms. León already showed promise: Even at 4, she would press against the radio at home, dancing to salsa and singing along, with perfect pitch, to the classical station.

Following rigorous, European-style conservatory training, and inspired by her teacher’s postcard, the young pianist set her sights on France, intent on becoming a touring virtuoso and helping lift her family out of poverty. After years of waiting, she landed a free flight to the United States through a resettlement program. In 1967, at 24, Ms. León left for Miami, intending to travel on to Europe.

But right before boarding the plane she learned that she would not be permitted to return to Cuba, and upon entering the United States, she discovered that she would have to stay at least five years before she could apply for citizenship. She was trapped, a citizen of nowhere.


But she soon reached New York, where she began carving out an unusually varied artistic path and resisting, even at a time of increasing focus on multiculturalism, the identity-based labels — “black composer,” “female conductor” — that others sought to attach to her.

She eventually served as the New York Philharmonic’s new-music adviser in the mid-1990s. Although she curated the Philharmonic’s American Eccentrics series and conducted educational concerts, the orchestra, which had a weak record with composers of color at that time, stymied some of her projects and never actually played her music.

But this week she finally arrives at the Philharmonic, with the premiere of her work “Stride,” to be performed on Feb. 13, 15 and 18, under Jaap van Zweden. The premiere is part of Project 19, a multiseason initiative in honor of the centenary of the 19th Amendment, that has commissioned works by 19 female composers. Deborah Borda, the Philharmonic’s executive director in the ’90s, returned as president and chief executive in 2017, and was eager to finally program Ms. León’s music.

“Here we are,” Ms. Borda said in an interview, “coming back to an important artist and enfranchising her, over 20 years later.”


Ms. León’s trajectory in America, from displaced pianist-in-training to compositional force, began with upheaval. Not long after she arrived, the Rev. Dr. Martin Luther King Jr. and Senator Robert F. Kennedy were assassinated; Ms. León barely spoke English, but found herself shouting slogans at antiwar protests. She was overwhelmed with stress, and her hair began to fall out.

But propelled by talent, tenacity and a bit of luck, she began to reverse her fortunes. She played her way into a scholarship at the New York College of Music. Substituting for a friend as an accompanist to dance classes, she was spotted by the famed New York City Ballet dancer Arthur Mitchell. He was starting a new venture, the Dance Theater of Harlem, and recruited Ms. León as music director.

Soon, Jerome Robbins and George Balanchine were teaching Ms. León their repertoire. “What freaked me out the most,” she recalled with a laugh in an interview in the Philharmonic’s archives, poring over old program booklets and photographs, was “when I found out that Stravinsky was alive, and that Stravinsky had written three or four ballets for Arthur Mitchell.”


At Mitchell’s behest, she began conducting, improvising and, increasingly, composing. Her tendency was to say yes to every opportunity, and not fret too much about what it might entail. “People that I respect a lot, they tell me something seriously and I think about it, but I don’t become negative,” she said. “He told me, ‘Write a piece.’ And I said, ‘Wow.’ So I wrote the piece.”

She honed her voice in large-scale, percussive dance works that dabbled in the serial techniques in vogue in the 1970s. The Dance Theater became an international sensation, and its tours even took her, finally, to Paris.

At last she was able to return home, through a Cuban government family reunification program. Visiting Havana in 1979, she went first to the cemetery to see her formidable grandmother, who had died while she was abroad. She played recordings of her new compositions for her father, who remained skeptical.

“He told me, ‘Where are you in your music?’” she recalled. “He knew something about me that I was not addressing in my sound.”

To remind her of her roots, her father took her to a Santería ceremony, where she heard the polyrhythmic music that she had absorbed growing up, but which had remained absent from her early professional work.

She returned to the United States, and soon after, her father suffered a stroke and died. Visa issues kept Ms. León from attending his funeral. She began having nightmares in which she heard pounding drums. She was working on a piece for solo cello, and started to sketch out a movement based on her father’s rhythmic gait, in the style of a syncopated montuno. The grand mixture that is Cuban music — its intricate grooves, melodic inflections, arrays of drums — began flowing into her compositions.

A series of probing works followed through the 1980s and ’90s: “Batá,” with its eerie evocations of Yoruba rituals; “A la Par,” a piano-percussion duo that moves from murmuring chromaticism to a coolly contained guaguancó rumba; and “Indígena,” in which trumpet fanfares herald riotous explosions of orchestral color.

“I was searching myself, trying to address something,” she recalled of those years, describing it as a period of “trying to understand my own culture.” The music’s central impulse is a forceful, bustling modernism, with angular and pointillistic gestures undergirded by kinetic, perpetual motion.

She also became an outspoken advocate for cultural diversity. Alongside her pathbreaking career as a conductor, Ms. León spearheaded a pioneering outreach program at the Brooklyn Philharmonic and led community concerts across that borough. She oversaw major festivals of Latin American music with the American Composers Orchestra, served as music director of the Broadway production of “The Wiz,” and testified at city hearings about the integration of pit orchestras. Today, she directs the wide-ranging festival Composers Now, which is going on across New York through February.

But as her career unfolded, Ms. León bristled at attempts to define her. Her background is mixed — she has family roots in Spain, France, Africa and China — and the seemingly binary categories of race and gender circumscribed her individuality.

“I am tired of all our labels,” she said in 1986. “I am nothing that the people want to call me. They do not know who I am. The fact that I am using this physical costume does not describe my energy, does not describe my entity. My chosen purpose in life is to be a musician, a composer, a conductor. This is the way I am making my contribution to mankind.”

She saw herself as a global citizen, a cosmopolitan figure boxed in by categories that had confined people of color for hundreds of years. The scholar Alejandro Madrid, who is writing a biography of Ms. León, observed recently that this ethos was grounded in her arrival in the United States in the late ’60s, toward the end of the civil rights movement.

“Identity politics are very strong,” he said of that period, “and she never felt very comfortable with it.” He added, “The ambivalences she has about blackness come out of the specific experience of her being in New York at this time, and being always labeled something that she didn’t believe she really was.”

Ms. León’s position is largely the same today: She praised the Philharmonic’s Project 19 as a “reparations gesture” but also argued that “any label limits the person.”

“I honor all my ancestors in my skin, and in my character, and my presence,” she said. “But I don’t go around saying I’m Cuban-Italian, or I’m Cuban-French, or I’m Cuban-this and Cuban-that.”

Nearly two decades ago she moved to Nyack, a village on the Hudson River north of Manhattan, seeking more space. “I always lived in places where, every time I looked out the window, I was looking at someone else,” she said.

Today, Ms. León remains a bit astonished by the trajectory of her life and career. “I consider what happened to me to be a miracle,” she said. She attributes some of her success to mystical forces, adding: “I still talk to the spirits of my ancestors.”

Her music is still infused with a vigorous pluralism, although it is a bit more relaxed — less harsh, less busy — than her earlier efforts. (Little of her recent work has been commercially recorded.) The Philharmonic will present a Nightcap concert on Feb. 15 that explores her myriad influences, with guests including the jazz harpist Edmar Castaneda.

“Stride,” her new work for the orchestra, is inspired by two women: the suffragist Susan B. Anthony and the grandmother who was a major presence in Ms. León’s life — a progressive who embraced socialism as soon as it reached Cuba. “Stride,” unfolding in a series of fitful episodes — thickets of glassy strings, declamatory brass and contrapuntal juxtapositions that evoke Charles Ives — is both solemn and celebratory.

It is also aware of the racialized limits on the enfranchisement that women won a century ago. Its final moment offers a note of prophetic dissent: As two percussionists symbolically ring 19 tubular bells, a third plays a rhythmic pattern based on a clave from West Africa.

An earlier version of a picture caption with this article misidentified the location of the photograph. It is outside the old New York Times building in Midtown Manhattan, not outside the Brooklyn Academy of Music.

Re: A Composer Puts Her Life in Music, Beyond Labels

Users browsing this forum: No registered users and 67 guests