An Opera of Suffrage Gets Lost in the Museum

An Opera of Suffrage Gets Lost in the Museum 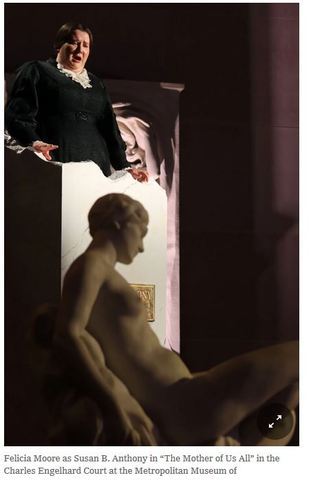 I'm glad we decided not to buy tickets for Mother of Us all at the Eastside Met-not the way we want to see an opera! Ironically today we plan on being at this museum as we start our 4 night stay in NYC. Len

Review: An Opera of Suffrage Gets Lost in the Museum

It makes sense to present Virgil Thomson and Gertrude Stein’s “The Mother of Us All” in a museum, because this 1947 opera is something of a museum itself. It’s a surreal, hilarious, poignant pageant about the battle for women’s suffrage that throws together American figures and situations from the 19th century — historical and fictional — with a musical amalgam of state fair, military march and parlor hymn. Watching it is like getting lost in a collection’s visible storage.

Where better to see it, then, than in the Charles Engelhard Court at the Metropolitan Museum of Art, the gateway to the Met’s American Wing? That’s where it is being performed through Feb. 14 as a collaboration of the Juilliard School, which supplied the talented cast; the New York Philharmonic, the sextet of musicians; and the MetLiveArts program, to celebrate the centennial of the 19th Amendment.

A glass ceiling soaring over a room defined on one wall by the limestone Greek Revival facade of Martin E. Thompson’s Branch Bank of the United States, the space conjures both this opera’s period inspirations and its modern perspective, its often cozy music and Stein’s inimitably gnomic, charming, moving text. Dotted with period-ranging American sculptures — some neoclassical, some pressing toward modernism — it looks the perfect fit.

But in a piece where the words matter even more than for most operas, the Engelhard Court was a problematic choice. You watch much of this atrium-size performance in the round, with the singers at any given moment facing away from you. They’re amplified, and there are supertitles, but the voices nevertheless bounce wildly off all the stone and glass, and lose some of their impact, even given uniformly crisp enunciation; the instrumentalists, far-off under the Branch Bank facade, sounded less snappy than they should.

The overall impression at the opening on Saturday evening was of grandeur rather than clarity — particularly given the lustrous, commanding soprano Felicia Moore, who sings Susan B. Anthony, not wrongly, like the heiress to Wagner’s Isolde and Strauss’s Ariadne. Ms. Moore scales down her gleaming voice for the work’s many intimate passages, but this is still an enactment of Susan B. as mythical goddess.

Yet despite the iffy acoustics, “The Mother of Us All” still makes its impact here, conducted by Daniela Candillari and directed by Louisa Proske. Parading on and around a raised central playing space, the youthful cast is apt for these agonized, lovelorn characters, particularly Chance Jonas-O’Toole as a plangent Jo the Loiterer and William Socolof as an implacable Daniel Webster.

With its stylized (almost abstract) interweaving of the romantic and public lives of its characters — its account of personal and political achievement as both resulting from endless, trudging struggle — the piece remains as fresh as ever. Each time I see it, it feels like it’s been ripped from the day’s headlines.


For example, Stein’s Susan B. on male politicians: “They fear women. They fear each other. They fear their neighbor. They fear other countries. And then they hearten themselves in their fear by crowding together and following each other.” And Senator Sherrod Brown, Democrat of Ohio, writing in The New York Times on Feb. 5 about the impeachment vote: “In the United States Senate, like in many spheres of life, fear does the business.”

Earlier milestones in women venturing into the public sphere were on offer Sunday afternoon, when the superb, shining British vocal ensemble Stile Antico performed “Breaking the Habit: Music by and for Renaissance Women” at Corpus Christi Church in Manhattan.

Presented by the invaluable series Music Before 1800, the program included rare examples of early women composers, including works by Sulpitia Cesis, Maddalena Casulana, Leonora d’Este and Raffaella Aleotti, a master of slow-bleeding harmonies who was responsible for what is called, in a program note, “the earliest publication by a nun — and the first pieces of sacred music credited publicly to a woman.”

These works were joined by others composed (by men) for three queens: Margaret of Austria and Mary I and Elizabeth I of Britain. Yet most tantalizing was an elegantly mournful song in French and Latin, its text and music possibly written by Queen Margaret herself.

This was, however many centuries late, a concert in which men and women were placed on equal terms. That struggle, like Susan B.’s, continues.

The Mother of Us All

Through Feb. 14 at the Metropolitan Museum of Art, Manhattan; metmuseum.org.

Users browsing this forum: No registered users and 100 guests