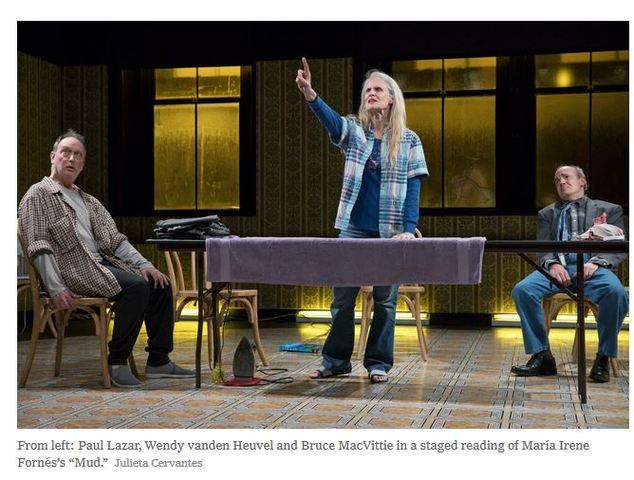 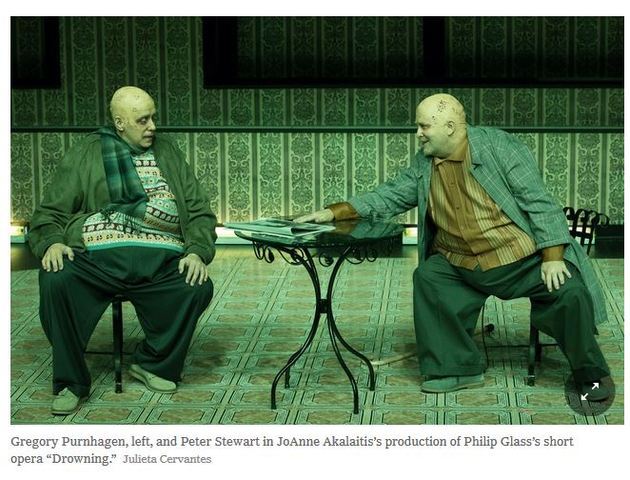 Review: ‘Drowning’ Is a Philip Glass Opera for Just 99 Seats

While Philip Glass’s works are now performed in grand halls, his latest New York premiere is playing in a 99-seat theater in the East Village. But if “Drowning,” scored for just three singers, one keyboard and one harp, is smaller in scale than “Akhnaten” or a symphony, it is no minor event.

JoAnne Akalaitis, one of Mr. Glass’s earliest and most important collaborators, has directed “Drowning,” a half-hour “pocket” opera setting of a short, surreal play by the Cuban-American playwright María Irene Fornés, a fixture of experimental theater who died in 2018.

In the 1970s, Ms. Akalaitis and Mr. Glass were among the partners in the theater collective Mabou Mines. They were also married at the time, and their artistic collaboration has long outlived their marriage. As has Mabou Mines: In the company’s staging of “Drowning,” which runs through March 7 on a double bill with a staged reading of Fornés’s “Mud,” Ms. Akalaitis proves that she still knows how to get the most out of Mr. Glass’s easily recognizable style. While some directors can be hypnotized by his churning, repetitive structures, providing stage pictures and character movements that progress as though on autopilot, Ms. Akalaitis finds moments to let subtle characterization come through.

Pea and Roe, the leads in Fornés’s enigmatic play, sit at a cafe table and ponder images they see in a newspaper: a beautiful woman; on another page, a snowman. Fornés describes these two characters’ eyes as “reddish and watery,” their necks and faces as festooned with warts. Ms. Akalaitis’s production, with makeup by Gabrielle Vincent, exaggerates the physical decline a bit, with the warts looking more like open sores.

Mr. Glass’s music at first underlines this graveness. But after Pea rises from the table to expound on the beauty of the woman in the newspaper, there is a brief, stirring aria — offering a ravishing glimpse of high hopes, and a contrast with the play’s air of lowered expectations and general decrepitude.

The baritone Gregory Purnhagen, who plays Pea, is a veteran of Mr. Glass’s operas; his lyric tone was eloquent throughout the performance on Saturday evening. Another stalwart Glassian, the bass-baritone Peter Stewart, brought appropriate world-weariness (and an occasional ironic edge) to Roe. The keyboardist Michael A. Ferrara and the harpist Lavinia Meijer collaborated on a flowing rendition of the music, handling some of Mr. Glass’s trickier syncopations with ease.


“Drowning,” a compact but notable addition to Mr. Glass’s substantial operatic oeuvre, has been paired with “Mud,” another work obsessed with infirmity and distinctly unquenchable romantic hopes. Like “Drowning,” it features a strong cast (the actors Giselle LeBleu Gant, Wendy vanden Heuvel, Paul Lazar and Bruce MacVittie), as well as some brief yet effective incidental keyboard music by Mr. Glass.

The humble production harkens back to the period in which Mabou Mines first flourished. But “Mud/Drowning” doesn’t come across as an exercise in nostalgia. The down-to-earth aesthetic instead helps emphasize the creative team’s commitment.

“The only life that seemed worthwhile for us was a life in the arts,” Mr. Glass once recalled in a New York Times interview about his early days with Ms. Akalaitis. “We never thought about how we would make a living.”

Their ticket sales are steadier than in those days, but the energy of this partnership remains vital.

Users browsing this forum: No registered users and 32 guests