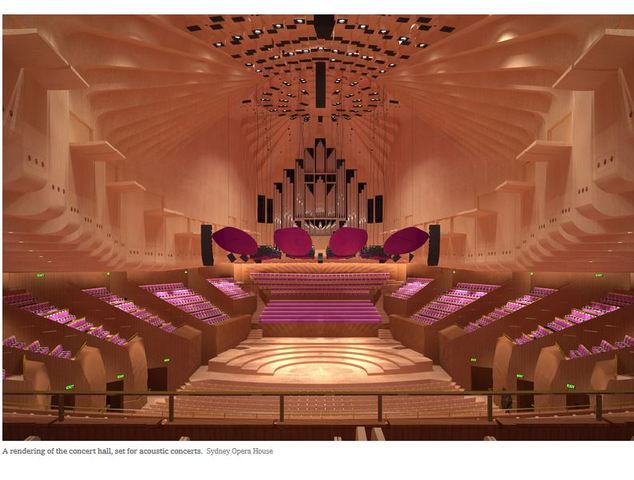 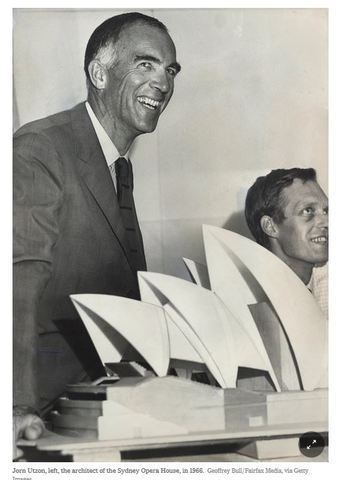 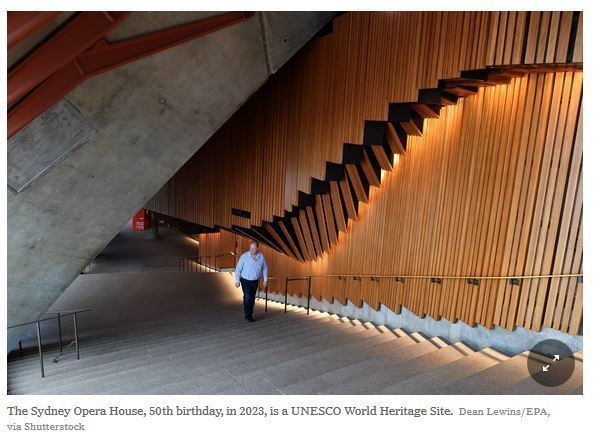 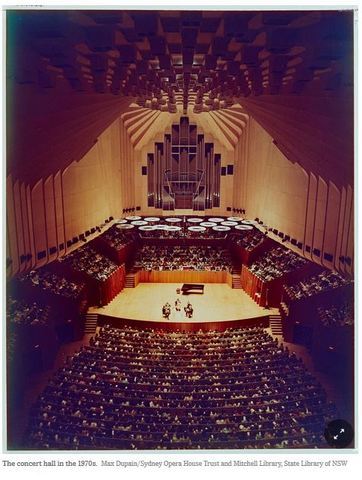 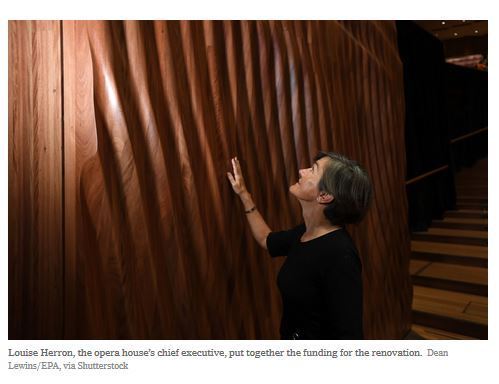 A renovation costing nearly $200 million has shut the famed theater for two years, the first closure in its history.

SYDNEY, Australia — Just after dawn one recent morning, Lou Rosicky was walking, slightly stooped, through a covered catwalk tucked just below the tip of one of the famous, towering concrete sails of the Sydney Opera House.

Around him was an almost impenetrable mechanical thicket — pipes, wires, machinery and conduit, all servicing amplifiers, control boards, lights, sprinkler systems, winches and cooling ducts. The feel? The gullet of a cyborg, circa 1964.

“The weight of history is everywhere in this building,” Mr. Rosicky said.

He is the opera house complex’s point man in a vast renovation project aimed at bringing all those innards up-to-date. The endeavor, budgeted at close to 300 million Australian dollars (nearly $200 million U.S.), culminated with the closure of the complex’s concert hall for the first time in its history. The hall has in the past been open 363 days a year, a point of pride, but it was shuttered in February for the start of a two-year upgrade.

Miles of wires and piping will be removed and replaced. Huge heating, cooling and electrical banks will be dismantled and relocated. Winches capable of holding four tons each will be placed above the auditorium’s ceiling, their movements fully digitized. New audio and lighting systems are being designed and installed.

As the building approaches its 50th birthday, in 2023, the interventions are necessary. While its architect, Jorn Utzon, is now widely recognized as a visionary and his creation is a UNESCO World Heritage Site, the hall’s construction was troubled, and certain problems have never been solved. Years of testing have produced a new plan for the concert hall’s acoustics — as well as for more basic matters.

“The air conditioning system is hopeless,” said Rory Jeffes, the leader of Opera Australia, who for many years was managing director of the Sydney Symphony Orchestra, which plays in the opera house. “It blows out of cannon ports up above, and then falls onto the stage, and very often turns the pages of the musicians as they play.”

The complex has been in constant use since it opened. It hosts nearly 2,000 events a year, attended by about 1.4 million people, in five theaters and two outdoor spaces. A total of nearly 11 million visitors per year tramp around the public spaces, inside and out.

Louise Herron, the opera house’s chief executive, arrived eight years ago for what she saw as an opportunity to finally accomplish the rehabilitation the institution had been eyeing for decades. “I said, ‘I would like to renew the opera house for future generations,’” she recalled.

Ms. Herron put together the hundreds of millions in funding, mostly from government sources. She said she quickly saw that while the acoustics and electrical wiring needed attention, so did the customers.

“Early on I went to see Reynold Levy,” then the president of Lincoln Center, she recalled in a recent interview in her office. “I said, ‘What do you worry about?’ He said, ‘I worry about train timetables, and I worry about the car park.’ That gave me the license to worry about those things.”

When it came to the customer experience, however, the opera house had to contend with the Scylla and Charybdis of modern renovation: accessibility and historical heritage. “Everything, absolutely everything, is heritage,” Mr. Rosicky said, meaning that alterations were limited or prohibited because the building is a historical landmark. “All the bathrooms, they are all heritage; the toilets, the taps, the clothes hangers, everything.”

In the 1960s, accessibility issues were an afterthought, and to this day getting to a bathroom at the Sydney Opera House is not easy. At a recent Sydney Symphony performance, a visitor set out from a box seat above the orchestra to find a restroom, and found himself traversing some 110 steps, up and down — each way.

As a consequence, some visitors have never seen the opera house’s spectacular common area, the elevated North Foyer, where before-show talks are given and concertgoers can sip wine during intermission while gazing out at Sydney’s sparkling bridge and harbor.

Installing elevators would not be as easy as it sounds. Utzon’s sails are shells; inside, exquisitely nested, are smaller shells containing the performance halls, which themselves are ringed by the walkways and stairs the audiences use. The structures don’t have sides or a back where new elements like elevators could be easily introduced. The renovation architects, ARM Architecture, settled on sluicing in small-footprint glass elevators on outside corners of each of the complex’s halls.

That created a new problem: how to achieve pedestrian access to those corners. The concert hall is embraced by two giant parentheses of stairs, which rise to the North Foyer and the elevated back of the hall. With no other place to go, the architects are puncturing the grandest of these stairs to construct a tunnel that will take visitors with mobility issues to the new elevators.

“It’s really important that the opera house belongs to everyone,” Ms. Herron said.

The creation of the Sydney Opera House was an arduous process, marked by setbacks and compromise. Its genesis was in 1947, when the Sydney Symphony hired a British conductor, Eugene Goossens, to help give the orchestra and the city cultural prestige. The vibrant Goossens adopted Sydney as his own, discovering the young soprano Joan Sutherland, who went on to become an opera superstar.

He found support for a new opera house from the premier, or governor, of the state of New South Wales, Joe Cahill, a stout union man who bought into the idea that Sydney needed big ideas for a big future. The year was 1956; a worldwide call for designs was put out. The state began to prepare the site, and established a lottery to pay for it.

The unexpected winner of the design competition was the brilliant and iconoclastic Utzon. The wild surmise of his design sketches beguiled virtually all who saw them. Privately, Utzon hoped he could figure out how to build it.

He and Cahill assured Australians that construction would take four years. But Utzon and hundreds of engineers toiled, fought and sometimes despaired as they tried to figure out how to create giant arcing slices of concrete that could stand up without the use of columns.

A 1960s-era documentary on the delays called the project an “Antipodean Tower of Babel.” Utzon’s lack of progress eventually brought him to a confrontation with the state government, and he was forced off the project, the cost of which eventually spiraled to more than 10 times the original estimate.

After resigning, Utzon left the country and never returned to see the completed building. The work was finished by the young Australian architect Peter Hall, who solved many lingering issues and designed the luscious interiors. Queen Elizabeth II attended the opening ceremony on Oct. 20, 1973 — 16 years after Utzon’s design was revealed.

Some sniffed at the new building. “This circus tent is not architecture,” said Frank Lloyd Wright. But it swiftly became widely beloved, contributing far more than it cost to Australia’s tourism industry.

“We are the only country in the world recognized globally by an arts center,” said Mr. Jeffes, the Opera Australia executive.

One problem that was never adequately addressed was how to make the concert hall work for a symphonic performance. “The main criticism is the variability of it all,” Andrew Hayne, a principal of ARM, the architecture firm, said during a recent walk-through. He pointed to the great length of the hall: “The energy finds it very hard to get all the way to the back.”

He then looked up to Hall’s kaleidoscopic ceiling: “And the crown, while spectacular, is very tall above the stage.” Players have long complained that their music wafts upward and that they can’t hear themselves.

Years ago, the hall installed clear plastic doughnuts above the stage to push the sound outward, but the highly reflective stylings of the interior and the large size of the hall still make for a sonic mess.

Acousticians have proposed several solutions. The doughnuts will be replaced by curved sound reflectors — magenta, to match the vivid carpet of the North Foyer — above the stage for acoustic concerts. A thick laminate of carved wooden waves will cover the walls behind the orchestra and stretch out into the hall. These are designed to break up the sound and distribute it more evenly.

Showing a visitor around, Ms. Herron, the opera house executive, was keenly attuned to the many features of the building, old and new. At one point, she bounded into a women’s bathroom to show off a new row of stalls. At another, she pointed out the number “17,” scrawled on a concrete pillar in indelible ink in one of the public areas of the concert hall. It’s one of the marks left by the original contractors to designate points that were 17 feet above sea level.

Such reminders, she noted, are everywhere: Occasional spot work on the building has left jarring juxtapositions of old and new concrete.

“We don’t want them to make perfect concrete and then try to blend it in with imperfect concrete,” said Mr. Rosicky. “You’re not allowed to pretend it was always there.”

It’s as if the Sydney Opera House is allowed to tell its own story, he said. “It’s loud and expressive enough to do that.”

Fascinating article, Len, thanks! I see that the hall has similar acoustic problems to Avery Fisher (now David Geffen) Hall in NY, in that it's hard to hear yourself and other musicians on stage. One thing that did intrigue me though, is the cost of renovation. Here in NY updating David Geffen Hall is pegged at $500 million, while in Australia it's only about $200 million American. WOW! What a difference! I knew NY unions were expensive, but not by so much!
Top

It's very much needed. the Opera House, so impressive on the outside, is small and muddy-sounding on the inside. When Opera Australia brings productions to Melbourne the sets are too small for the much bigger stage. The Sydney Opera House does well partly because it's a tourist attraction, and visitors want to be able to say they've seen something there, and I have no problem with that. Some of them will become real opera lovers.
Top

barney wrote: ↑
Sun Mar 08, 2020 5:39 pm
The Sydney Opera House does well partly because it's a tourist attraction, and visitors want to be able to say they've seen something there

Barney it's a place we always thought about getting to-a niece of ours got there as a student-the opera she got to see and she knows nothing about opera-LULU-talk about bad luck. Regards, Len

barney wrote: ↑
Sun Mar 08, 2020 5:39 pm
The Sydney Opera House does well partly because it's a tourist attraction, and visitors want to be able to say they've seen something there

Barney it's a place we always thought about getting to-a niece of ours got there as a student-the opera she got to see and she knows nothing about opera-LULU-talk about bad luck. Regards, Len

Perhaps unlikely to turn her into an immediate lover of the art form, Len.

I'm not sure where they will play instead, but it will be smaller theatres.
Of vastly more importance (to me, at any rate), the State Theatre in Melbourne is also closing for improvements that will take several months, including our spring season. Opera Australia will have to play at smaller Melbourne theatres that normally do musicals, of which we have several - though not so many as Broadway. The State Theatre sits 2079. the Princess seats 1488, Her Majesty's 1706 but the Regent 2162. Maybe they will go there. It hasn't been announced yet.
Perhaps I'll just have to get my opera at the Met. I wish!
Top

Barney come on over! Regards, Len