Gotta admit I never heard of him. Len 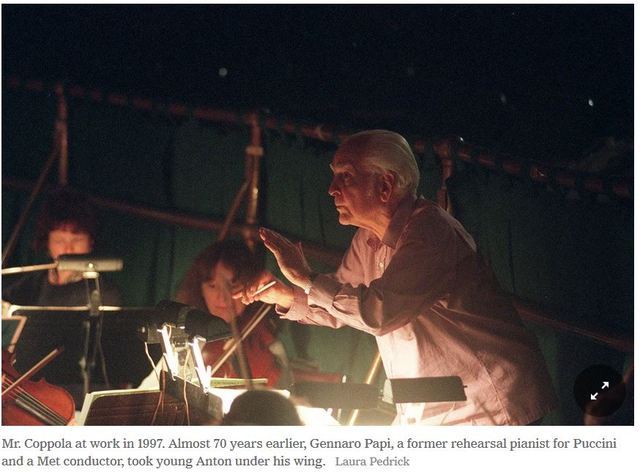 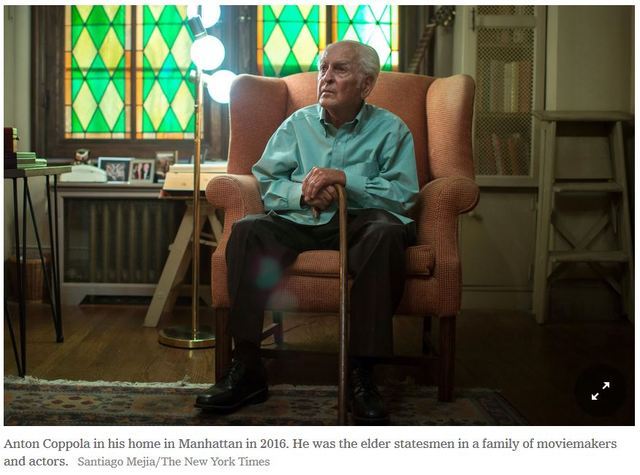 A seemingly ageless composer and maestro, he completed Puccini’s unfinished “Turandot,” wrote the opera “Sacco and Vanzetti” and led a concert of his music at 100.

Anton Coppola, who appeared in the children’s chorus for the 1926 American premiere of Puccini’s uncompleted “Turandot,” conducted his own ending to the work some nine decades later, and in between had one of the longest careers as a maestro in modern times, died on Monday at his home in Manhattan. He was 102.

Anton, too, had a role in the family film business, appearing as the conductor of the opera “Cavalleria Rusticana” in a scene from “Godfather III” (1990) and conducting the score to Francis Ford Coppola’s “Bram Stoker’s Dracula” (1992).

The creative flow went the other way. Francis Ford Coppola suggested that his Uncle Anton write an opera about Sacco and Vanzetti, the Italian anarchists executed — wrongly, many believe — in 1927. The resulting work was what Anton Coppola considered his crowning glory, “Sacco and Vanzetti.”

The opera had its premiere in 2001 at Opera Tampa, where Mr. Coppola was the founding artistic director and conductor from 1995 to 2012.

“Coppola indulges in some hoary rhetorical red flag-waving,” Lawrence A. Johnson wrote of the work in Opera News, “but radical-chic politics, happily, take a back seat to the fascinating story and music.”

The work was distinguished by a “highly accessible musical style” redolent of Puccini and Barber, Mr. Johnson said, adding, “If ‘Sacco and Vanzetti’ has a fault, it is that Coppola’s music and lyrics lack an individual voice.”

It was never staged elsewhere, to Mr. Coppola’s disappointment. He followed up with another opera, “Lady Swanwhite,” based on a Strindberg play, that was given a performance at Opera Tampa in early 2019.

Mr. Coppola remained active on the podium into his final years, leading a concert of his own music with the Tampa company at a gala to mark his 100th birthday.

For much of the previous eight decades, he conducted many of the nation’s medium-size and larger opera companies, including New York City Opera and the operas in Cincinnati, San Francisco, Seattle and Tampa. He may, in fact, have had the longest conducting career in recent history. Arturo Toscanini retired at the tender age of 87, and Leopold Stokowski left the podium at 90.

While his heart lay in the core of the Italian opera repertory, especially the works of Verdi and Puccini, Mr. Coppola conducted many contemporary works as well, including the premieres of “Lizzie Borden,” by Jack Beeson, at the New York City Opera in 1965, and “Of Mice and Men,” by Carlisle Floyd, at the Seattle Opera in 1970. “He led a fluent, tasteful, wholly musical performance,” the critic Robert Commanday wrote of the Floyd premiere in The Times.

Mr. Coppola had a reputation as an autocrat, more typical of the imperious maestros of his time than today’s comparatively democratic podium-ites. Conducting “has to be a dictatorship, and in that way he was a great leader,” the baritone Sherrill Milnes, who worked with him, once said. Other vocal giants like Mario del Monaco, George London, Roberta Peters, Leonard Warren and Luciano Pavarotti also sang under Mr. Coppola’s baton.

Mr. Coppola was busy on Broadway early in his career. He was music director of the “New Faces of 1952” revue that put Paul Lynde, Eartha Kitt and Carol Lawrence on the map. Mel Brooks helped write some of the skits.

“He used to imitate me by waving his arms like a mad conductor,” Mr. Coppola said.

His success with “New Faces” led to an engagement as musical director of “The Boy Friend,” which in 1954 introduced to Broadway an 18-year-old British import named Julie Andrews. Other shows followed.

Mr. Coppola said the difference between operas and musicals was that in opera he had the main dressing room and that on Broadway “the stagehands hammer a nail down in the boiler room and say, ‘You can hang your coat there.’”

He was on the conducting faculty of the Manhattan School of Music from 1964 to 1980.

Antonio Coppola was born on March 21, 1917, in Ocean Hill, Brooklyn, but grew up mostly in East Harlem. His Italian immigrant father, Agostino, was a toolmaker; his mother, Maria (Zasa) Coppola, was a homemaker. He was the fifth of seven brothers, all of whom were encouraged to study music. Anton took up piano.

As a child, Anton was taken by his mother to see Gounod’s “Faust,” put on by a small touring company. “When the lights came down I saw the figure of a little man walk into the pit and start to wave his hands,” Mr. Coppola recalled. “When all this wonderful music was coming out, I turned to my mom and said, ‘That’s what I want to do.’”

He appeared in the groundbreaking 1926 “Turandot,” conducted by Tullio Serafin and starring Maria Jeritza and Giacomo Lauri-Volpi, after auditioning for the Metropolitan Opera’s children’s chorus.

In 1930, an opera-loving uncle introduced him to Gennaro Papi, a Met conductor who was a former rehearsal pianist for Puccini himself. Papi noticed that the boy was carrying a score of Puccini’s “La Bohème.” He was impressed, and took Anton under his wing. Anton would attend Papi’s performances, and the two would dissect them afterward. Papi also passed on Puccini’s own insights about his scores.

Anton attended Stuyvesant High School in Manhattan and entered the Juilliard School at about 16. He left for a job with the orchestra and opera programs of the Depression-era federal Works Progress Administration, conducting his first opera, Saint-Saëns’ “Samson et Dalila,” when he was 18.

Papi had suggested that Anton learn an instrument and play in an orchestra to round out his experience. Mr. Coppola chose the oboe and became good enough to enter the Radio City Music Hall orchestra at 19. With the start of World War II, he enlisted in the Army and served four years, mainly as a bandmaster in Texas.

“Everybody had to contribute in some way,” he said. “This was my contribution. Completely worthless, as far as I’m concerned.” His discharge papers misspelled his first name, Antonio, as Anton, and he decided to adopt it professionally.

He made his debut in 1947 with the San Carlo Opera Company, which was mainly a touring troupe, in a production of “Carmen” mounted at the resplendently Art Deco-style Center Theater in Rockefeller Center, a former movie palace that was demolished in 1954. He went on to plow through other mainstays of the Italian opera repertory over the next six months with the company.

Mr. Coppola later returned to Radio City as the orchestra’s conductor and at one point noticed a dancer there. “Instead of looking at the score I looked at this young lady and she became my wife,” he said. He and Almerinda Drago married in 1950, on his 33rd birthday.

Along with her and his daughter, Lucia, he is survived by a son, Bruno; six grandchildren; and a number of great-grandchildren.

Mr. Coppola contributed to the family art into his 90s. A later generation of Coppolas — the cousins Roman Coppola (son of Francis Ford Coppola) and Jason Schwartzman (son of Talia Shire) — recruited him to appear in “Mozart in the Jungle,” their Amazon series about classical music musicians in New York. In one episode from Season 2, released in 2015, he plays a retired oboist who reminisces about his life in music and prepares vodka martinis for young visitors.

Into his last years, after working on a card table in his apartment overlooking Central Park writing music or arranging scores, he would finish each day with the same cocktail.

Re: Anton Coppola, Opera Conductor in Filmmaking Clan, Dies at 102

Although the article doesn't mention it, Coppola was a regular conductor with DiCapo Opera as well. As an example, he led La Traviata when it starred a winner in my competition, Olexandra Hrabova, when she received rave reviews in Opera News. Coppola was a fine maestro and he will be missed.
Top

Re: Anton Coppola, Opera Conductor in Filmmaking Clan, Dies at 102

He was a presence at Manhattan School of Music when I studied there. And I remember him from performances he conducted and from a conducting class I took.
Donald Isler
Top
Post Reply
3 posts • Page 1 of 1

Users browsing this forum: No registered users and 14 guests