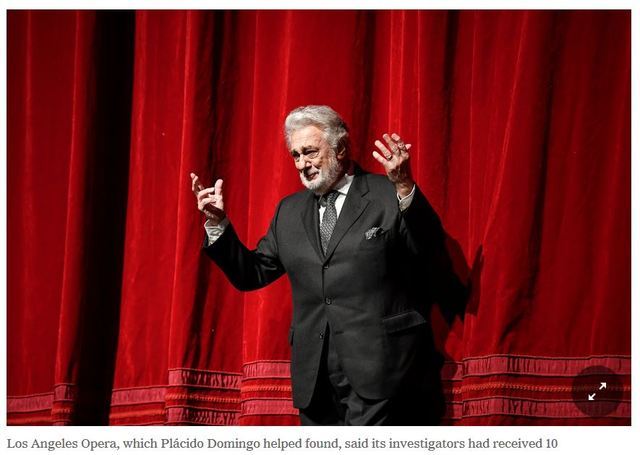 The company said it had received 10 accusations of “inappropriate conduct” by the opera star, who has begun to face cancellations in Europe as well as America.

Ever since sexual harassment allegations against the opera star Plácido Domingo surfaced last summer, the music world has been awaiting the results of an investigation by Los Angeles Opera, a company Mr. Domingo helped found and later led.

The company released those findings on Tuesday: It said that its investigators had received 10 accusations that Mr. Domingo had engaged in “inappropriate conduct” with women between 1986 and 2019, and that they “deemed the allegations to be credible.”

“The level of discomfort reported by the women varied, ranging from some women stating they were not uncomfortable to others who described significant trauma,” the company said in a summary of the inquiry, which was conducted by the law firm of Gibson, Dunn & Crutcher. The summary did not provide details of the individual accusations.

The release of the findings comes at a crucial moment in the career of Mr. Domingo, who at 79 has remained one of the biggest stars in opera. While American arts organizations swiftly canceled his performances after the allegations against him became public, European institutions largely stood by him, saying they would await investigations in Los Angeles and elsewhere.

Los Angeles Opera said that Mr. Domingo, who cooperated and sat for an interview with the investigators, had “denied all allegations of unwanted contact and maintained that all his interactions were consensual.” The report added, without elaborating, that investigators “often found him to be sincere in his denials but found some of them to be less credible or lacking in awareness.”

Mr. Domingo did not publicly respond to the findings by Tuesday evening.

Last summer several women told The Associated Press, which first reported the allegations against Mr. Domingo, that they believed their careers had been harmed when they rebuffed his unwanted advances, which included “touching, persistent requests for private get-togethers, late-night phone calls and sudden attempts to kiss them on the lips.” It reported that one mezzo-soprano at Los Angeles Opera, who was not named, said that Mr. Domingo had pursued her so aggressively that she got panic attacks. She eventually had sex with him, The A.P. reported, but then cut off physical contact — a move she believed had derailed her career.

Los Angeles Opera, however, said its investigation had “found no evidence that Mr. Domingo ever engaged in a quid pro quo or retaliated against any woman by not casting or otherwise hiring her at L.A. Opera, especially since casting and other hiring decisions are complex, performance-specific and determined by multiple people.”

Debra Katz, an attorney who represents several women who have accused Mr. Domingo of sexual harassment, said she was disappointed with the finding that there had been no quid pro quo or retaliation. She said that one of her clients, a singer named Angela Turner Wilson, said that while Mr. Domingo was making advances to her in Washington (where they appeared in an opera together in 1999), he repeatedly suggested that she would be perfect for roles in Los Angeles.

That all changed once Ms. Turner rejected him, Ms. Katz said: “All those opportunities dried up.”

It was not immediately clear how European companies would respond to Los Angeles’s findings. Shortly before they were released, the Hamburg State Opera announced that Mr. Domingo had withdrawn from his coming performances there later this month, citing his concerns about the coronavirus, which has already shut down opera performances in several parts of Europe.


But there are already signs that Mr. Domingo’s support in Europe is weakening.

Two weeks ago, the union representing American opera performers, the American Guild of Musical Artists, released the results of its own inquiry, which found that Mr. Domingo had engaged in “inappropriate activity.” The government in his native Spain responded by canceling several of his upcoming performances; the Royal Opera House in London announced that he had withdrawn from an upcoming run; and several other prominent institutions said that they were re-evaluating his future appearances.

When the union released its conclusions, Mr. Domingo said in a statement that he accepted “full responsibility for his actions” and was “truly sorry” for the hurt he had caused women. But when some European institutions cited his apology as a reason to cancel or re-evaluate his appearances, he revised his initial statement, saying, “I have never behaved aggressively toward anybody, nor have I ever done anything to obstruct or hurt the career of anybody.”

Los Angeles Opera said that Gibson Dunn’s investigators, led by Debra Wong Yang, a former United States attorney and judge, had interviewed 44 people — including some who reported misconduct as well as executives and board members — and collected roughly 500,000 documents, reviewing several thousand that related to the allegations.

Christopher Koelsch, who has been Los Angeles Opera’s president and chief executive officer since 2012, released the summary of the findings to the company’s staff on Tuesday afternoon and pledged to work to change the culture of the company and to strengthen its measures for preventing sexual harassment and misconduct. He wrote that the company sincerely apologized.

“On a personal level, I am troubled, and regret, that individuals engaged with the company may have felt disempowered, vulnerable or unheeded in any way,” he wrote. “We have learned through this process that there is a widespread, industrywide hesitancy to report harassment, and it is critical to our future that we work to build trust and transparency with one another.”

Re: Allegations Against Plácido Domingo Deemed Credible by L.A. Opera