I see this production was cancelled due to the coronavirus pandemic-it looked quite interesting. Len 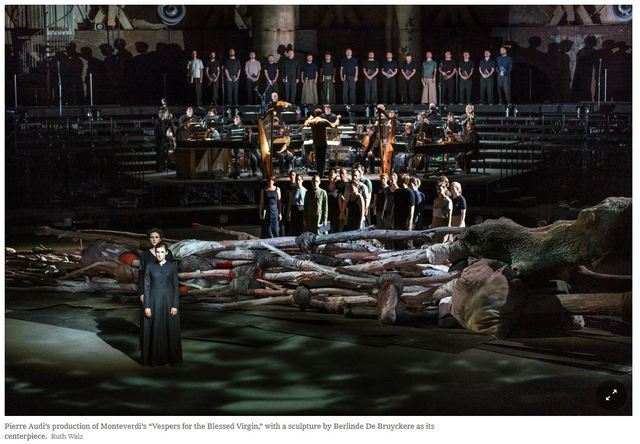 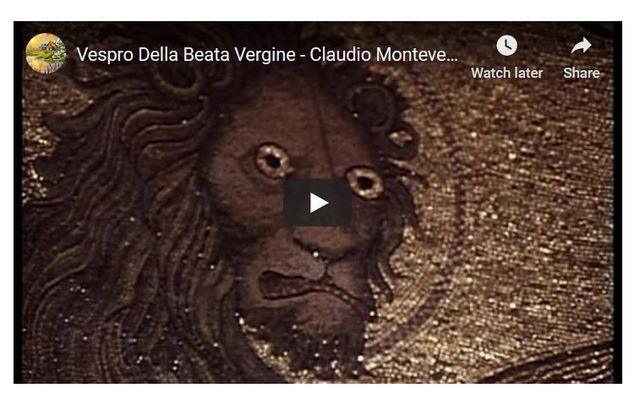 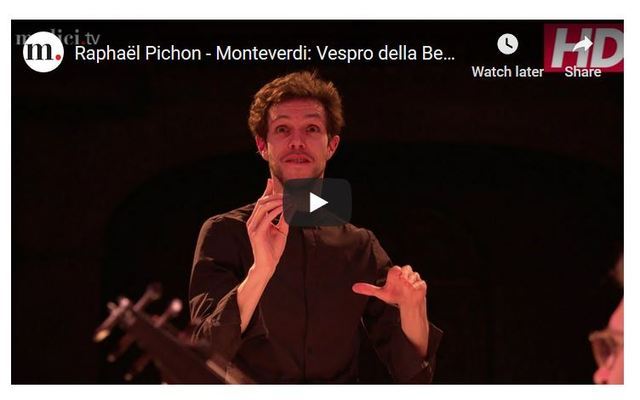 Pierre Audi’s staging of the composer’s “theater in the sound,” opening this month, is centered on a haunting and an enormous wax sculpture.

Note: The production in this article has been canceled as part of the response to the coronavirus pandemic.

When an immersive performance of Claudio Monteverdi’s “Vespro Della Beata Vergine” (“Vespers for the Blessed Virgin”) comes to the Park Avenue Armory this month, it may not be so different from how the piece was first presented in Europe four centuries ago.

“Opera houses did not yet exist really, so the composers were often writing for reception halls, like in the Palazzo Pitti in Florence,” said the French conductor Raphaël Pichon, who will be making his U.S. debut in the production, which opens on March 21 in a similarly vast space: the Armory’s Wade Thompson Drill Hall.

Although the date of their original premiere is uncertain, the “Vespers” were first published in 1610. The more players-in-front-of-audience approach to concert performance would only become predominant in the 18th century, with the rise of the symphony orchestra. So, while the Armory’s immersive style may strike some as a contemporary feature, it was, Mr. Pichon said, “perfectly logical.”


Behind the staging is Pierre Audi, the Armory’s artistic director, who first presented the “Vespers” for the Holland Festival in Amsterdam three years ago. (It is a coproduction with the Dutch National Opera, which Mr. Audi used to also run.) And at its heart is a giant, haunting sculpture by the Belgian artist Berlinde de Bruyckere.

This isn’t Mr. Audi’s first outing with the works of Monteverdi. He directed a celebrated cycle of the composer’s three major operas — “L’Orfeo,” “Il Ritorno d’Ulisse in Patria” and “L’Incoronazione di Poppea” — in 1990, and in 2017 set his sights on the large-scale “Vespers” to celebrate the 450th anniversary of Monteverdi’s birth.

At the outset, Mr. Audi and Mr. Pichon were captivated by the spatial qualities of Monteverdi’s music. The “Vespers” were written at a time when the composer was hoping to become music director at Saint Mark’s Basilica in Venice, a position he assumed in 1613, and were likely conceived with that monumental performance venue in mind.

“It’s not an opera like all his other pieces, but it has theater in the sound of it,” Mr. Audi said in an interview. “The music was meant to surround the audience, come from different balconies, different floors, different levels. It engulfs the audience in its rituals, and we wanted to imagine a staging that would give this feeling of immersive sound back to the listener.”

In Amsterdam, the “Vespers” were staged in the Gashouder — a massive, cylindrical former gasometer that now serves as a cultural venue and a nightclub. (It’s also where Mr. Audi presented “Aus Licht,” his abridgment of Karlheinz Stockhausen’s seven-opera cycle “Licht,” at last year’s Holland Festival.) The space captured his and Mr. Pichon’s imagination instantly. They envisioned a performance that would create a sense of secular ritual — “not so much a staging,” Mr. Audi said, “but a kind of theatrical event.”

They invited Ms. de Bruyckere to contribute her enormous wax sculpture “Kreupelhout — Cripplewood” (2013), which was unveiled at the Belgian pavilion of the Venice Biennale in 2013. The work later toured, with a stop including Hauser & Wirth in New York in 2016. “Vespers” will bring it back to the city as a nearly 60-foot-long centerpiece for the production.

Ms. de Bruyckere said she based “Kreupelhout” on a downed elm tree she discovered in a field near her country home in Burgundy, France. It reminded her of a wounded body — more specifically, of Saint Sebastian, who as it happens was revered in Monteverdi’s Venice as a protector against the plague. Completed in wax with pale hints of pale green, pink and red, the sculpture resembles a massive, severed limb. In the context of the “Vespers,” it seems like a modern relic, the skeleton of some departed saint.

After working together on Pascal Dusapin’s 2015 opera “Penthesilea” at the Théâtre Royal de la Monnaie in Brussels, Mr. Audi and Ms. de Bruyckere were eager for a reunion. And, she said, “Monteverdi is really my favorite music, the music I love the most.”

Her sculptures regularly take up themes of brutality, suffering, mourning and tenderness. But, Ms. de Bruyckere said, “I always want my work to give some comfort.” As part of the “Vespers,” “Kreupelhout” functions as an allegorical device, disclosing new levels of meaning in time with the stateliness and grandeur of Monteverdi’s score.

Alongside Ms. de Bruyckere’s sculpture, Monteverdi’s work acquires a new depth of contemplative majesty, its peaceful and melancholy strains evoking reflection on a modern world that, in recent years, has become increasingly fragmented and imperiled. It’s a fitting addition to the Armory’s preoccupation with existential themes lately, in productions like “Judgment Day” and coming stagings of “Hamlet” and the “Oresteia.”

“Sometimes,” Mr. Audi said, “what we need is to go to the theater or to a communal event in which we can somehow experience two hours of spiritual beauty, force ourselves to stop, and try to believe in something better than what we have to deal with in the world right now.”

In Mr. Audi’s staging, Ensemble Pygmalion — the period choral and instrumental group led by Mr. Pichon — moves throughout the space, adopting different positions in relation to the audience. They advance, withdraw and approach in pairs and small groups; they sit, recline on the floor and seem to search. Their flood of sound charts a ceremonial choreography, creating what Mr. Audi described as a “theater of sound,” “music in space” — not a stage setting, but an aural one.

Mr. Pichon first encountered the “Vespers” when he was a 10-year-old chorister. It was a shocking experience of acoustic wonder that, he said, “changed my life.” With the Armory’s production, he is aiming to communicate the same astonishment he felt as a boy during his earliest experiences singing in cathedral settings, with their magical interplay of architecture and sound.

Monteverdi’s writing in the “Vespers” is organized around a dazzling array of what, for him, were old and new forms: hymn, Gregorian chant, polyphony, operatic monody, arioso and embellished virtuoso singing. Monteverdi poured all of his latest technical innovations into the work, having by that time completed one of the world’s first operas, “L’Orfeo,” in 1607. (The opening fanfare of the “Vespers” is lifted directly from that opera’s introductory toccata, establishing a continuity of mood and method between the two works.)

Given its passionate intensity and structural variety, the “Vespers” pose unusual challenges for performers. “The piece asks for special virtuosity from the singers, for total investment all the time,” Mr. Pichon said. “It’s really performance like sports are performance.”

Monteverdi, he added, is “sometimes writing in really archaic styles from the Renaissance, and then two bars later it’s really modern and he’s experimenting with new things.” That adventurousness is what Mr. Audi finds especially thrilling about in the music. “It’s amazing in 2020 to appreciate the freedom that a composer could have and dared to have at that time,” he said. “And, for a Baroque chorus, it’s one of the biggest tests to be able to master a piece like this.”

The era in which Monteverdi was composing was one of the most exciting in music history, Mr. Pichon said, because it was “like a laboratory,” adding that it was “a unique moment when all the composers of the late Renaissance were looking not only for new forms, languages, new poetic and philosophical aspects, but also to understand space in a different way.”

Ensemble Pygmalion has garnered critical praise for its interpretations of Rameau and Bach, as well as contemporary music commissioned for period instruments. Mr. Pichon has also worked with some of Europe’s most intrepid and renowned stage directors, including Katie Mitchell, Simon McBurney and Romeo Castellucci.

At 35, Mr. Pichon is young in the field of conductors who have specialized in period-ensemble performance. Nodding to the early-music revolution of the 1970s and ’80s, he named Nikolaus Harnoncourt, William Christie and René Jacobs among his influences.

“I think now, for our generation, there is a kind of responsibility, because the legacy is huge,” Mr. Pichon said. He is less concerned with questions of historical authenticity as such and more with the power of the sound his ensemble can create. And, true to this legacy, his goal to demonstrate that “using the proper instruments for every work creates something stronger, something more essential, something that we still need.”

Too bad this was canceled, after so much deep preparation. A huge financial blow for the performers and those who financed the production with such care and attention.
Top

maestrob wrote: ↑
Fri Mar 13, 2020 11:39 am
Too bad this was canceled, after so much deep preparation. A huge financial blow for the performers and those who financed the production with such care and attention.

Brian this coronavirus is causing a lot of trouble-it sure isn't a hoax-wonder how it will all become mid and late April? Regards, Len

maestrob wrote: ↑
Fri Mar 13, 2020 11:39 am
Too bad this was canceled, after so much deep preparation. A huge financial blow for the performers and those who financed the production with such care and attention.

Brian this coronavirus is causing a lot of trouble-it sure isn't a hoax-wonder how it will all become mid and late April? Regards, Len

That's on my mind as well. We have several events scheduled and, frankly, all is up in the air as of this moment. I wish our mayor would close NYC schools: it's really ridiculous to keep public schools open when the private schools are closed already!
Top
Post Reply
4 posts • Page 1 of 1