Ironically this article shows up the very day my downstairs headphones stop charging-annoying-another problem to look into-still it isn't the coronavirus! Len 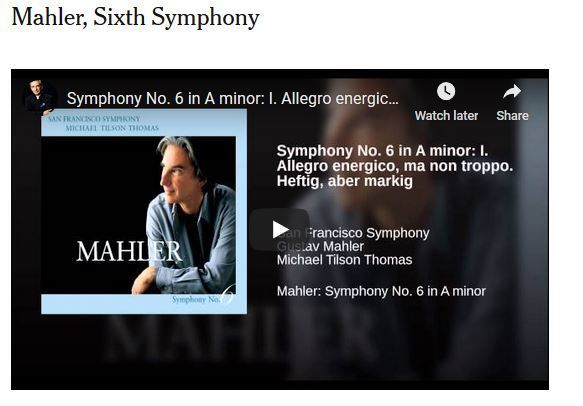 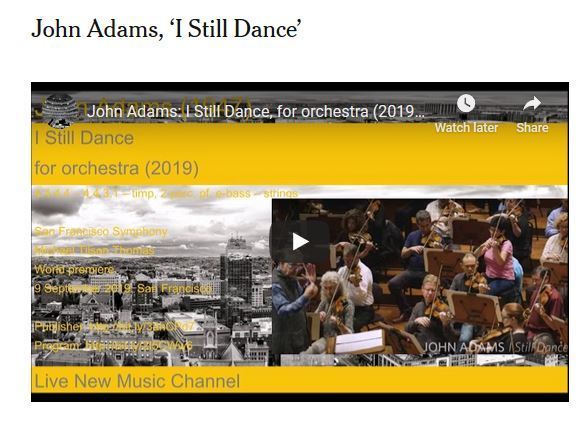 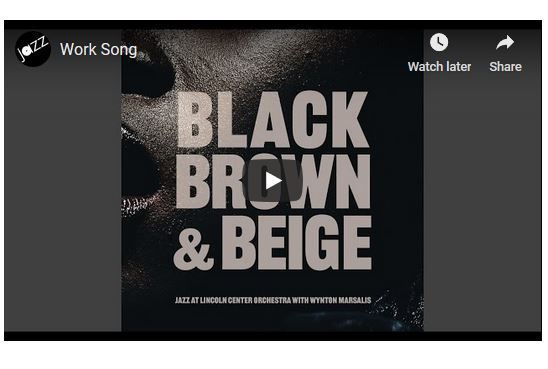 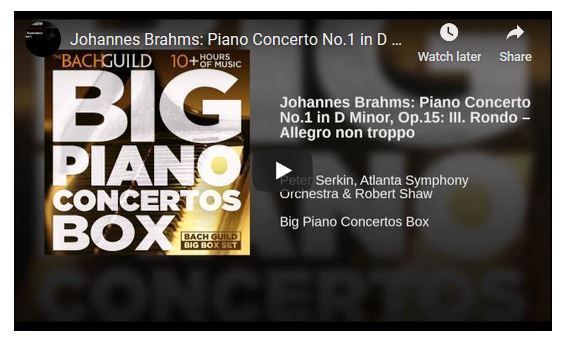 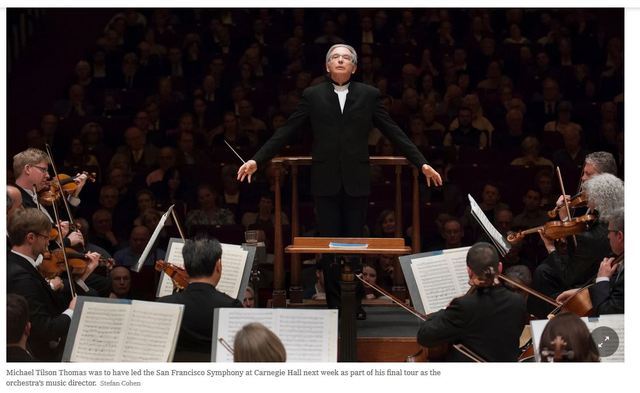 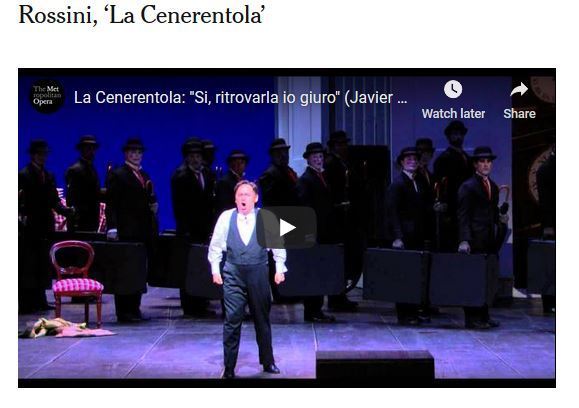 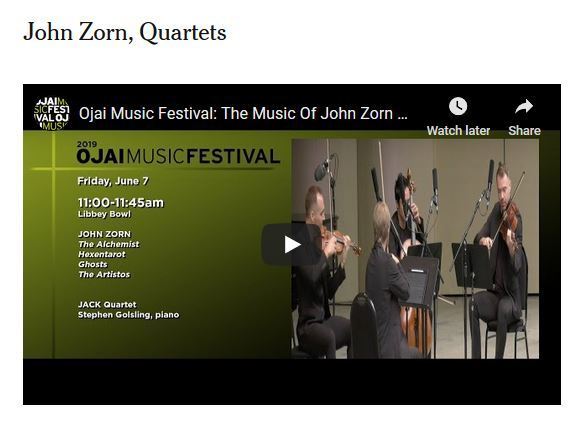 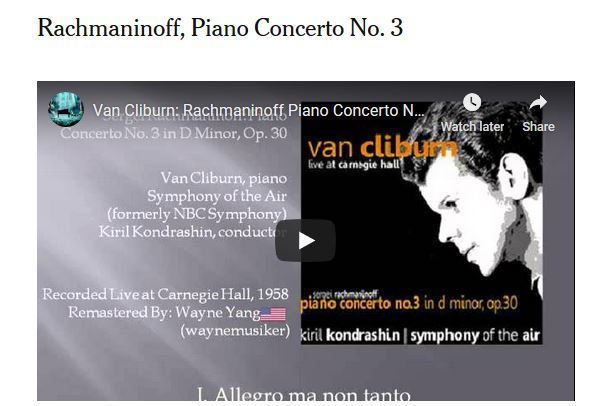 Our homebound writers choose their favorite recordings of works they were scheduled to hear live.


By The New York Times

With concert halls and opera houses closed around the world as part of bans on large gatherings aimed at curbing the coronavirus outbreak, what are homebound classical critics to do? Listen to favorite recordings of the music they were scheduled to hear live, of course! Enjoy.
Brahms, Piano Concerto No. 1

The young conductor Lahav Shani was slated to make his New York debut on Sunday leading the Rotterdam Philharmonic Orchestra in Brahms at David Geffen Hall. I was especially looking forward to hearing the Piano Concerto No. 1, with Emanuel Ax as soloist. Lately I’ve been listening to one of my favorite recordings of the work: from 1985, featuring the great pianist Peter Serkin, who died in February at 72, playing with Robert Shaw and the Atlanta Symphony Orchestra. Mr. Serkin conveys the music’s Romantic fervor while playing with lucid clarity; listen to the Bach-like textures of the finale. ANTHONY TOMMASINI

The jazz pianist Marcus Roberts has had success with his improvisatory approach to orchestral works by Gershwin and James P. Johnson, and he ought to be a frequent guest soloist with top classical ensembles. The American Symphony Orchestra had planned do its part on Thursday, with an Ellington concert at Carnegie Hall boasting new arrangements by Mr. Roberts. So I’ve turned to a fresh recording of Ellington’s “Black, Brown and Beige,” released to digital platforms by the Jazz at Lincoln Center Orchestra earlier this month. It’s a rare full recording of Ellington’s original vision of this extended work, which its composer debuted at Carnegie Hall in 1943. Start at the beginning. SETH COLTER WALLS


The vocalist-composer Meredith Monk was scheduled to play at the Big Ears Festival in Knoxville, Tenn., later this month. But her many fans need not despair too much: The project she was set to unveil, “Memory Game,” will be released on record at the end of the month and features arrangements of excerpts from her past works. David Lang’s version of “Double Fiesta” moves the piece into a more rockish space. But Ms. Monk sounds more than comfortable during the final, hurtling minute of this new recording — with pursed-lip vibrations capable of meeting the intensity of the guitarist Mark Stewart and the cellist Ashley Bathgate. SETH COLTER WALLS

The San Francisco Symphony’s season opened with a premiere in tribute to its outgoing music director, Michael Tilson Thomas. That piece, John Adams’s “I Still Dance,” was also meant to travel with the orchestra on its final tour under Mr. Thomas, including a now-canceled visit to Carnegie Hall next week. It’s a sadly quiet ending to what has been a transformative tenure for this conductor, captured with propulsive vigor in Mr. Adams’s brief but mind-bogglingly dense piece. This is vintage Adams — the heft of “Harmonielehre” and the rhythmic drive of “Short Ride in a Fast Machine” — yet more smoothly intricate. You couldn’t take in all of its richly woven textures if you tried; so listen, again and again, to see why Mr. Adams is our reigning master of orchestral writing. Like Mr. Thomas, he’s still got it. JOSHUA BARONE
Mahler, Sixth Symphony

Like his mentor, Leonard Bernstein, Mr. Thomas has been a superb Mahler conductor. He turned the San Francisco Symphony into a West Coast hotbed of this composer, giving performances of the symphonies that brought uncanny balance to these extreme scores. Both a 2001 recording of the Sixth Symphony and a new one, captured live and just released, offer plenty of passion yet also structural coherence. You won’t be disappointed with either option, though I’m sorry to not be hearing them play it at Carnegie. ANTHONY TOMMASINI
Bach, ‘The Art of Fugue’

Perhaps the prospect of hearing Daniil Trifonov make his way through “The Art of Fugue,” as he was scheduled to do at Symphony Hall in Boston on Sunday, was always a little outlandish. With its indeterminate instrumentation and its tinge of academe, few pianists have taken it up with ease or regularity — and fewer still of Mr. Trifonov’s imagination. One who has is Pierre-Laurent Aimard, who is as committed to his Bach as he is to his Boulez; Mr. Aimard’s recording on Deutsche Grammophon was set down well over a decade ago, but remains a model of clarity and intelligence, if not of introspection. DAVID ALLEN
Rossini, ‘La Cenerentola’

I try not to pass up the opportunity to hear the honey-voiced bel canto tenor Javier Camarena, who was to open this charming Cinderella work at the Metropolitan Opera on Thursday evening. (We’ll see what happens: The final performance, on April 3, is still tentatively on.) I was expecting Mr. Camarena, who returns to the Met next season in Bellini’s “Il Pirata,” to once again garner ovations with his big aria, “Si, ritrovarla io giuro.” Perhaps the audiences would have even demanded encores, as they did when he sang it here in 2014. ZACHARY WOOLFE
Rachmaninoff, Piano Concerto No. 3

The New York Philharmonic had already announced a replacement pianist for this week’s performances of Rachmaninoff’s Third Concerto, under Valery Gergiev, and I was eager to hear George Li, 24, play this daunting repertory staple. Among many superb recordings, my favorite may be Van Cliburn’s from 1958, with Kirill Kondrashin leading the Symphony of the Air. Cliburn’s playing is rhapsodic, yet also refreshingly direct and clearheaded, offering a young American’s take on an iconic Russian work. ANTHONY TOMMASINI

Anthony Braxton, a vital player and composer, was scheduled to present three concerts at Big Ears in Knoxville. In addition to the debut of his “Thunder Music” group, Mr. Braxton’s famed solo-saxophone act was on the bill. Less well known is his graphic-score-meets-electronic-music system, “Diamond Curtain Wall Music.” An online-only release from his foundation — documenting a 2011 trio performance with the guitarist Mary Halvorson and the brass player Taylor Ho Bynum — offers an intense and immersive experience of this side of Mr. Braxton’s art. SETH COLTER WALLS
John Zorn, Quartets

The JACK Quartet know how to do a marathon. Few concerts last year could match the group’s mind-expanding cycle of Elliott Carter’s five string quartets. And this weekend, they were supposed to present John Zorn’s complete, knotty quartets, over two evenings. The first program would have ended with “The Alchemist,” which opened JACK’s shorter Zorn survey at the Ojai Music Festival in June. Mystical and eerie, with a flash of Beethoven’s Grosse Fuge, the piece is a bracing glimpse into Mr. Zorn’s world of psychedelic color and wide-ranging inspiration. JOSHUA BARONE
Bach, Suites for Solo … Violin?

It may feel as if the world doesn’t need yet another recording of Bach’s solo works for violin or cello. But Johnny Gandelsman’s contributions feel necessary. His 2018 collection of the violin sonatas and partitas was revelatory in its unpretentious lightness and dancing energy. Then he went back to the studio for a transcribed version of the six cello suites, whose instrument-specific idiosyncrasies seem antithetical to the violin. Yet listen to his brisk interpretations — coming in about half an hour shorter than a typical cycle — and hear how Mr. Gandelsman doesn’t even attempt to replicate the cello’s character. These are radically weightless, at times seemingly improvisatory, and completely grounded in dance. JOSHUA BARONE

Listening to recordings on CD through headphones is something I do every day, and Tommasini mentions two of my favorites: Serkins Brahms I with Shaw/Atlanta, and Van Cliburn's live Rachmaninoff III with Kondrashin, both great recordings in my view also. Serkin's Brahms is very fine (he also recorded the second concerto with the same forces). Thanks for posting this!

Brian, you're welcome-I discovered what was wrong with my headphones-it was my fault and now I'm back in business! Regards, Len

I find headphones ideal. I live in a rather small apartment, and when I listen to my favorite music with headphones other activities might go on in my apartment. Another advantage is that I can listen with loud volume without disturbing neighbors. In my little town there are no concert halls nor operahouses, so my headset serves me well. Coronavirus or not.

parsifal wrote: ↑
Mon Mar 16, 2020 4:51 am
Another advantage is that I can listen with loud volume without disturbing neighbors. In my little town there are no concert halls nor operahouses, so my headset serves me well. Coronavirus or not.

Kjell yes wireless headphones are a staple for me-I don't disturb my wife and I can walk around the entire house and still listen to my music or with what's going on now CNN. Regards, Len
Top
Post Reply
5 posts • Page 1 of 1

Users browsing this forum: No registered users and 27 guests