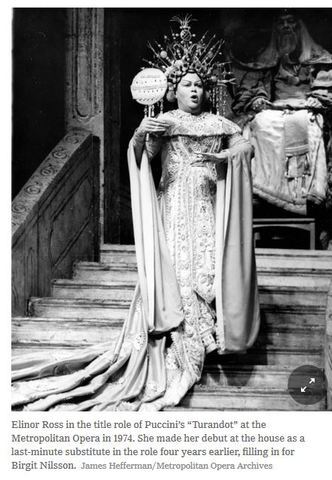 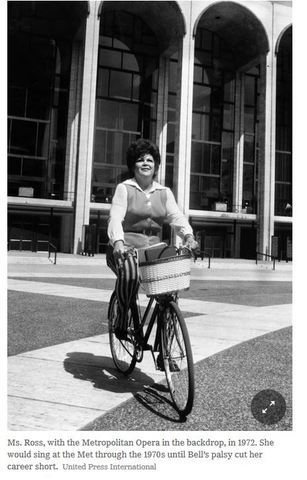 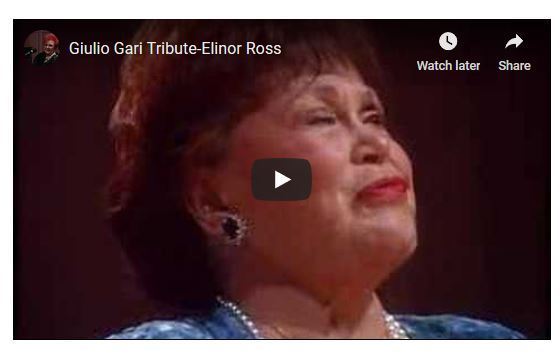 In 1970 she stepped in on short notice at the Metropolitan Opera. Nine years later, Bell’s palsy sidelined her.

Elinor Ross, a soprano who made a dramatic Metropolitan Opera debut in 1970 as a last-minute replacement in the title role of “Turandot,” but whose career was over by the end of the decade, cut short by an illness that paralyzed her facial muscles, died on March 6 in Manhattan. She was 93.

Her son, Ross Lewis, said the cause was renal failure.

Ms. Ross, who began singing professionally in the late 1950s, was best known in regional houses and overseas until June 6, 1970, when she stepped in at the Met for Birgit Nilsson, who was sidelined by a virus.

“There are few sopranos in the world who could or would choose the title role of Puccini’s ‘Turandot’ for a Metropolitan Opera debut,” Allen Hughes wrote in The New York Times, “but Elinor Ross made her first appearance with the company on Saturday night in the spectacular part (with its triply spectacular costume) and managed the feat pretty well.”

She’d had just two days of rehearsal in a practice room, without the heavy costume, which had an elaborate headdress. Her entrance was on a staircase she had never trod.

“My toes did a lot of work that night, feeling for each step,” she told Classical Singer magazine in 2012. “The director, Nathaniel Merrill, was in the wings saying, ‘Walk here, go there.’ It was terrifying, but you do it.”

She encountered a very different kind of terrifying in 1979 while singing at the Met.

“During a performance of ‘Aida,’ I couldn’t understand why I felt so strange,” she recalled in a 2008 interview with Opera News. “I woke up the next day with Bell’s palsy” — a paralysis of the muscles in the face.

“So that was my final opera performance,” she continued. “I couldn’t open my mouth for a couple of years. My voice was there — I had just started working on Isolde — but I couldn’t open one side of my mouth”


In between the Met debut and that final performance, Ms. Ross had a nice run at the house, singing numerous roles over nine years in the company. She stepped in several more times when another singer was unable to perform, including in June 1972, when Martina Arroyo, in the title role of “Aida,” fainted after the first scene.

Ms. Ross, the standby, was in the house not expecting to go on; she was there to watch her son, Mr. Lewis, then 15, make his debut as an extra — a spear carrier. In a telephone interview, Mr. Lewis recalled that someone had the foresight to give him some warning.

“They called me backstage,” he said, “because my mom showed up in the triumphal scene and they didn’t want me to scream out, ‘Mom, what are you doing here?’”

Elinor Marilyn Rosenthal (she made her surname Ross when she started performing professionally) was born on Aug. 1, 1926, in Tampa, Fla. She started singing as a girl.

“I sang everywhere — several churches in town and the synagogue,” she told The Staten Island Advance in 2013.”

After graduating from Henry B. Plant High School in Tampa, she attended Syracuse University, thinking she might follow two uncles into the medical profession. But her voice sidetracked her.

“Every time they had something to be sung in the music department, they called me,” she recalled in the interview with Classical Singer. “They told me I had talent, and I believed them.”


So she moved to New York, where William Herman, a noted teacher, took her on as a student. Her professional debut came in 1958 with the Cincinnati Opera, in a summer production of “Il Trovatore” in which she twice sang Leonora. That led to the first instance in which she was called upon to be an emergency fill-in: In the fall of 1958 the Chicago Lyric Opera brought her in to sing the role when Eileen Farrell fell ill.

“The third time I’d walked on any stage, it was in Chicago with Bjorling, Simionato, Bastianini,” she recalled — Jussi Bjorling, Giulietta Simionato and Ettore Bastianini, all veteran stars. “And there was little ol’ me from Tampa, Florida, up on that stage singing.”

Much of her early performing experience was in regional houses — she sang in Pittsburgh, Houston, New Orleans and many other cities — and in Europe and South America. Ms. Ross did not record much, but one performance, of “Norma” in 1967 at La Fenice in Venice, was captured on film by German television.

Ms. Ross made her debut at La Scala in Milan just two months before her Met debut. It was a bittersweet, and exhausting, occasion.

She had married Jerome A. Lewis, a lawyer, in 1954, but by 1970 a heart condition had made it difficult for him to travel. He nonetheless came to Italy from New York for the occasion, but the trip left him hospitalized.

“She was having to be a diva by night and his caregiver by day,” Ross Lewis recalled.

They returned to New York in time for her to fill in for Ms. Nilsson at the Met, but her husband’s condition worsened. He died six weeks after her Met debut.

Ms. Ross, though, did not have much time to pause; by the end of that year she had made her debut in several other major roles, including Aida and Tosca.

“She sang with style and spirit,” Raymond Ericson wrote of one of her performances in “Tosca” in The Times, “and in the last act — vocally the most grateful for the soprano — she was quite affecting. She also has an appealing personality. She went through Tosca’s melodramatics with sincerity and without fuss.”

In addition to her son, she is survived by two stepsons, Mitchell and Stuart Diamond; two granddaughters; and two step-grandchildren.

After her illness struck, Ms. Ross had surgery and eventually was able to give occasional concerts. In 1996, at a gala for the Giulio Gari Foundation, which supports young classical singers, she sang “Summertime,” from “Porgy and Bess.”

In the Met’s recent production of that opera, a young tenor named Tshombe Selby was in the chorus. He had befriended Ms. Ross while working as an usher at the opera house, chatting with her during rehearsals, which she would sometimes visit.

“She saw me,” Mr. Selby said at her funeral ceremony on March 8 at Central Synagogue in Manhattan, “and she accepted me as a singer. She said: ‘Stop calling me Miss Ross. I’m Elinor. We’re colleagues.’”